According to a certain Pennsylvania rodent, we're in for another six weeks of winter. After enduring the past eleven months, that'll be a cakewalk.

Last month, a longtime friend celebrated a milestone birthday. I searched through my files and turned up a set of illustrations he'd commissioned from me many years ago, which I sent to him as a birthday gift. 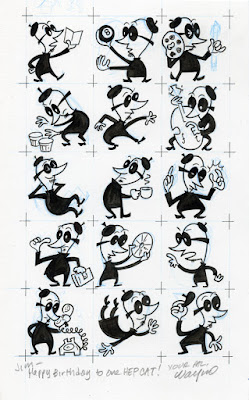 I've long forgotten the original purpose for these drawings of a character we named Dexter, but it was cool to see them again. I regret that none of these images shows Dexter holding a pipe, but I have a great pipe image found in the wild to share next week.

I still draw in ink over blue pencil today. Let's take a look at some current work to see if my style has changed much over the decades. 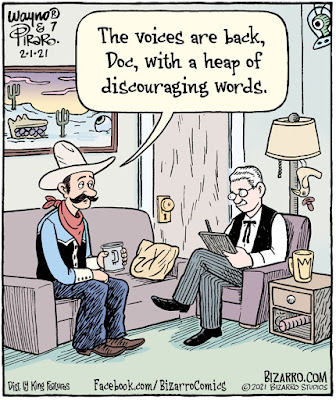 I was a child raised by television, and so were quite a few Bizarro readers. Several people noted that the doctor in this panel bears a resemblance to character actor Milburn Stone, of "Gunsmoke" fame. That was my intent, but when another reader mentioned that the layout was similar to the office set on "The Bob Newhart Show," I was surprised and had to agree. I've seen that series multiple times over the years, and its furniture placement must have stayed with me. 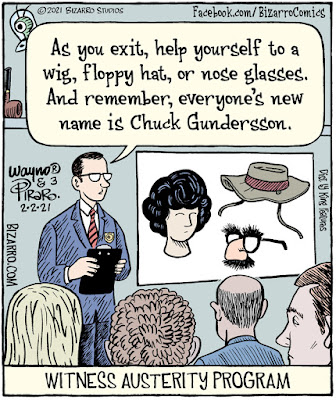 Bizarro HQ received a note of appreciation from a reader who's actually named Chuck Gunderson. The Chuck who wrote to us spells his last name with a single "s," which I take as evidence of further cost-saving measures at the Justice Department. 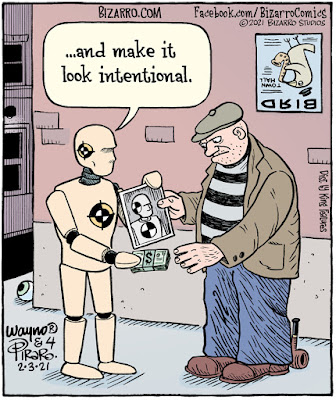 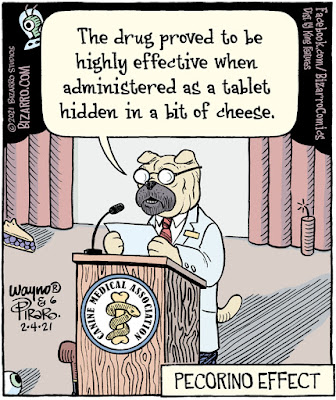 This trick might also work with humans. We'd achieve herd immunity in no time if COVID vaccines were tucked inside Chik-fil-A sandwiches. 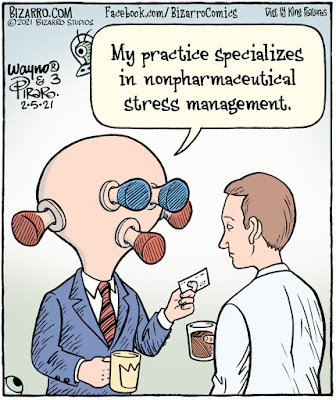 After an absence of nearly two years, this character reappears in Bizarro. 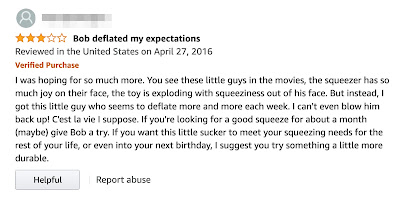 We find him to be entertaining, but his Amazon reviews are mixed. 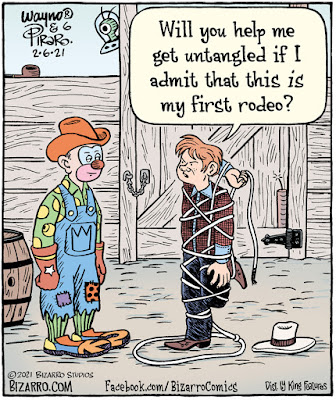 Coming full circle, we closed the week with another cowboy-themed gag.

Thanks for checking in on us. Don't forget to visit Dan Piraro's blog to see what's on his mind, and to marvel at another gorgeous, panoramic Sunday Bizarro.

Grico Samon
"Who Put the Hole in the Doughnut"

While hunkered in place, we've been doing some decluttering, and are even considering letting go of some records and compact discs. This one, however, is a keeper. The label image and digitized audio were done right here at Bizarro Studios North.

I remember finding this at a record show, in a box of singles marked "MISC/ODD," where I knew I'd strike gold. This strange and mysterious artifact has a place of honor in my little case of "bulletproof" records.

"Who Put the Hole In the Doughnut" is definitely Demented! Your fan, Dr. Demento

The flip side is super weird too. One of these days I’ll digitize it!

Thanks so much, good doctor.

That was certainly a single-minded line of questioning. But I can’t help wondering why he kept asking the same guy over and over. Perhaps hoping he’d crack?

Always enjoy your blog, and the music!! Tried to find some trace of Mr Samon, but the only thing I found was another iteration of this tune, with a backing band and female singer added. http://www.philxmilstein.com/probe/04.htm
Thanks for your contribution to my sanity, such is THAT is!