Who is this guy, anyway? 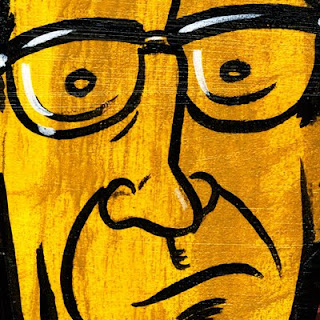 Welcome, new readers (and thanks to the regulars). Some of you may have stumbled across this blog after seeing a link in Bizarro, and this post is intended to serve as an introduction.

I'm a cartoonist, writer and illustrator, and have been contributing gags to Bizarro for a couple of years now.

I created all of this week's Bizarro cartoons, filling in as best I could for Dan Piraro's brilliant work. I completed my seven comics earlier this year, and they were put into the publishing queue two weeks ago, while Dan took a little vacation. I'm honored to be minding the store this week.

Dan's talent as a cartoonist always impressed me, long before we met. Working with him—as a collaborator, or as guest cartoonist—is a pleasure, and a high spot of my career.

Thanks for finding your way to the blog. I hope you'll become a regular.

Please also follow my Twitterings (which are brief and not ridiculously frequent), visit my illustration website or Facebook thing, check out my online store, and view my rock & roll portraits at Portland's Rock Pop Gallery.

All of my previous collaborations with Dan Piraro are archived on this blog under the Bizarro label.

•••
Now, here are this week's offerings. I'll update every day or two, adding the latest material. 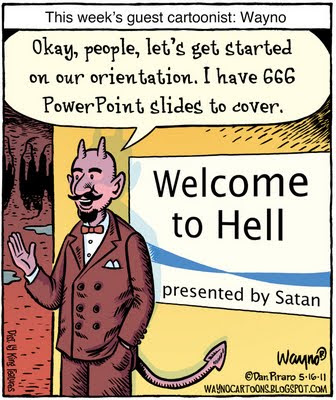 I was always curious about the significance of that number. 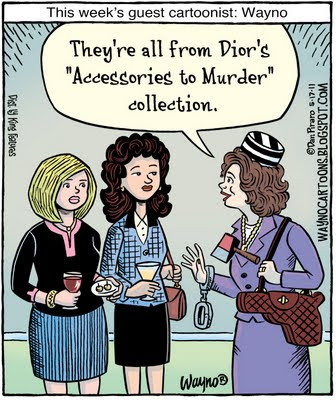 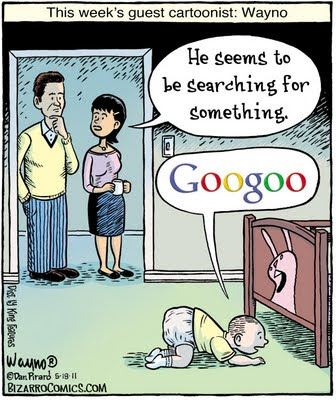 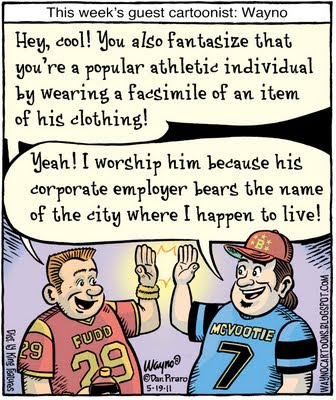 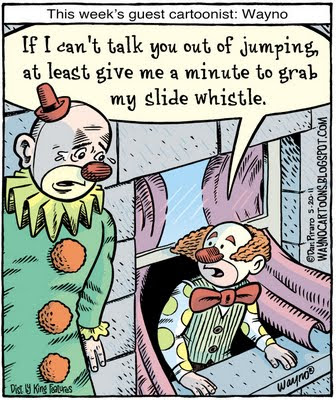 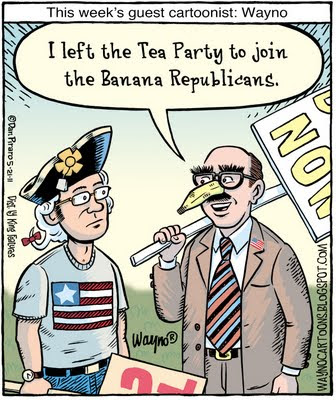 They hold rallies at shopping malls.
•••
Sunday, May 22 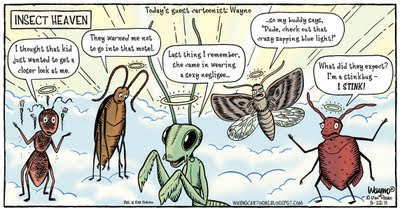 Thanks for the feedback and reposts. I hope you enjoyed the week's cartoons. Dan Piraro will retake control of Bizarro on Monday morning.
8 comments:

Here we go again, with another Bizarro gag written by Your Humble Blogger and drawn by the amazing Dan Piraro. This one should be a hit with natural scientists. 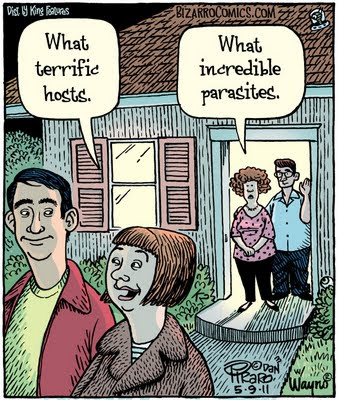 For comparison, here's my sketch of the comic: 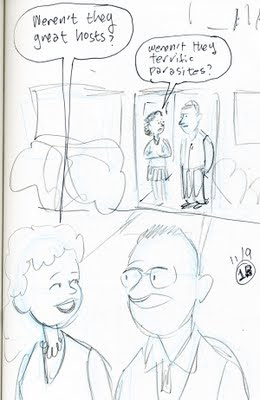 The gag is based on two different meanings of the word "host." In the social sense, a host's counterpart is a guest. The joke references the biological meaning, where a parasite seeks a host to feed on, lay eggs in, etc.
Fortunately, very few of my own social experiences led to guests becoming parasitic, and I like to think that I've never made that transition myself.Coloring this one was a little tricky, being a nighttime scene that includes illumination from the house's interior lights. I must admit, I needed some assistance from Dan to get it right, while maintaining the Bizarro look. Eventually, it came out okay.

Dan also tightened up the dialog, which works better than in the original.

•••
My temporary takeover of Bizarro begins one week from today, and in exactly a month, on June 9, Dan Piraro brings his standup comedy act to Pittsburgh, at this year's Comics For Comics event, benefiting the ToonSeum. All local readers must attend!
3 comments:

This Little Piggy Got Tattooed

Today's Bizarro, drawn by Dan Piraro and written by yours truly, takes a poke at picnicking pigs: 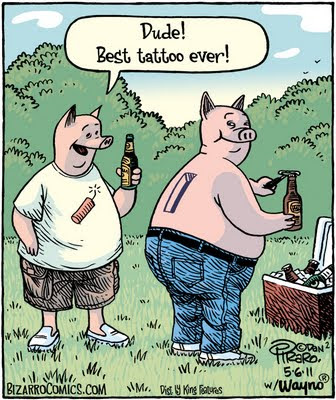 I don't recall how this idea came to me, but I liked it right away. The sketch flowed fairly quickly: 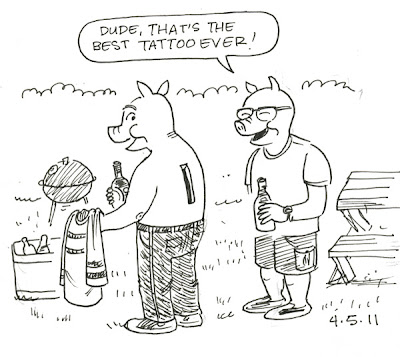 Many years ago, long before tattoos were as ubiquitous as today, I once saw an old guy with a cabinet hinge tattooed inside his elbow. At the time, I thought it was very clever. Perhaps that memory resurfaced and inspired this gag.

The coin slot tattoo made for a funny visual, though I also considered a butcher's chart, which might have been a little disturbing. Come to think of it, the butcher chart would have worked if the pig character had been a tough-guy jailbird or biker.

My piggies looked a little too buff, which Dan remedied with his portlier porkers.

Note to cartooning students: Once again, Dan Piraro rearranged the image to position the payoff (the tattoo) as far to the right side of the panel as possible, so the reader encounters it last. It's a handy rule of thumb for laying out a panel, and usually enhances the surprise of a gag.

You can search for the Bizarro label to see our previous collaborations here on the blog. The next one will appear on Monday, May 9.

Don't forget to follow my guest week takeover of Bizarro, May 16 through 22, and read Dan's blog too.
No comments: 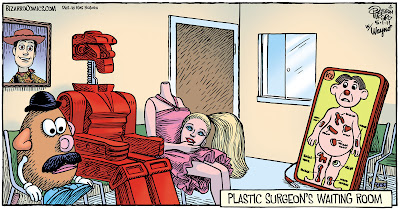 This one started out a bit differently. Early sketches showed a beheaded Barbie (or a Rock'em-Sock'em robot) being told by a doctor that he'd refer the patient to a plastic (ha!) surgeon. 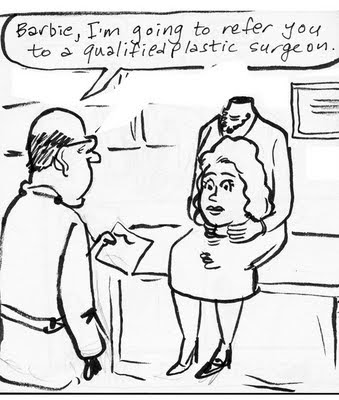 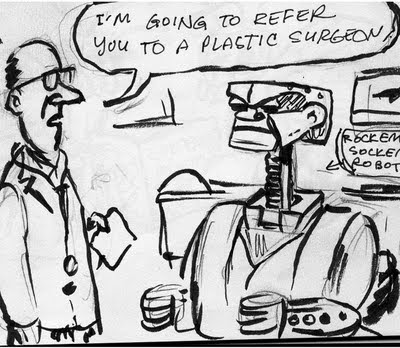 Neither of these had the zing of a truly successful gag. As I thought about other plastic toys to put in the scene, I decided against using a molded green army guy. That seemed much too close to a very unpleasant and sadly common real-life scenario.

Dan decided to place several toys in a waiting room, which is a nice solution. Not only does it have more impact with multiple patients, but all it requires is the four-word caption box. We both feel that fewer words make for a stronger gag (unless wordiness is part of the joke). Also, most papers run the Sunday comics in color, so the majority of readers will be amused by the bright colors.

Next up, here's today's head-scratcher... 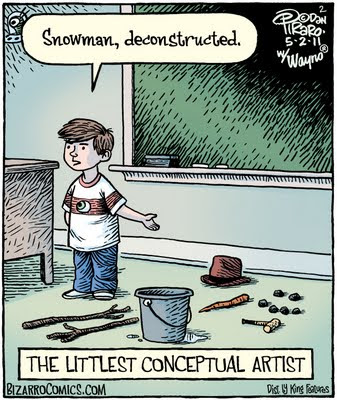 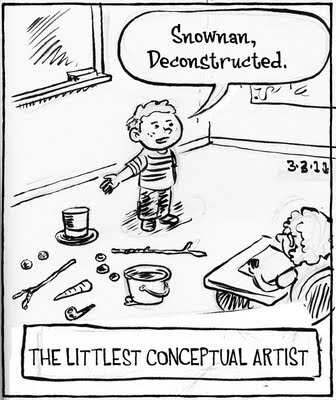 The two drawings are very similar, except Dan flipped the image horizontally. Since the English language is read left-to-right, he usually tries to position the payoff (whether it's verbal or visual) as far to the right as possible. Check out some previous comics and see how often you notice this compositional choice.


Genesis of the Joke

Several weeks ago I dropped off a poster at my friend Scott's house, and noticed a little pile of sticks and rocks on the front porch. I texted him to ask about the carefully-placed arrangement. His answer read "Snowman deconstructed," to which I replied "Highly conceptual!" Naturally, I stole the phrase from him and drew up this sketch for Bizarro.

That's right, jokes can sometimes be plucked right out of a conversation, if you have the ear to hear them and the temerity to take them and claim them as your own. Thanks, Scott!

Finally...
I am now free to make an announcement that I've been itching to post for several months: Late last year, Dan Piraro asked me to take over Bizarro for a week so he could have a little vacation, and the results will be published May 16 through May 22. That's seven consecutive days of solo work by me: writing, drawing, and coloring--the works!

Dan had hoped to get Ernie Bushmiller, but when he heard that Ernie had died in 1982, he figured I couldn't do any worse than a skeleton that's been in the ground for 30 years, so he invited me aboard.

So if you're offended, confused or enraged by any Bizarro cartoons between May 16 and May 22, don't blame Dan! All comments are welcome, and of course every comic will be posted here (and flogged on every other social networking platform, and any place I see someone with a newspaper).

I'm jazzed about this, and hope it goes over well with the loyal readership. At some point, I'm sure Dan will comment on his own blog.

There will also be two new collaborative comics appearing between now and the start of Wayno Week. They'll appear on Friday, May 6 and Monday May 9.
5 comments: