In an email message with the strip attached, Hilary said, "As these things go, it morphed." A glance at my submission sketch confirms that she richly deserves her merit badge in understatement. 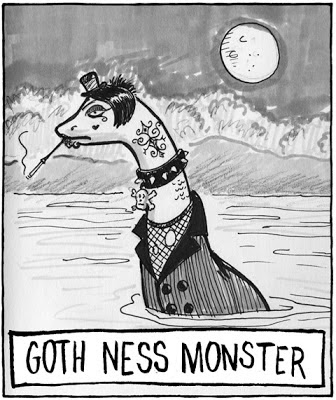 About the only thing these two cartoons have in common is the word "Ness," but Hilary was kind enough to credit me, illustrating how truly collaborative the writing process can be, with one idea sparking another.

The pun in the final comic is a major improvement, requiring the change of a single letter. Even better, that change could conceivably be a typographic error, since n and b are adjacent on a QWERTY keyboard.

"Loch Ness Mobster" rolls off the tongue much more elegantly than "Goth Ness Monster." I do like the strangeness of the original art, but Hilary's version earns a bigger laugh. Well done, HP!

My previous collaborations with Hilary, including last year's week as guest cartoonist, can be viewed in this blog's Orange Archive.
1 comment:

Email ThisBlogThis!Share to TwitterShare to FacebookShare to Pinterest
Labels: Animals, Rhymes with Orange

Kelly's Bar & Lounge, Pittsburgh's favorite joint for beer, mac & cheese, and an amazing punk/lounge/etc. jukebox, will hold its annual barleywine festival, Hell With The Lid Off, on February 16 and 17.

For the third time, I've been invited to design a poster and t-shirt for the festival. This time around, we're going with a retro concert-poster look. The posters and t-shirts are in production, and will be available shortly. The posters are available in my Big Cartel shop, and the t-shirts will be sold exclusively at Kelly's. 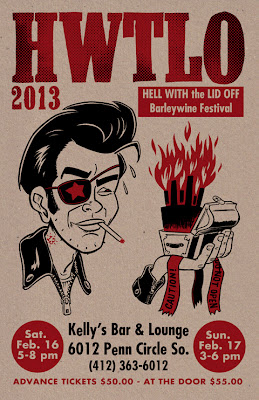 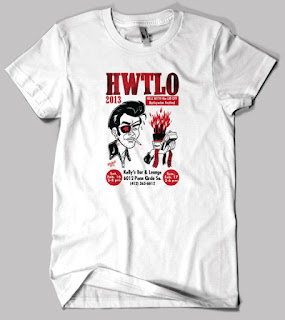 HWTLO is a singular event, offering samples of dozens of barleywines from around the country, along with a hearty bar-food buffet. It always sells out, and a designated driver is highly recommended.

Today's Bizarro takes us to the halls of academia for a lecture on particle physics. 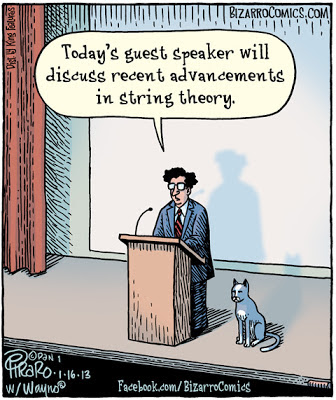 The general layout of my sketch made it to Dan Piraro's finished art, with, as usual, several improvements. Most obviously, Dan deleted the unnecessary audience members. This results in a less cluttered image, and draws the reader into the scene as a participant rather than an observer. You're looking at the stage (as opposed to looking at the audience looking at the stage).

Also, it made the cartoon easier to draw without those extra heads. 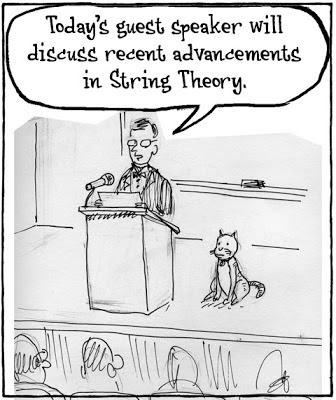 Readers may have noticed a fair number feline-themed gags coming from me lately. My wife and I have always had cats as pets, and naturally their behavior is in my consciousness. Over the past few months a small renovation project in our house has displaced them, and they've been sharing my studio space. Perhaps they've been whispering suggestions, or else I've been affected by their experiments with particle physics.

If you've got some time to kill, feel free to browse through my previous collaborations with young Master Bizarro.

Today's Bizarro is yet another example of that cartoon standby, the psychiatrist's office. 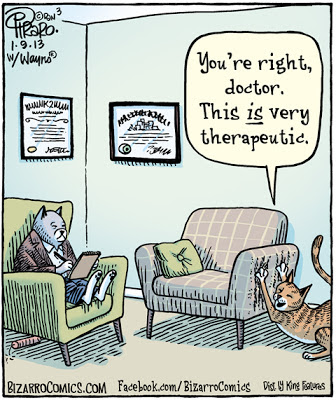 Bizarro's creator, Dan Piraro, made significant changes to the sketch. The staging is much improved. My aerial view looks cramped and unnatural, with the patient's chair almost on top of the doctor's feet. 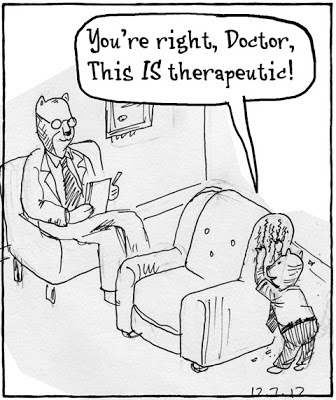 Dan also made both characters around the same size. After seeing the finished art, the cats in the sketch look like an adult doctor and a young patient, which was not my intent. Oh, and the expressive body language in the final art shows that the scratching cat is definitely very happy.

This gag was developed over the course of nearly a year before I submitted it for consideration. Below is the first (self-rejected) sketch, along with ideas for improving the gag. 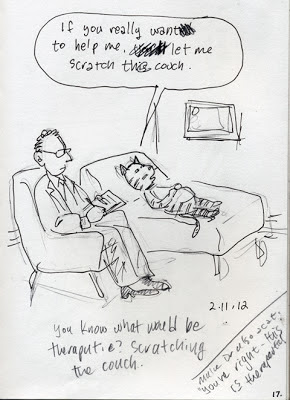 I held this one back because I usually don't show an animal speaking to a human, unless that's the point of the gag. The best Bizarro cartoons combine an absurd element with a familiar situation, and this sketch has very little grounding in reality, since animals don't literally speak to people. I felt that the reader might wonder why there's a talking cat, and what he's doing at a psychiatrist, which directs attention away from the idea of scratching furniture as a conscious practice for stress relief. It's a funny gag, but I thought it wasn't quite good enough.

The revised sketch works better, dropping the reader into a cat-populated world. I also prefer that the revised sketch shows (rather than talks about) the act of scratching. Still, the original has its New Yorker-ish charms.

One very interesting aspect of Dan's finished version is that the patient is naked! I didn't notice at first, but the doctor is clothed and the patient isn't wearing a thing, unless there's a collar that we can't see.

Coming up next week: another feline cartoon--one that nearly violates the  animal-human conversational rule.

Here's a brand new Bizarro comic to kick off the New Year. 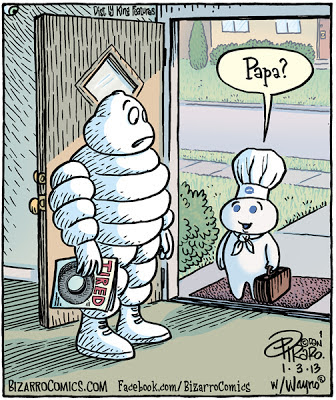 It's a bit of speculation regarding the parentage of a familiar advertising icon. I'm not sure who the mama might be.

At first glance, Dan Piraro's final art looks to be identical to my submission sketch, but as usual, he made subtle yet effective changes. The optimistic anticipation on the young doughboy's face contrasts nicely with Bib's look of shock and consternation.

He also added a little more space around the characters, which is a barely noticeable revision, but results in a more pleasing composition. 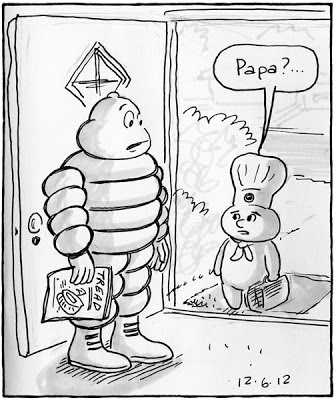 Finally, Dan changed the magazine name from Tread to Tired. I don't know why he made that particular edit. Perhaps he'll explain it on his blog, or maybe the Michelin man subscribes to both publications.

If you enjoyed this post, please wander through our earlier collaborations at your leisure, and take a peek in the upcoming weeks for two new feline-themed gags.