Will Work for Toys

I'll be participating in a comics festival at my local library next month. One of the organizers and I were kicking around options for an all-ages hands-on activity. We came up with the idea of providing an unfinished cartoon panel for attendees to complete. It will include a single character, no text, and plenty of free space, so participants can add their own character(s), scenery, dialog, or caption.

Later, I realized that this was a replication of a formative childhood experience. I (vaguely) recalled entering an art contest from the back of a cereal box, which included a bird character isolated in a plain white space. I'm fairly certain I completed the drawing by showing the bird dueling with some other character. One of them was using a hand saw instead of a sword. At the time, I was about 8 or 9 years old.


Although my cartoon art is just a dim memory, I still vividly recall coming home from school one afternoon to find a package waiting for me. Inside the box was a Mattel V-RROOM! Engine toy. This was a plastic contraption made to look like a motorcycle engine. You'd mount it to your bike, turn the key, and it made a loud motorcycle noise. That was all it did. I thought it was the greatest thing in the world.

A bit of Googling turned up a couple of images confirming at least parts of my recollection. The Post Cereal company ran a cartoon contest with several Mattel toys as the prizes, and apparently, I was one of a thousand fourth-prize winners. 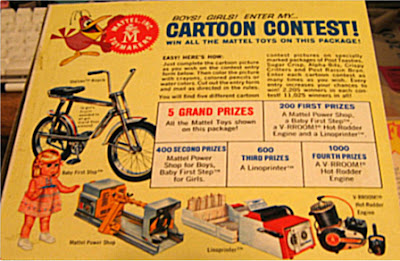 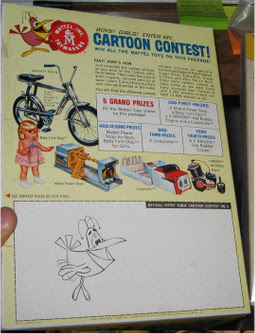 Initially, I thought the bird character might have been Toucan Sam (the mascot for Kellogg's Froot Loops) but it turns out to be Billie Bird, from Post's 30-minute ad posing as a cartoon show, "Linus the Lion-Hearted."
Billie was voiced by Carl Reiner, and the series boasted an impressive roster of writers, actors, and musicians. Voices were done by Jonathan Winters, Sheldon Leonard, Tom Poston, Stiller & Meara, Ruth Buzzi, and others. Some of the music was arranged by recording industry stalwart Johnny Mann.

I'd love to find a high resolution scan of the contest, so if you're a cereal box collector and you have one of these boxes, please get in touch.