Happy Saturday, Jazz Pickles. I have no witty introduction prepared, so let's jump right in with a look back at this week's shenanigans. 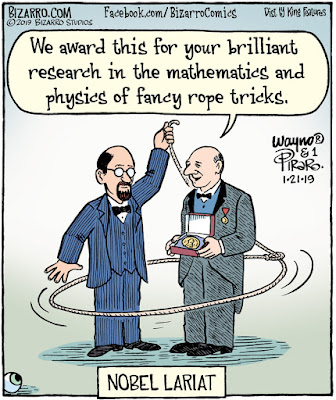 We eased into the week with a bit of silliness utilizing a pun that I had not seen before. There's no deep meaning in this one, although one reader mentioned an odd coincidence, writing, "Phillip Sharp and Richard Roberts actually won a Nobel prize for discovering a lariat, the structure that forms in splicing!"

I located many references to this scientific research, without finding any that specifically used the word "lariat," but the comment still makes me happy. 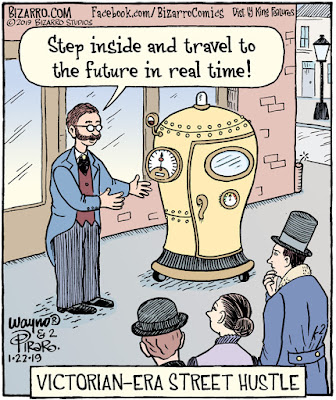 This enterprising gent is engaged in old school crowd funding, via a clever precursor to "I know where you got your shoes" scam. 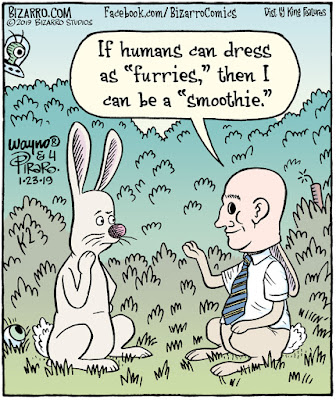 As I drew this gag, I realized that an animal wearing a human mask can be quite disturbing. 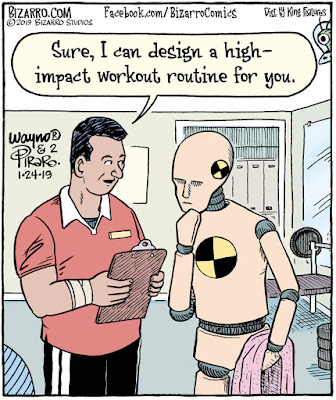 Our protagonist was later kicked out of the health club for continuing to run headfirst into the climbing wall. 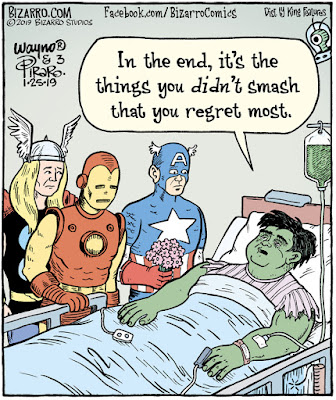 As always, we put our favorite gag of the week in the Friday slot. We enjoy making fun of superhero characters, and portraying the Hulk as philosophical (and articulate) was particularly enjoyable.

Animation historian Jerry Beck asked if my Hulk drawing was really a caricature of political dirtbag Steve Bannon. I decide to do a little re-coloring experiment to see if there was any resemblance. 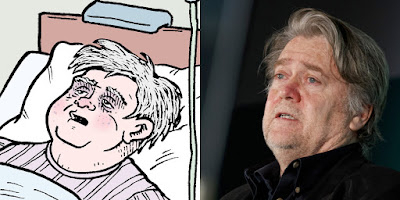 The Hulk is much more attractive than Bannon, wouldn't you say? 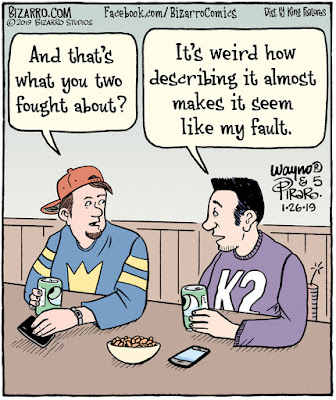 Saturday's gag fits squarely into one of our recurring themes: human miscommunication, and the ways we manage to delude ourselves. When I do a cartoon like this one, I'm pointing a finger at myself as much as at anyone else.

For even more insight, analysis, and navel-gazing, direct your browsing apparatus to Dan Piraro's blog, where you can also check out his latest widescreen Sunday page.

Nobody expects high art from a cartoon theme song, but this title music from Marvel's 1966 Hulk TV series contains some of the most dubious rhymes ever recorded:

Wreckin’ the town
With the power of a bull
Ain’t no monster clown
Who is as lovable
As ever-lovin’ Hulk! HULK! HULK!

It's Saturday, which means we're posting our weekly roundup of Bizarro cartoons. 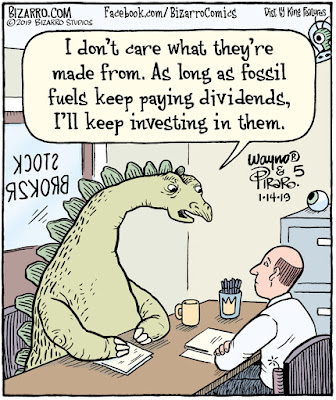 This investor's callous indifference toward its own kind is based on a faulty premise, as fossil fuels are mostly the product of decomposed plants and very small organisms. Still, based on the tenacity of the misconception, I think the joke works. 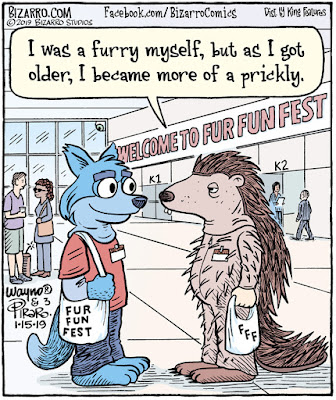 Tuesday's gag pokes fun at a fandom subculture, but does so with an undercurrent of affection and gratitude. Since 2006, my hometown has hosted Anthrocon, an annual gathering of furries. This unique nonprofit organization has contributed to our local economy, and endeared themselves to the city. In addition to their conference, meetings, and other activities, each year Anthrocon raises money for a different local nonprofit or charity dedicated to helping animals. They're exemplary visitors and always welcomed as honorary Pittsburgh citizens. Plus, they add plenty of color to our downtown area when they visit. 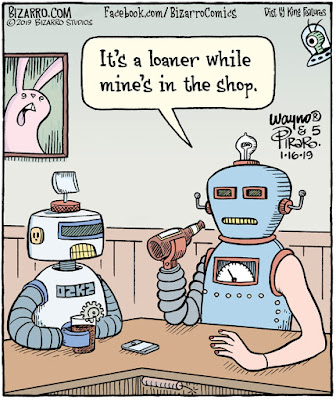 The wily dealer likes to give out a loaner that guarantees the customer will return for their original parts. This one was a lot of fun to draw, and it took some extra effort to get the mannequin arm just right. 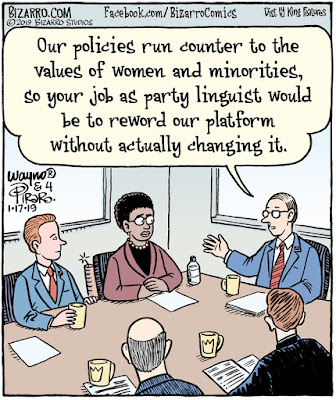 This would almost be plausible as a documentary comic if the real-life counterparts to these characters cared at all about even appearing to be inclusive. 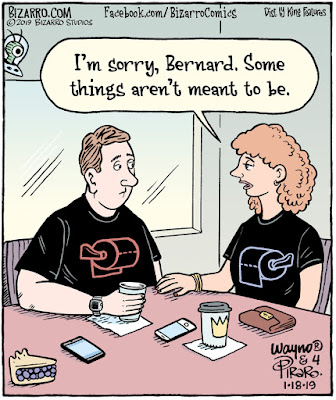 The debate rages on. Apparently many people have strong feelings about which way to install a roll of toilet paper. From a writer's standpoint, I think the first line ("I'm sorry, Bernard.) helps this one a lot, establishing a deadpan, conversational tone. 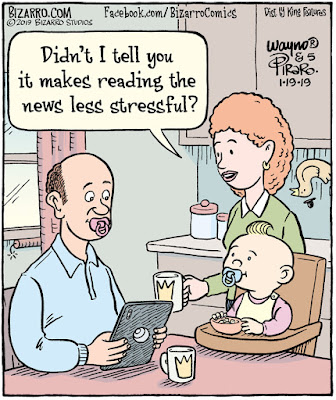 Of course Dad's binky has been dipped in honey bourbon.

Please cruise on over to Dan Piraro's blog for additional opinion, commentary, and pot-stirring.

This week's musical choice was inspired by the gags from Monday (band name) and Saturday (song title).

Hey, Your Faithful Blogger has to find ways to amuse himself week after week.
No comments:

It's been a busy a week at Bizarro Studios North. In addition to our normal daily routine, we've been reviewing last year's output to assemble an entry package for the National Cartoonists Society's annual "Silver Reuben" awards, which will be presented in May at the group's annual meeting.

We'll be entering the newspaper panels division. Wish us luck! We don't expect to win an award, but look forward to seeing many of our esteemed colleagues.

Now, on to the current batch of ink-splatters... 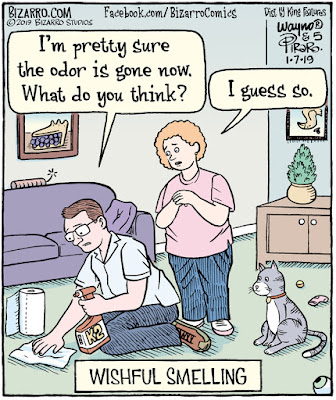 Sometimes, it's difficult to trust your own senses. This might also have been titled "magical smelling," but I chose this caption since the phrase "wishful thinking" is much more common. 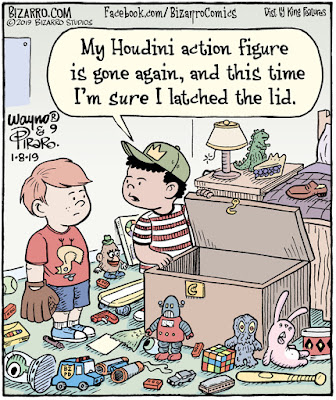 When writing this gag, I failed to consider how long it would take to draw and color the toys spread throughout the image, but I did give myself a little reward to keep going. Among the scattered items, I included Hedorah, aka the Smog Monster, my favorite Toho Studios creature (after Godzilla, of course). 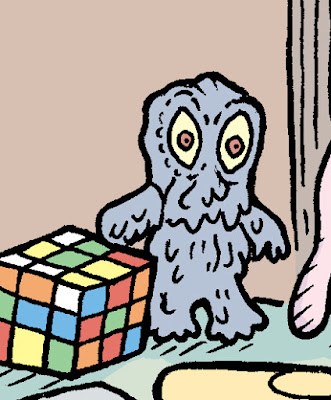 Wikipedia says the character was named for Hedoro (へどろ), the Japanese word for sludge, slime, vomit or chemical ooze. What's not to love?

Hedorah (under the nickname Smoggo) has made multiple appearances in the comics and fine art of the ever-amazing Gary Panter. 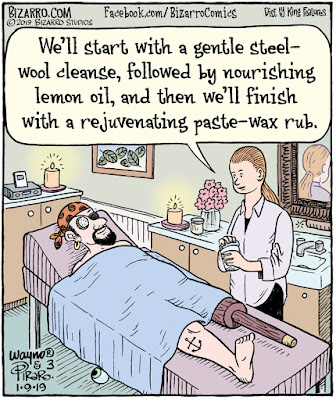 The spa gave this client a discount, since his treatment only required one cucumber slice. 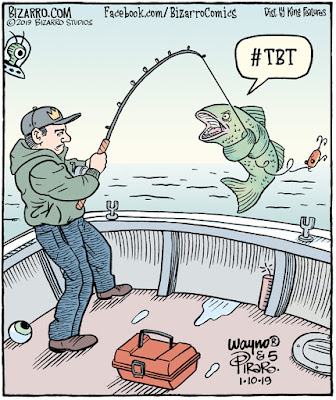 I occasionally get comments that some of my cartoons reference "old things," and that (other) people won't get the joke. I reject that argument, as Bizarro's readers are well-educated and knowledgeable. However, Thursday's gag is a concession to contemporary parlance.

By the way, can you believe that stupid fish actually said the word "hashtag?" 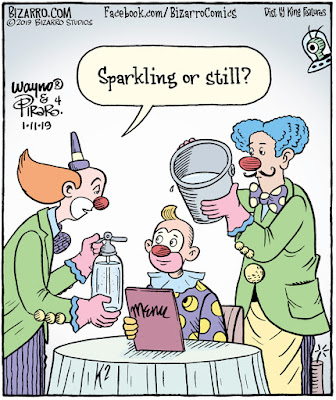 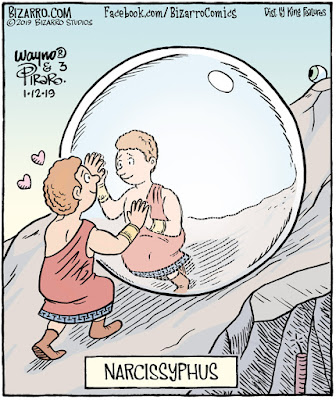 We ended the week with a Greek mythology mashup. This portmanteau name might be applicable to a current world leader, since Narcissus was in love with himself, and Sisyphus was a cruel tyrant. Both mythological figures got their comeuppance, which offers us some hope.

Thanks as always for reading the comic, and for following up with the blog. Dan Piraro posts his own weekly roundup over at Bizarro.com, where you can view his latest widescreen Sunday page.

You also owe it to yourself to check DiegoPiraro.com, where Dan exhibits and sells his fine art, now that he's semi-retired from cartooning. His watercolors, oils, and mixed media drawings are surreal and beautiful, showing the strong influence of his current home in Mexico.

This week's musical number is "Save the Earth," the theme from the English language release of Godzilla vs the Smog Monster, performed by Adryan Russ, who also wrote the lyrics. It's still timely.

A Headful of Ideas

Last week, we closed out my first full year as the daily Bizarro cartoonist, and stumbled right into Year Two. The staff and management at Bizarro Studios North are still recovering from the wild celebration, and we're currently testing multiple hangover remedies. 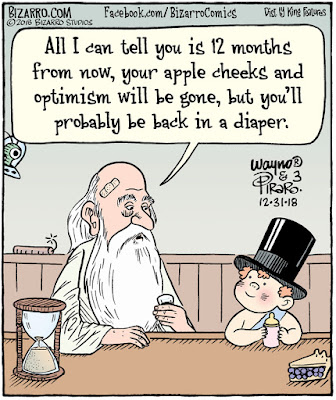 Our New Year's Eve offering shows the outgoing mascot offering words of wisdom to the new guy. I once had a summer job painting houses, and never forgot the advice I received from an experienced fellow everyone called "Uncle Jimmy," which seems more than a little creepy in retrospect. As we lingered over Styrofoam cups of lousy diner coffee, Uncle Jimmy leaned my way and said, "Never let anybody put a tool in your hand, kid." I heard his voice when I drew this cartoon. 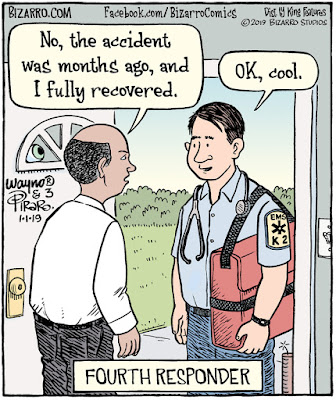 This guy's motto is "Hey, not everybody can be first." 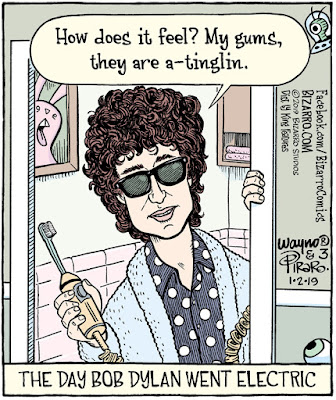 This simple gag required a fair amount of photo research, not only for mid-1960s photos of Dylan, but also for electric toothbrushes of the era. During that period, the future Nobel Laureate often wore pajama tops and a terrycloth robe in public. 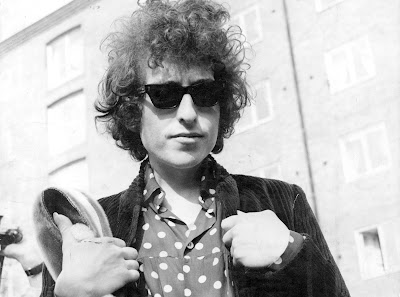 You knew we couldn't get through the first week of the year without a pirate gag, right? 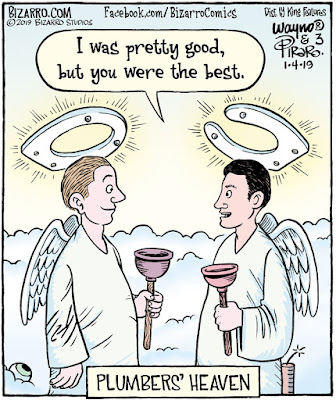 There's no explaining the workings of a cartoonist's brain, but this indication of rank made perfect sense to me. 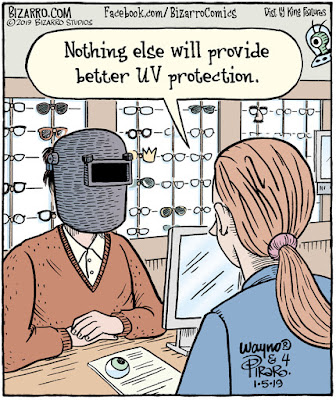 A recent visit to the optician inspired Saturday's gag. I'd love to see a welder's mask on the wall along with the Ray-Bans.

By the way, we felt we had no choice but to include the eyeball secret symbol here.

Come back next week for another peek behind the newsprint. Also, check out Bizarro CEO (Chief Eyeball Officer) Dan Piraro's blog for his commentary and the latest Bizarro Sunday page.

The songs of Bob Dylan, the subject of Wednesday's cartoon, can be humorous, surreal, deep, and sometimes just plain weird. He's truly a singular performer (take that however you care to) and a prolific writer. One website that attempts to track recordings of Dylan's compositions lists over 105,000 known cover versions.

For this week's post, we're offering two bonus tracks, both covers of songs written by the Bard of Duluth.

First up is "Subterranean Homesick Blues," by the fictional band Ken Bishop's Nice Twelve (featuring Jools Holland and Chris Difford of Squeeze, and Police drummer Stewart Copeland). This delightful, upbeat version showcases Dylan's inventive, dense wordplay, in a tune that always reminds me of Chuck Berry's "Too Much Monkey Business."

This week's B-side (maybe make that D-side) is an utterly horrible rendition, from an entire album of cringe-inducing Dylan songs interpreted by Sebastian Cabot, the character actor who was best known for portraying Mr. French on the saccharine sitcom Family Affair. The record was occasionally featured on WFMU's gone but not forgotten Incorrect Music Show.

Yes, I actually own a copy of this atrocity, and no, I've never played it all the way through. 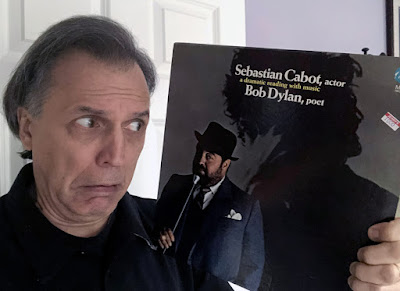