Denny was a prolific comics writer, who collaborated with dozens and dozens of alternative comics artists over a long career. He usually wrote about events from his own life, and he had a seemingly endless backlog of wild and memorable tales of sex, drugs, rock & roll, alcohol, violence, pranks, and general mayhem.

Through my good friend J.R. Williams, I met Denny at one of my first San Diego Comics Conventions, and saw him there every year from the late 80s through the early 2000s. Denny was a sweet, generous, and funny guy, but based on his work, I kept thinking "This can't be Denny Eichhorn. He's too calm and nice!"Denny and J.R. collaborated on several hilarious stories about the notorious outsider musician Larry "Wild Man" Fischer, who was a regular at Comic-Con back in the old days. One year in particular, Wildman was upset about one of these comics. I can't recall if he was angry about the way he was portrayed, or that he wasn't receiving payment for being the subject of a cartoon. Maybe a little of both.

I shared a booth with several other cartoonists, and during the Con, an agitated Wild Man leaned across our table, and snarled, "Tell Denny Eichhorn I'm looking for him!"
Denny returned to the convention later that day, after an overnight visit to Tijuana. I told him that Wild Man was after him, and looking for trouble. Denny just smiled, and pulled a long switchblade out of his back pocket. As he flicked it open he said, "Let me tell you something about Wild Man Fischer. Wild Man Fischer is AFRAID OF KNIVES!"I smiled and thought, "Now, that's Denny Eichhorn!"

Denny was a true larger than life character, and a great friend to many fellow cartoonists. He died at age 70, and left us with much more than a lifetime's worth of stories.

I illustrated one of Denny's stories, which appeared in Real Stuff #16, in December 1993. 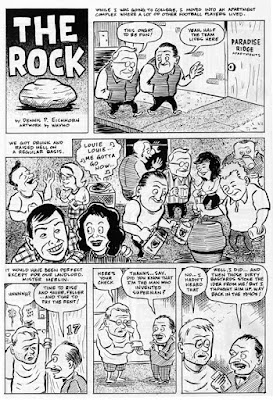 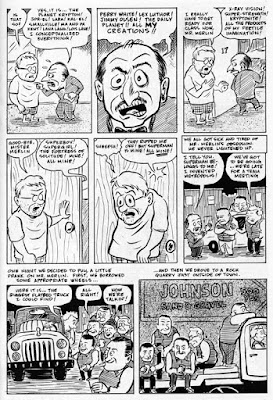 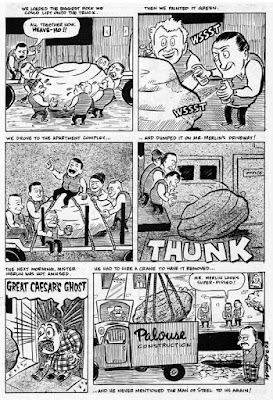