A Chip Off the Old Brimstone 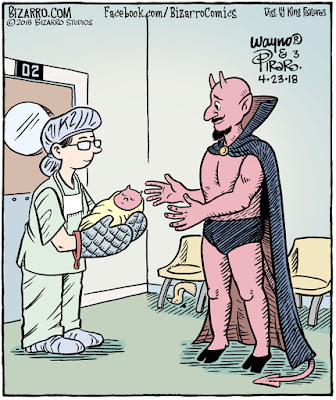 Monday's wordless gag may have confused readers who get their daily Bizarro fix from newspapers that run the strip version, particularly those printing their comics at the scale of a fortune cookie message. I had trouble seeing it, and I already knew the gag.

It's an odd, transitional era for daily comics. Online readers can see details in the art, and have the option to click to an enlarged image. Newspapers, on the other hand, are running comics at ever-smaller sizes, and the printing process introduces "funk" when color images are converted to halftone dots. Art with fine detail and saturated can start to look muddy, even when magnified. 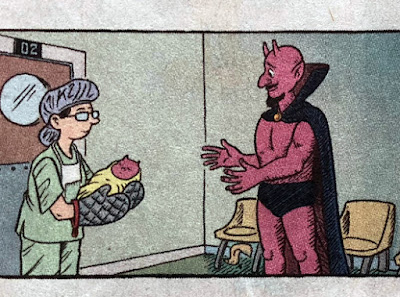 We keep that in mind, and try to avoid making any important parts of the art too small to decipher on newsprint. It's a balancing act. Perhaps we should start drawing with broad point Sharpies. 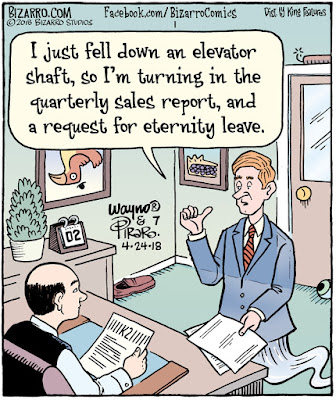 Think twice before saying you'd do anything to leave your job. One has to admire this employee's commitment and follow-through. He's hoping for a positive reference when his new employer checks up on his history. 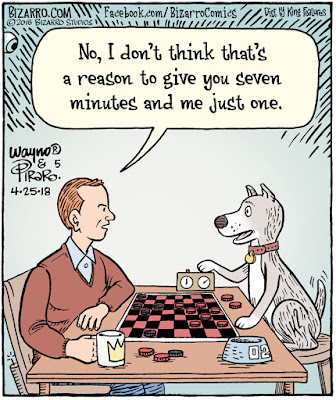 Rex is trying to exploit the common belief about dog years to help with his checkers game. The temporal advantage is probably unnecessary, since he'd just won four consecutive Scrabble games. 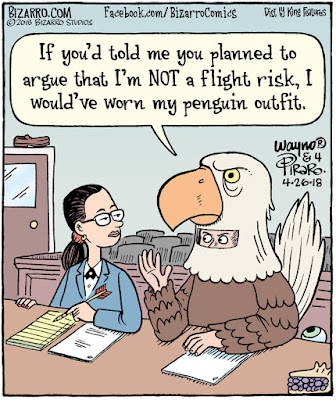 Thursday's comic serves as a gentle reminder to check in with your attorney when deciding which giant animal costume to wear at your trial. 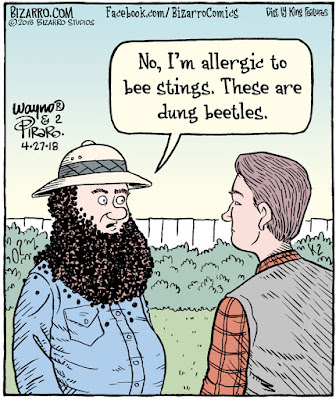 My first sketch of this one referred to ladybugs, but we decided that if the beard of insects was red, it would telegraph the gag, and almost make the text redundant. Also, I was too lazy to draw that many ladybugs. This is a simple gag referring to a common phrase. Our favorite part is the elephant's apprehensive expression. The detail above shows a little reward I gave myself. This was the 100th comic I've drawn since I started working on the 2018 dailies. As I complete each inked original, I write a sequence number in the corner of the art board. 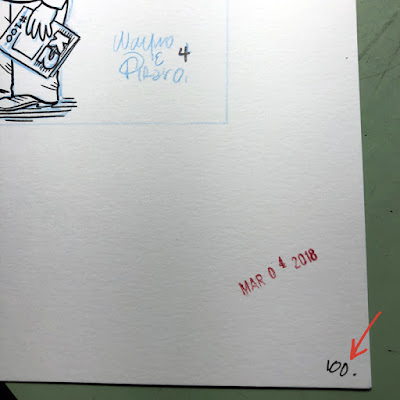 I felt pretty good about this milestone until I realized I had 212 more to go this year.

Last week, we jumped into a new digital stream. There's now a Bizarro channel on Apple News, for those readers with devices on the iOS platform. It's an excellent way to view the comics. The image on your iPhone is probably bigger than the one in your local newspaper.

Be sure to visit Dan Piraro's blog to check his comments on this week's gags, see the latest gorgeous Sunday panel, and shop for Bizarro swag.

A Slap in the Facebook, or, There's a Zuckerberg Every Minute

Welcome to the latest update from Bizarro Studios North. Here's a look back at this week's cartoon offerings. 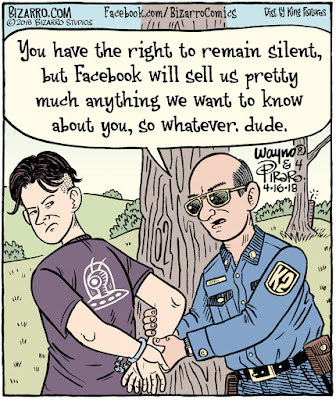 We started the week with a timely gag, commenting on recent revelations about our online privacy, or lack thereof. Maybe "confirmation" is a more apt description than "revelation," since we've all at least noticed targeted ads on our social media pages. Some people even claim that ads pop up for things they've discussed, but didn't search for online, believing that apps on their phones are listening in on offline conversations.

Quite a few people shared this one, so we can all probably expect to hear from bail bond agencies offering their services. 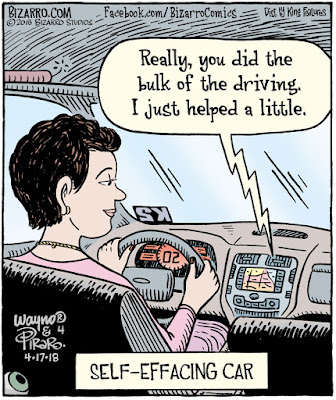 Tuesday's cartoon includes a ride through the Uncanny Valley. That term usually describes humanoid objects that appear almost, but not quite like actual human beings, but it can also apply to artificial voices. I find talking apps that are programmed to sound conversational or make jokes to be particularly disturbing.

Speaking of self-driving cars and odd near-resemblances, Google named their self-driving car division "Waymo," which has resulted in occasional confusion as shown below.
These are actual, unaltered screen captures. We once even received a phone call from some news organization wanting to write about this particular technology. I declined to comment. 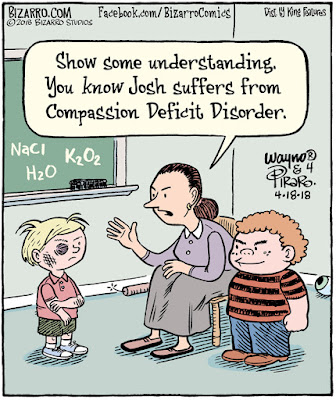 After completing this cartoon, I was surprised to find that the term Compassion Deficit Disorder is not new, and was coined by Diane E. Levin, professor of early childhood education at Wheelock College in Boston, to describe children who act without empathy or regard for others. There's probably something to it, at least as applied to kids who have been influenced to act that way. Unfortunately, "CDD" seems to have become a dominant characteristic of far too many adults, particularly among those in seats of power. 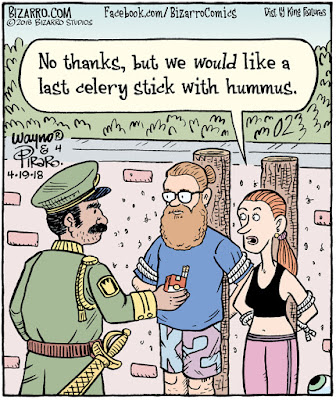 Here we present a Bizarro twist on a familiar cartoon trope. We're not sure how Yoga Mom & Dad ended up in front of a firing squad, but you must admire their commitment to a healthy lifestyle. 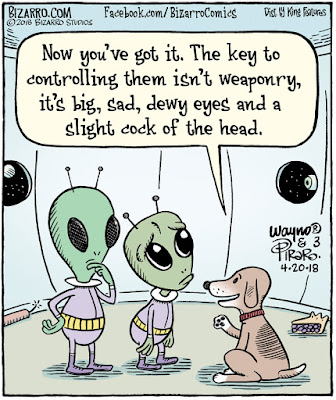 Friday's gag is my favorite of the week. When laying out a weekly sequence, I usually put the one I feel is strongest in the Friday slot. Dan Piraro and I are both animal lovers, but we also understand that our dogs and cats are playing us. This one was a true collaboration. My original sketch included the line about big, sad, dewy eyes. Dan added the "slight cock of the head," which really nailed it. 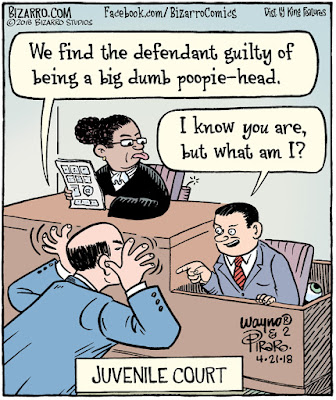 My first caption for this one was was "Infantile Court." But, we decided to go with the actual phrase "Juvenile Court." By current standards, the behavior depicted in this gag is positively statesmanlike.

Be sure to go to Dan's blog for his thoughts on this batch of Bizarritude, his always-spectacular Sunday comic, and a link to the Bizarro Shop, where you can purchase beautiful enamel pins, t-shirts, mugs and other Jazz Pickle Essentials.

Look for me on Facebook, if I haven't been removed by their goon squad.

Addendum: About That Title 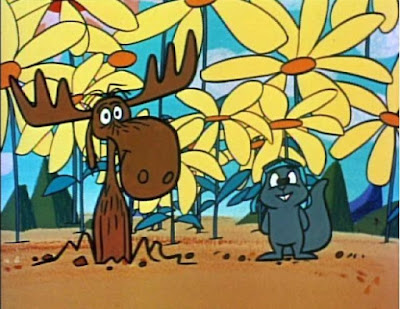 The title for this week's post pays tribute to one of my favorite animated cartoons, Jay Ward's The Adventures of Rocky and Bullwinkle. Each storyline ran over multiple episodes, ending with a cliffhanger situation. The series' announcer, William Conrad, would then tee up the next segment with a pair of titles, usually involving obscure pop culture references and terrible puns. A typical example would be Conrad's emphatic reminder to "Tune in again next time, for The Snowman Cometh, or, An Icicle Built for Two!"

Old MacDonald Had Some Issues

Happy Saturday, Jazz Pickles. It's time for another recap of the week's cartoons from the offices of Bizarro Studios North, in Hollywood Gardens, Pennsylvania. 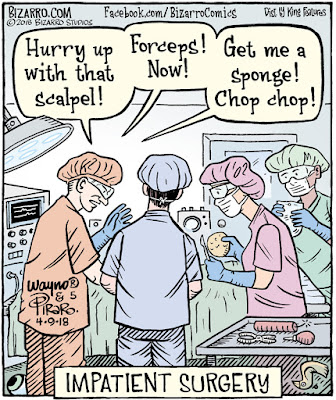 The week kicked off with a bit of wordplay, based on a mishearing of the common phrase "inpatient surgery." The lead physician here was in such a hurry, he didn't bother to wear his face mask. Before going to medical school, he worked with a pit crew at a raceway. 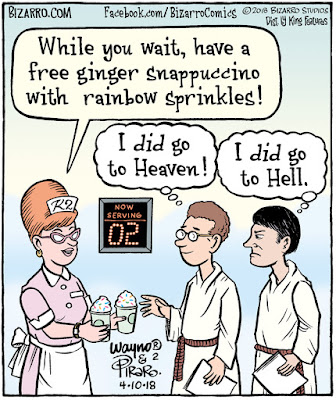 Tuesday's cartoon is one of those "there's two kinds of people in the world" observations, and it takes place in an imagined anteroom for the recently departed. Any resemblance between the unhappy new arrival and a particular syndicated cartoonist is purely coincidental. 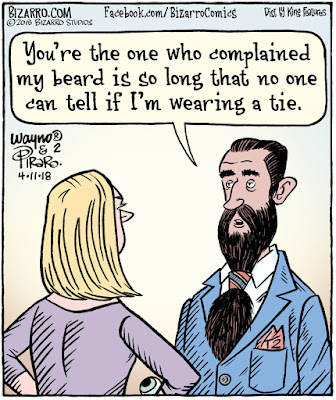 This one is a subtle marketing survey in disguise. Right now we're analyzing readers' comments, as we plan our initial sales offering of official Bizarro beard-ribbons. They're perfect for all formal occasions. 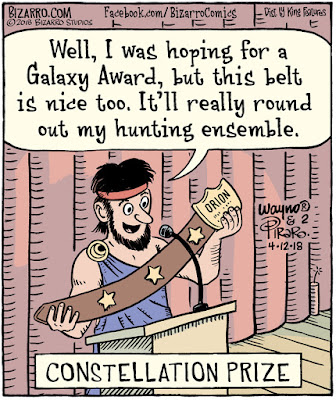 Orion is certainly a good sport, isn't he? While doing research for this gag (to confirm the correct number of stars) I learned that Orion's Belt is an example of an asterism. That's an astronomy term describing a pattern or group of stars having a popular name, but not large enough to be considered a constellation. As of this writing, I've been unable to find a definition of the minimum number of stars to qualify as a constellation, but I'd bet some Bizarro readers know the answer. 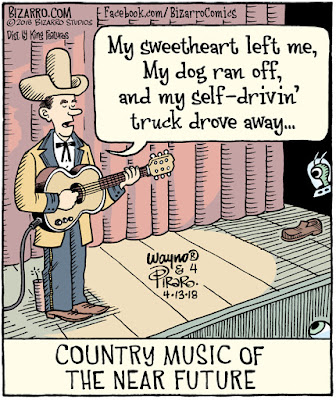 The day after the Galaxy Awards, country singer Ramblin' Slim Bodine gave a concert on the very same stage. Although his lyrics refer to modern concerns, Slim considers himself an old-school performer, and has been known to rant against "mirrored-sunglass-wearin', headset-singin' frat-bro poseurs." Ticket sales for the show were weak, and Slim had to vacuum the aisles after the show to cover his advance payment. 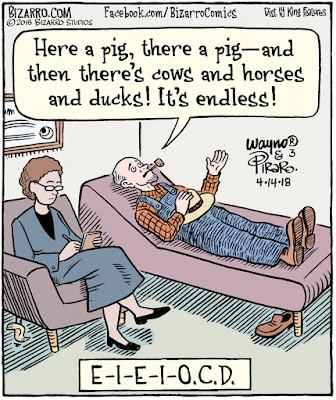 Cartoonists often use humor to explore subjects that may not be inherently funny. In the real world, obsessive and/or compulsive behaviors can range from a mild inconvenience to major obstacles to life, work, and relationships. At some time or other, we all exhibit some of those tendencies.

Laughing at life's tragedies is an ancient human tradition that can have psychological benefits. Many situations routinely appearing in cartoons would be unpleasant (at best) if experienced in real life: being stranded on an island, cracking one's head on the ground after trying to kick a football, or meeting the Grim Reaper.

The cartoon is not meant to minimize anyone's difficulties, but rather to acknowledge our common struggles as human beings, and, hopefully, to remind us that sometimes a laugh helps to mitigate their power over us.

Also, hearing that song all the way through could send anyone to their therapist.

Well, that's more than enough amateur psychology for an ink-jockey to put in one blog post, wouldn't you say?

Until next Saturday, please keep reading and commenting, be good to yourself and your friends, and be sure to read Dan Piraro's weekly blog for his thoughts on the week's gags, and to see his glorious Sunday comic.

Looking back over the week's Bizarro comics, it strikes me that half of them show characters in perilous (perhaps life-threatening) situations. Let's call them cautionary tales, and not psychoanalyze the cartoonist, shall we? 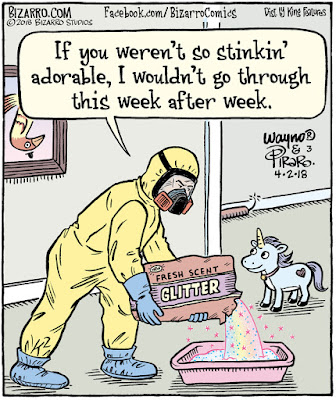 Although unicorns can be trained to use a box, even small quantities of airborne glitter present a serious respiratory hazard, and are nearly impossible to remove from clothing, hair, and skin. Thinking through the premise of this cartoon gave me a renewed appreciation for my feline housemates. 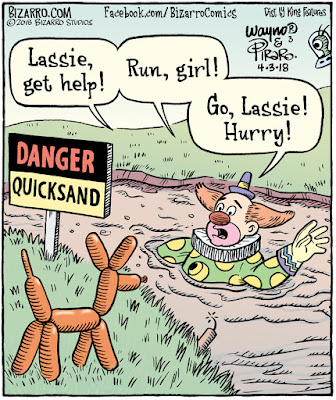 Some pets are highly trainable, and can learn to obey a variety of spoken commands. Others, however, are less responsive. 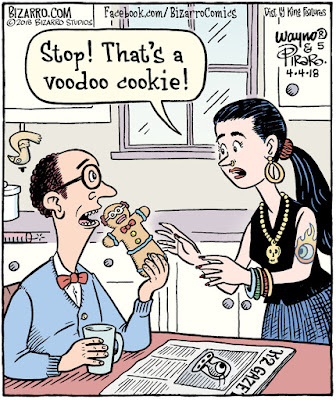 The unfortunate character about to eat his own baked effigy bears an unintended resemblance to performer and writer Peter Bergman (1939-2012). Bergman was a member of the revolutionary comedy group, the Firesign Theatre, who helped to twist the teenage brain of this cartoonist, and whose influence is present, at some level, in all of my work.
This gag started as an unconscious doodle of a voodoo doll, which reminded me of a gingerbread boy, and led to a drawing of a cookie stuck with a pin. 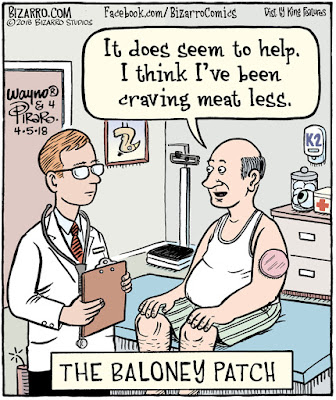 Bizarro CEO (Chief Eyeball Officer) Dan Piraro and I exchanged several emails discussing which spelling (bologna or baloney) to use in this caption. We finally decided to go with the Americanized spelling, since it also means "nonsense," and there's no question about the pronunciation. 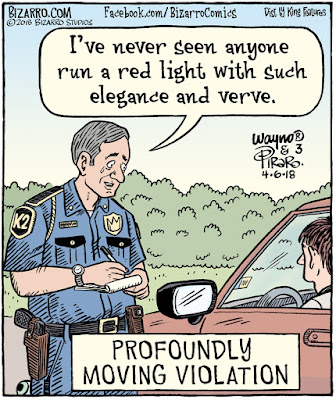 The officer in this panel added a note to the traffic ticket reading, "I laughed, I cried, I added three points onto your driving record." 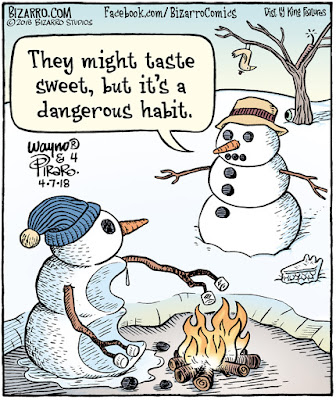 Our final cartoon of the week reminds us of the sad truth that some harmful behaviors are also highly addictive.

The poor creature in the foreground wondered aloud, "If we weren't meant to eat toasted marshmallows, why do we have arms that are such perfect cooking twigs?"

Thanks for following Bizarro for another week. Be sure to read Dan's weekly blog for his take on the week's comics, and to see his latest Sunday panel. Also, Dan's been posting his recent paintings on his Instagram page, and they're wonderfully surreal.