The Federales rejected our original design for East End Brewing Company's Coffee Porter. They decoded our "eye opener" rebus, and decided that it could be construed as a health claim.

They agreed to approve the design if we separated the images and released the beer using two different labels: 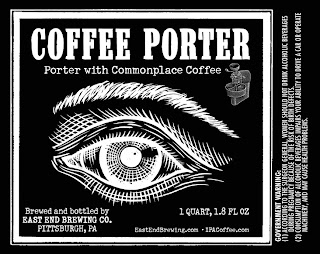 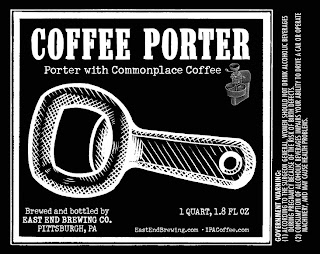 Now, East End completists will have to buy two bottles, and display them side-by-side.

Buying more than one bottle of any of East End's brews is always a good idea.

I've had a couple of fun local gigs this month involving some of my favorite liquid refreshments.

First up is a t-shirt design for Espresso a Mano, an artisanal coffee shop where I have been known to have a cup or three. Keeping things very local, the screen printing was done by our good buddy Michael "Zombo" Devine, a true Renaissance Man.

Here's the molto semplice design, followed by a nice stack of shirts, ready for purchase: 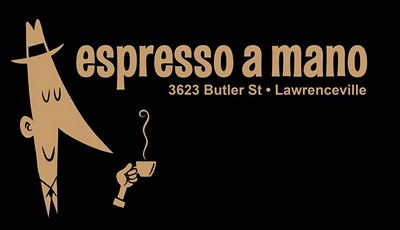 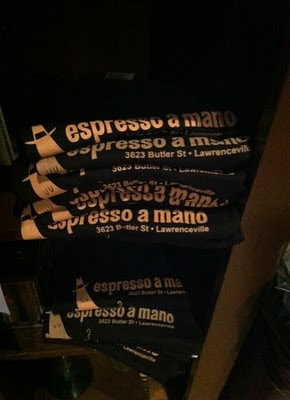 EaM's proprietor, Matt Gebis, is practically giving these away for $14 a pop.

I'm also working (once again) with my good neighbor, the incredibly busy brewmaster Scott Smith of East End Brewing. One of Scott's newest brews manages to combine beer and coffee. It's not unlike those carrot-parsley-celery combos that provide the benefits of multiple nutritional drinks in one satisfying concoction. The new Coffee Porter uses coffee from Indiana Pennsylvania's Commonplace Coffeehouse & Roastery.

We haven't received final approval from the Feds yet, but the latest changes they asked for were very minor, so we feel safe giving a preview: 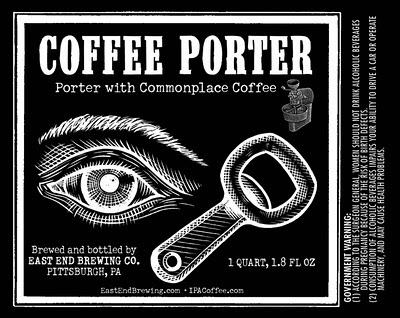 The name Scott originally submitted didn't meet with the government's approval -- they feared it might be interpreted as a health claim -- but it's very cleverly shown in the rebus illustration on the label. Sneaky, aren't we?

East End will soon have new improved growler suits available, to keep your jug o' suds at drinking temperature. The new version of this insulated valise, which we're still fussing over, will feature a lush velour-like (or at least velour-looking) interior.

Bringing things full circle, I've learned that Commonplace is one of Espresso a Mano's suppliers, so it turns out that this entire post is about drinking, drawing, and designing in Western PA.


:::
UPDATE 11/19/10
Well, the bureaucrat took a second look at the Coffee Porter label and bounced it. The official word is:

"Upon second review, the symbols state "EYE OPENER". This implies a physical effect that the copffee (caffeine) will have on the consumer."

Interestingly, it took a second review to decode the illustrations! They were apparently so excited, they added a "p" to the word "coffee."

Back to the (digital) drawing board.

Maybe we can make a t-shirt with just the symbols on it.

Today's Bizarro is the latest in what's becoming a satisfyingly large pile of collaborations between Dan Piraro and yours truly. As with the last one, I'll start with my initial sketch, followed by a trail of email messages wherein we deconstructed and rebuilt the gag, hammering it into something usable.

The idea for this joke came from an email from my friend and neighbor Gwyn Cready, an award-winning writer of romance novels involving time travel and numerous steamy interludes. She recently announced a "blaunch" party for the publication of her latest book.

I immediately latched onto the term "blaunch" and recognized its meaning to be "web launch," in the same way that the word "blog" is a blending of the words "web" and "log."

Following that template, I came up with this rough, attempting to point out the  artificiality of much online existence: 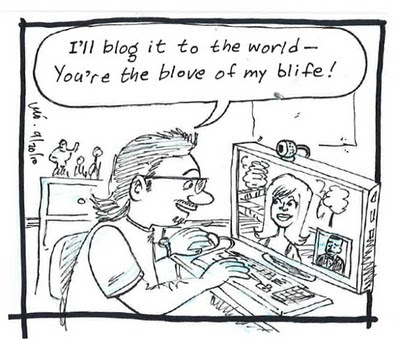 I quite liked the rhythm of this, with the familiar example (blog) followed by two similarly-constructed coinages. The surprise of these odd-sounding words coupled with the recognition of their derivation was the intended source of the laugh, in addition to the commentary on the unreality of the web-based interactions (although that's an easy target.)

Initially, Dan rejected the gag, but I persisted in trying to make something of it. Our email dialog, additional revisions, and the final version follow:

Piraro: This one is kind of fun but I don't think I'll use it. It would work better if "blog" was actually a word without the b, like the other two words are. Know what I mean?

Wayno: Ah, but it is a word on its own! Blog is a shortened form of Web log. That's why I used "L" words in the rest of the text (web-love, web-life). I try to fact-check all of my gags! Of course, it's your call.

P: You're right about the blog thing, but it doesn't have the right ring to it somehow. I don't know, it's a judgment call.

W: Yeah, I agree. "Blog" has become a word unto itself, and its origin is already so obscure as to be pretty much irrelevant. Too bad!

Then, a day later, I submitted a revised version, with the email subject line: Take 2, or Beating a Dead Emoticon

W: I'm taking a shot at salvaging the cartoon with the dude at the computer declaring his love. The point of my obscure wordplay in the original version was to emphasize the unreality of the situation ("web-love of my web-life"). This version piles on the cyber/virtual/simulated synonyms. 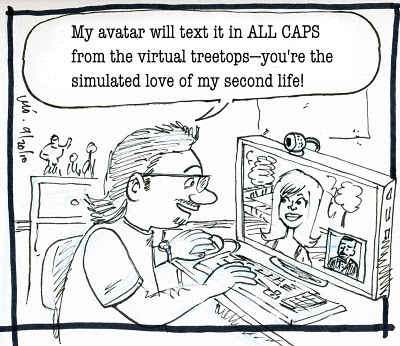 It's not clear in the rough, but there's an avatar for the guy in the corner of the screen that's meant to be a suave tuxedo-clad smoothie, and the girl on the screen is meant to look artificial, with a bit of scenery behind her in that awkward, forced "Farmville" perspective.

It's probably too much to cram into a tiny space, and maybe not all that effective, but I'm giving it that old college try! My never-say-die approach worked with the Atheist Anagram Society! If you decide to pass on it, then I'll just consider it to have been a good mental workout.

P: I like this angle, too, but I'm wondering if it could be simpler. I don't know anything about "Farmville" except that it is a virtual world of some kind and lots of people are doing it. Could it be that a guy in a bar is saying to a hot babe, "Thanks for the invitation, but I'm dating someone in Farmville"?  Seems a simpler, funny way to poke fun at virtual lives. Let me know if you think this works or if you can think of a similar way to do this joke.

W: Oh yeah! I like it. A guy at a bar talking to a hot babe makes it even clearer that he's passing up the real for the virtual. And you're right, a simpler approach has more impact.

Since we're fussing over this endlessly, I suggest editing one two-letter word, changing "in" to "on." So it will now read: "Thanks for the offer, but I'm dating someone on Farmville."

I think "on Farmville" emphasizes that it's virtual, whereas "in Farmville" sounds like it could possibly be a real place.

This has to be the longest route ever taken to get to a punchline, but I really enjoy the back-and-forth. Plus, recounting all of the iterations will make for an interesting blog post!

P: Okay, it's a go. But the last question I have is, are there people on Farmville? I'm assuming so, but I don't want a bunch of emails correcting my logic.


W: Ha! Good question. Yes, there are people. And they look ridiculous! 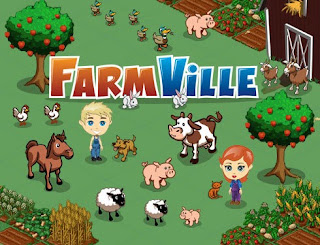 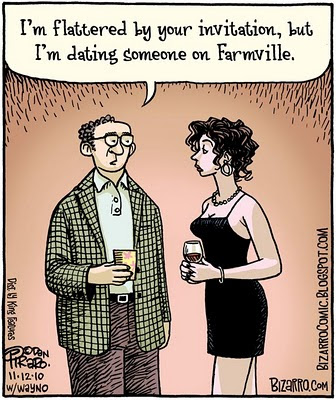 Another tortuous journey from concept to execution, with you readers dragged along for the ride. I'm very pleased with the published piece, which is effective and stripped down to the essentials. As I study Dan's work, I'm often impressed by the deadpan, matter-of-fact expressions and body language of the comic's cast. An outrageous statement can become a lot funnier when the character delivering it is completely blasé.

As always, our earlier joint efforts can be found by searching for the Bizarro label.

Watch this space for more.


PS: I apologize for the inconsistent paragraph spacing in this post. Blogger can be uncooperative, and the more you try to make adjustments to compensate for its idiosyncratic behavior, the worse it becomes.