This sextet of Bizarro cartoons includes a few music-related gags, possibly because music occupies such a large section of my personal phrenology map. Whatever the reason, let's run down the chart, and see if any of these have a beat you can dance to. 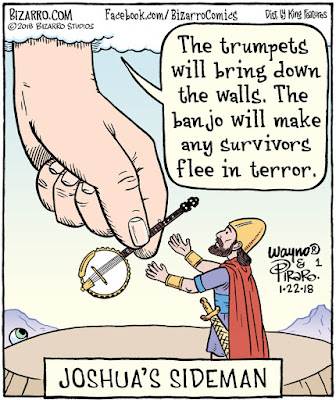 Several readers suggested that Monday's cartoon could instead have featured accordion, bagpipes, tuba, etc., but banjo players are known to have a healthy, self-deprecating sense of humor, and love to tell jokes about their chosen axe, so that's the direction we took with this gag. Before someone else points it out, the irony of a ukulele-strumming cartoonist poking fun at the banjo is not lost on me.

As a side note, if you're ever in Pittsburgh on a Wednesday, I highly (and non-ironically) recommend checking out the weekly open rehearsal of the Pittsburgh Banjo Club. 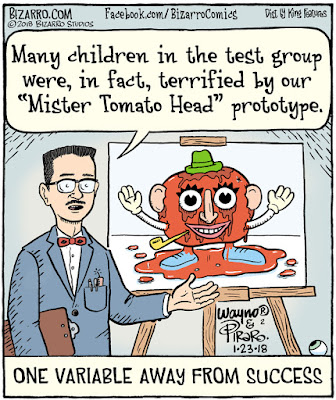 Here we reveal a little-known hiccup in the development of a classic toy. This panel also features the tiniest stick of dynamite to appear in Bizarro to date. 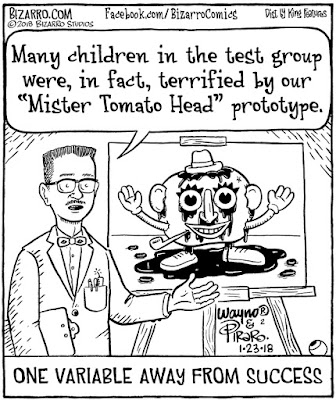 It turned out to be even more disturbing in black & white. 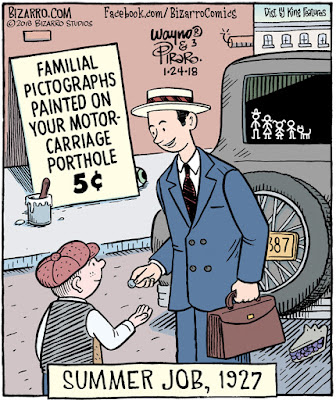 Those rear-window stick figure things have been around longer than most people realize, but there's no craftsmanship involved these days. For two bits, the kid would do Happy Hooligan whizzing on the Packard emblem. 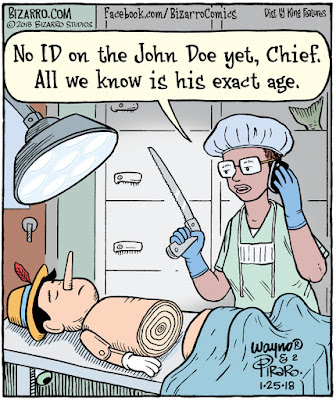 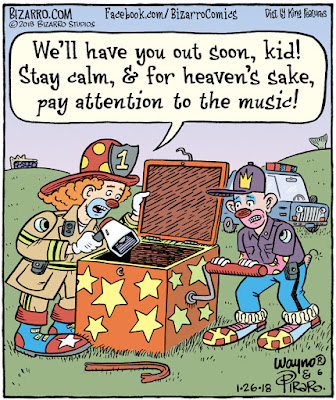 The drawing that sets up Thursday's gag is rather weird, but it's consistent in its twisted logic. For the joke to deliver, the reader has to "hear" the music, and then anticipate what comes next. My friend Shannon Wheeler once told me that his best cartoons (which you've probably seen in The New Yorker and elsewhere) show the middle of a narrative, with the reader filling in the beginning and the end. That was my intent here, and I think it came pretty close. 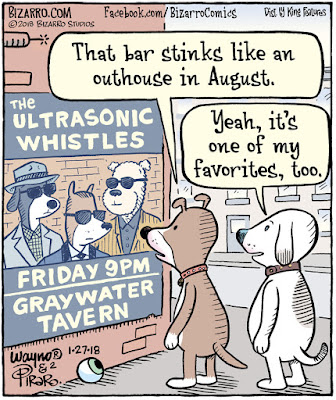 Dogs. They sure love smelly stuff, don't they?

That's the latest from Bizarro Studios North. Please surf over to Dan Piraro's blog for his thoughts on this week's offerings. 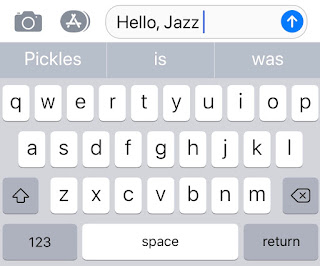 My smartphone has learned that I'm working on Bizarro. When I type the word "Jazz," the predictive software anticipates "Pickles" as the most likely word to follow. This is either cool or creepy. Maybe both. 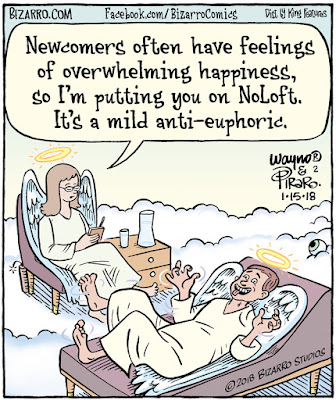 If there really is an afterlife as depicted in popular culture and various belief systems, new arrivals might well be overcome with manic pleasure, and celestial therapists would be needed to help them adjust. Right?

Ask your doctor if NoLoft is right for you. 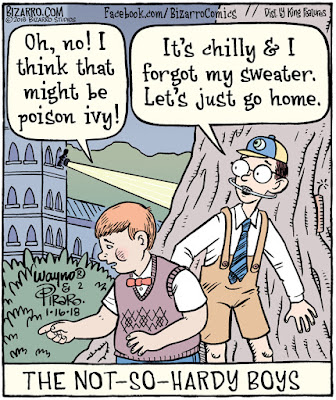 The layout of today's cartoon spoofs the 1950s cover art to The Tower Treasure, the first book in the eternally popular series, although my characters look as if they might have come from the original 1927 version.

The fictional brothers usually got involved in solving crimes being investigated by their father, Detective Fenton Hardy—often at Dad's request. Fenton really believed in Take Your Child to Work Day. 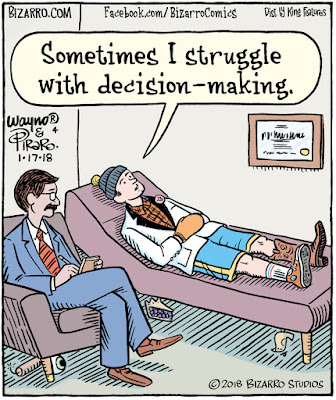 The second therapy cartoon of the week includes a patient suffering from Obvious Statement Disorder, and four Secret Symbols. 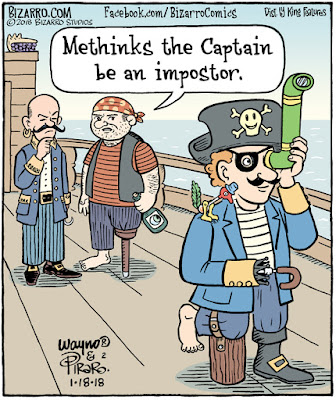 Bizarro's CEO (Chief Eyeball Officer) and I exchanged several emails discussing accessories for the phony pirate. I'm torn between "umbrella up the sleeve" and "drinking bird on the shoulder" as the most ridiculous. 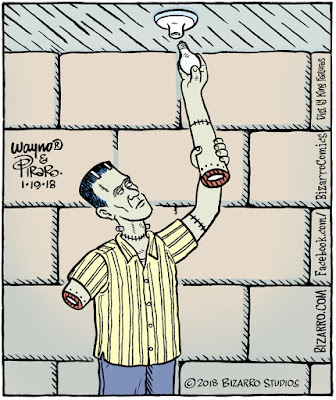 This gag with Frankenstein's monster doing a mundane task is my favorite of the week, mainly because I like drawing him, but also because I'm always happy when we come up with a cartoon that does its job without words.

As you may know, some newspapers only had a comic strip sized space available when they picked up Bizarro, so we also produce a "landscape" version of every cartoon. This one was tricky since the image is so vertical.

Usually, we move a word balloon or caption block around, and tinker with the art a bit to make it work in a strip layout. But every once in a while, you have run a tall, skinny gag sideways. Readers of the strip version not only get to see Frankie's shoes, but also the eyeball symbol that was out of frame in the regular panel. 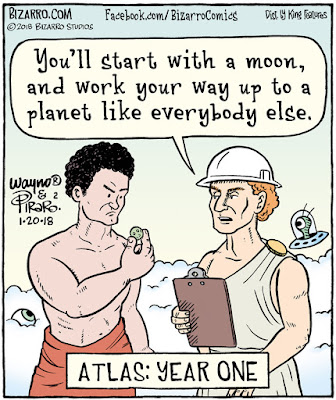 Our final gag of the week shows a character from Greek mythology when he was the new guy on the job, before he got the gig carrying Earth on his shoulders. As the new guy on Bizarro, I can relate, but unlike Atlas, I'm thrilled to be here!

Be sure to surf on over to Dan's blog, where he offers his own comments on this week's cartoons, and tops it off with another spectacular Sunday panel.

You ought to read Dan's blog every week. I do, and not just because Siri told me to.

Week 2 of Bizarro 2018 has wrapped up, which means we've gone 14 days without a lost-time accident.

Here's a recap of this week's offerings. 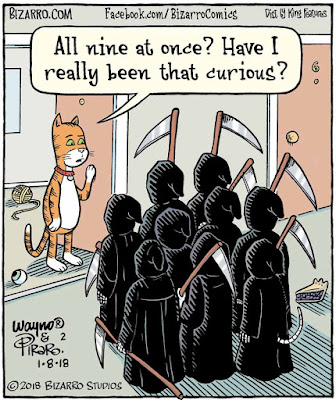 The Grim Reaper is a favorite of cartoonists everywhere, and we figured this panel should be nine times as funny as a cartoon with just one reaper. The additional ink needed to draw and print the extras comes to you at no extra cost. 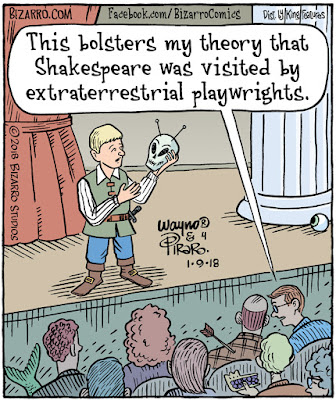 Here's what can happen when you wait until the last minute to order props for your theater. There were no human skulls available, so this production of "Hamlet" had to settle for an alien cranium. They hoped no one would notice, but there was an eagle-eyed crackpot in the front row. 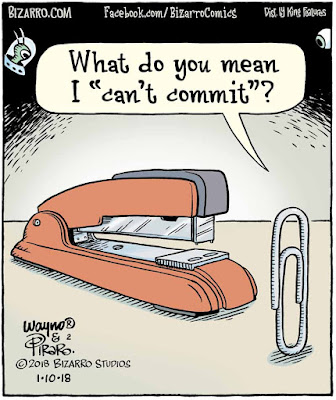 Office supplies analyze and critique each other just like we do. 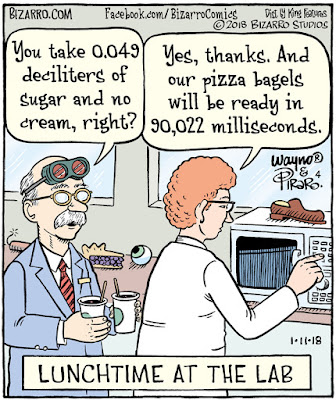 This caption originally read, "Lunchtime at the National Bureau of Standards," but that left no room for the picture, so we went with "the lab" instead. This marks my first use of The Lost Loafer. 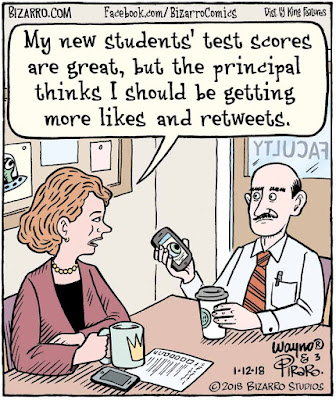 Here at Bizarro Studios, we admire educators. Teachers work very hard—at least our teachers did—and they rarely get enough thanks. This gag is a token of our appreciation for all they do. It's not much, but, hey, we just make cartoons, it's the best we have to offer. 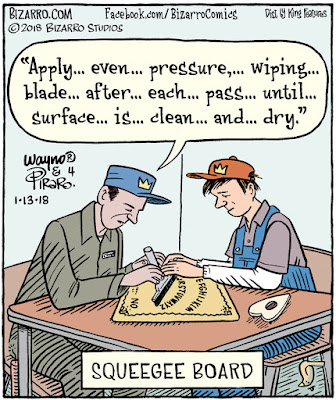 An example of reverse-engineering to set up a weird pun. While working on this one, we learned the word planchette. It's not the surname of an award-winning Australian actress, but, rather, that heart-shaped contraption used to produce messages from the spirits. A lot of research goes into your daily laffs!

That's it from Bizarro Studios North for this week. Be sure to read Señor Piraro's blog for a beautiful Sunday cartoon, plus Dan's commentary on this week's shenanigans.

Big thanks from the new guy (below, right) for all the nice comments, crazy suggestions, and words of encouragement.


See you next weekend.
7 comments:

We've wrapped up my first week at the helm of the Good Ship Bizarro, which I'm now piloting Monday through Saturday under the watchful eyeball of Cap'n Dan Piraro.

If you're new to this blog, welcome aboard! I've known Dan for almost ten years, and we've worked together many times before launching our new partnership on Monday. If you'd like to see our earlier collaborations, please feel free to click through this blog's Bizarchive.

Dan has a tradition of writing a weekly post reviewing the latest Bizarro panels, and encouraged me to continue that practice. I'm more than happy to oblige, as I enjoy talking about the process of creating cartoons.

So, without further introduction, here's a recap of my inaugural week of Bizarro. 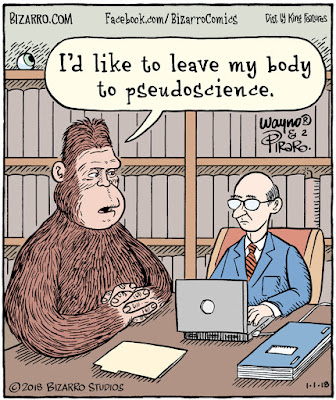 This punchline came before the drawing. All I had to do was decide which mythical creature to include. After scrapping sketches featuring a unicorn and Nessie, I settled on Bigfoot. He appears frequently in Bizarro, including one of my old gags.

I also included him a couple of times in my recently-retired feature, WaynoVision.
Here's one, and here's another. I'm confident he'll stomp into Bizarro again in the future.

If you're a fan of Sasquatch (and who isn't?), I heartily recommend Untold Tales of Bigfoot, by my good buddy Vince Dorse. It's a beautiful, all-ages story that deservedly won a National Cartoonists Society Reuben Award for online comics. 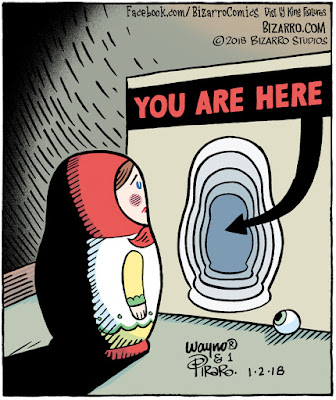 Tuesday's cartoon is rather dark and depressing. We thought that would be appropriate for a winter's day when a lot of people are returning to work after the holidays, if only to remind you that you aren't alone.

I once did another gag featuring a matryoshka* doll, and it was so popular, people copied it, deleted my signature, and shared it tens of thousands of times all over the web. Anything that gets stolen that widely deserves to be explored further. 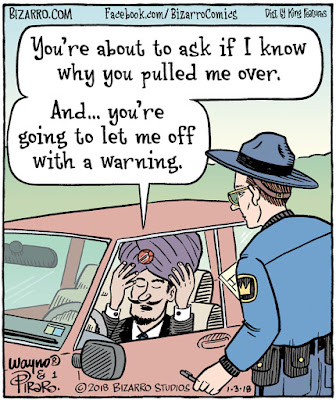 Is the driver actually psychic, or is he just messing with the cop? I'm a cynic, so I think he's pulling a fast one, but I admire his effort. 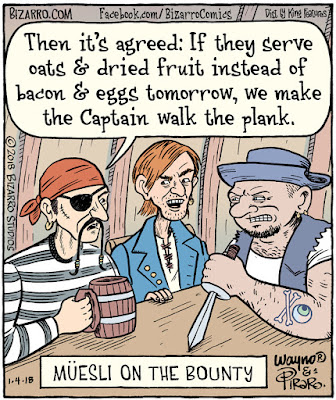 Since it's my first week here at Bizarro, I felt obligated to include a gag involving pirates. Also, since I come from Pittsburgh, my hometown friends expect it. We have some sort of sports club here called the Pirates. We had fun composing image and the ridiculous dialogue to set up this silly pun. Plus, we got to include an umlaut. 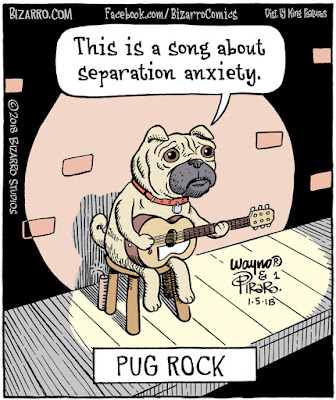 This is my favorite cartoon of the week. Although I live with two cats, I have a lot of doggie friends, and I'm probably more dog-like in my own personality. This one began its life as a sketch I drew for a friend. I thought it could work well as a cartoon, so here we are. Dan offered some artistic suggestions that helped make the little guy look extra sad and adorable. 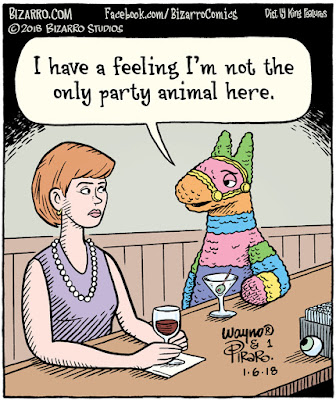 Saturday's comic features an overconfident papier-mâché character. Our editors felt our first sketch was a little too "S&M" for the funny pages, but we're happy to share the rejected version with you, dear Jazz Pickles. 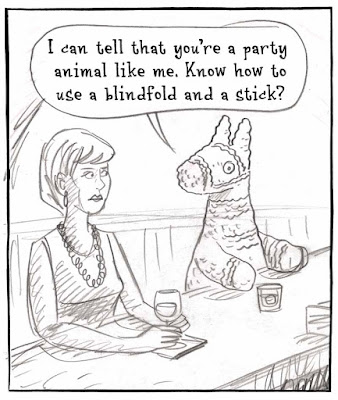 BONUS REJECT CARTOON PLUS MORE PUGS
Before I close, here's another piñata gag that was too naughty for the newspaper. 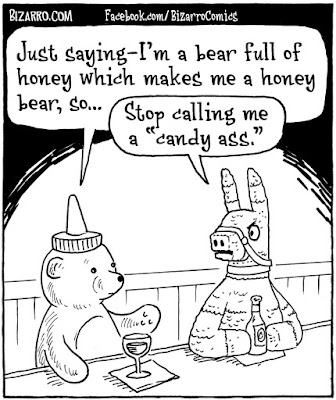 For the ultra-curious, the sketch that turned into Friday's cartoon: 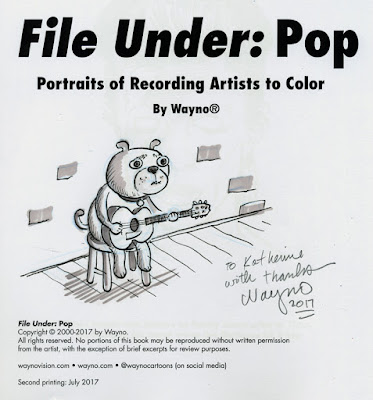 And finally, because pugs are so lovable, a portrait of a local canine pal: 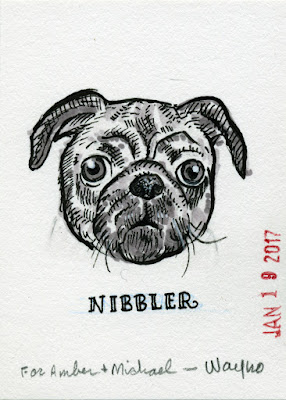 That does it for this week's funnies. Thanks to everyone who sent words of congratulations, commented, shared, or taped a cartoon to the fridge. We love to hear from readers, so please feel free to comment.

Don't forget to read Dan's weekly blog post, for his perspective on the week's offerings, capped by his spectacular Sunday comic.

See you in a week! I'll try to be less verbose next time, but make no promises.


*I have to look up that word every time I mention it.