Three of a Kind

Instead of opening this post with commentary on the second impeachment, we've decided to share this delightful street sign, spotted in the Bayou St. John neighborhood of New Orleans. 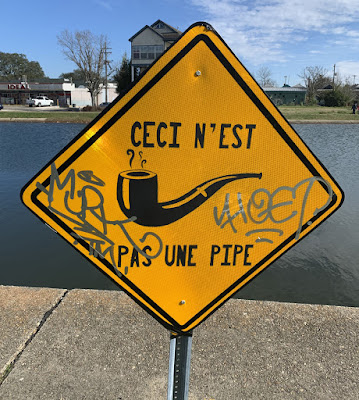 The photo arrived via text message from my friend Tom McDermott, a masterful piano player and composer who lives near the sign. He's also a prolific limerick writer, and a fine caricature artist. 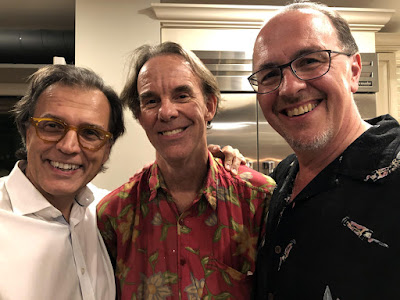 In the Year Before COVID, Tom McD paid a visit to Pittsburgh, and thrilled a small group of fortunate locals with a joyful house concert. That's him, sandwiched between your humble cartoonist, and my wildly talented bandmate Tom Roberts. Yes, I know two piano maestros named Tom.

I'm looking forward to a time when we're again able to gather to enjoy food, music, and each other's company. I'm preparing for that day by working hard in the studio to get a bit further ahead of publication.

Here's a look back at our most recent cartoon output. 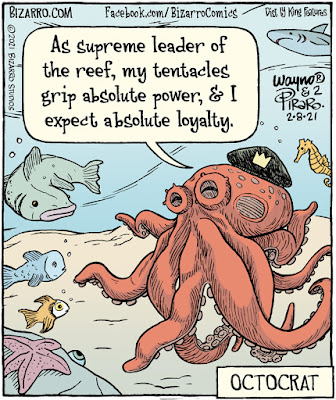 We kicked off the week with a punning and vaguely political gag.

I was pleased with the strip layout for this one.

My Bizarro Studios partner, Dan Piraro, recently recommended that I watch My Octopus Teacher, a documentary on Netflix, correctly predicting that it would blow my mind. Dan's also recommended it to readers via social media, and I heartily second him. Go watch it as soon as possible. 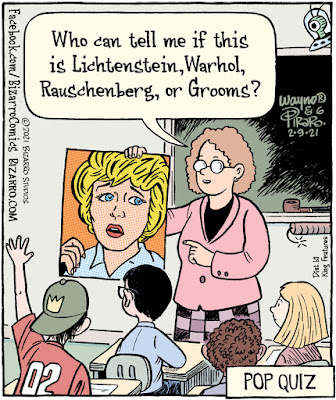 The art the teacher displays in this gag is loosely based on Roy Lichtenstein's 1964 painting, Nurse. I'm generally a fan of twentieth century pop art, although Lichtenstein engenders mixed feelings. He became wealthy by appropriating the imagery of living, underpaid comic artists, who never profited from his use of their art, transformative though it may (or may not) have been. Is making a large format painting of another artist's image significantly different from writing a symphonic arrangement of a songwriter's pop tune, which would involve payment for licensing? I don't know for certain, but it'd be worth discussing over drinks, when discussing things over drinks is possible.

While laying out the text, it occurred to me that "Lichtenstein, Warhol, Rauschenberg and Grooms"1 sounded like a lost Tom Lehrer song. I was probably half-remembering his composition about Russian mathematician Nikolai Lobachevsky.

Late last year, at age 92, Tom Lehrer put all of his musical compositions into the public domain, making them free for anyone to reuse and perform in any way they like. Instead of taking other artists' work without permission like Lichtenstein, Lehrer released his own creative output into the wild, in order to give it new life. 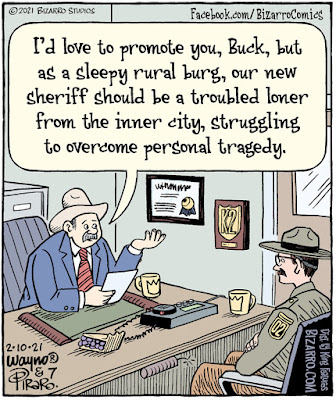 Netflix, Amazon, and other streaming services, in their endless hunger for content, have added films and TV series from all over the world. We've enjoyed quite a few series produced in Germany, Spain, Italy, Sweden, Norway, Finland, Korea, and elsewhere. We've also discovered that the trope referenced in this comic is alive and well outside of North America. 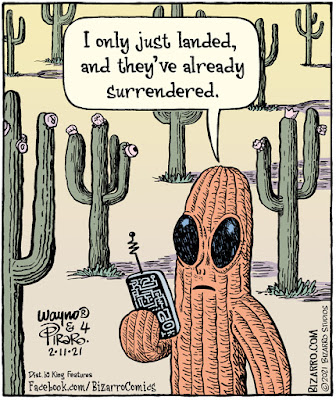 This celestial visitor was heard to describe us as "puny, prickly Earthlings." 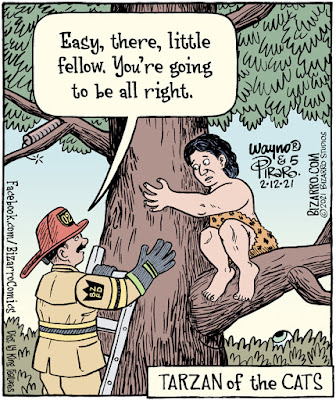 Tarzan of the Cats may seem meek compared to his cousin who was raised by apes, but at least he uses a litterbox. 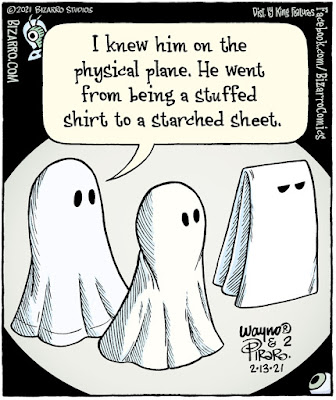 Thanks, as always, for visiting us here at the ol' blog. Don't forget to check in at Dan's weekly blog, too. He always has something interesting to say along with sharing his latest magnificent Sunday Bizarro page.

For those curious to hear Tom McDermott's music, here's a clip of him performing Professor Longhair's classic "Tipitina."

NOTE: Certain YouTube videos are unavailable outside the US. On some phones you must select "View Web Version" to see the video content

Tom is a self-employed musician navigating this time of limited (or nonexistent) opportunities to perform, so CD sales are more important than ever. If you're interested in some great music for your home, check out Tom's recordings, all of which are available from Louisiana Music Factory.

One of my favorites is his 2019 album Tom McDermott Meets Scott Joplin. Tom writes, "This isn't an album for purists, but I hope the impurists out there will wallow in its freshness." I couldn't have said it better.

I also love his book of limericks and drawings, Five Lines, No Waiting.

1) I've since realized that I must have been reminded of "Haldeman, Ehrlichman, Mitchell and Dean, a novelty song from the Watergate era. The dark corners of my brain are crammed with useless material.

Thanks for the recommendation: I just bought the Scott Joplin CD.

Thanks for helping to support an independent musician. Let me know what you think when you’ve heard it.

Having lived for 17 years in the Bayou St. John area of New Orleans, I was thrilled to see your mention of that great area of the city that care forgot as well as a shout out to Tom McDermott. So many of the great musicians everywhere have been hit hard by COVID restrictions. One can catch some great local music all weekend (in celebration of Mardi Gras) streaming on WWOZ 90.7, might even catch a recording by Tom himself,

Wayno, I have another friend named Tom who is a piano impresario and songwriter (and often accompanies the super-group, "Kansas.") His website is https://tombrislin.com/

I absolutely support the recommendation for "My Octopus Teacher". I saw it while on vacation in October (who else but a Canadian goes to Ontario for an October vacation?) and vacations mean I miss my dog; so the close-to-last scene turned me into a puddle. I don't spoil it by saying why.

Re Lichtenstein, is that a recognizable work by another artist? That's an actual question: I had simply assumed he was adopting an established style, in the same way some comic strips use minimalist backgrounds, a-la Peanuts. I agree with your point: if I write a string quartet version of, say, "Empire State of Mind", I'd better fork over a pound and a half of flesh to Alicia Keys.

When my blind cat went missing I found him stuck up a backyard tree 24 hours later. He was as timid looking as Tarzan.
Lots of fun this week. Thanks!

Maybe you're remembering another Tom Lehrer song about "Gustoff and Walter and Franz," about the widow Alma, who married three of the great creative minds of the 20th century?

I was thinking of a song that had nothing to do I with Lehrer: “Haldeman, Ehrlichman, Mitchell and Dean.”