Nearly two years ago, I submitted this doctor/patient gag as a Bizarro candidate: 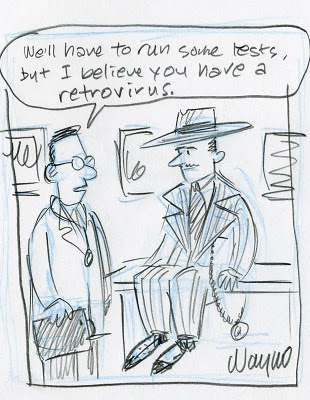 Bizarro's creator, Dan Piraro, occasionally publishes cartoons in Parade, the Sunday newspaper supplement, and included his version (below) in a group of submissions. They accepted it in August of 2010. 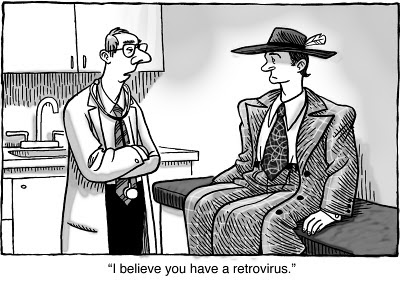 I've been waiting ever since to post it, but we never knew when (or if) Parade ever actually ran it. Fortunately, Google came through today, and I discovered that it was in fact published in the August 21, 2011 issue, although it was severely cropped to fit into a single column. 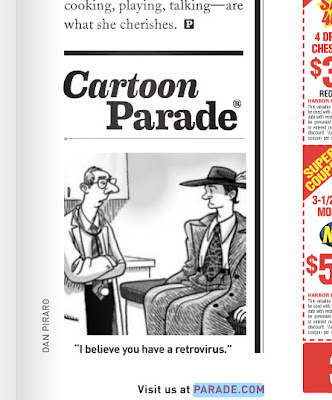 Finding evidence of this cartoon's publication is certainly a relief, and removes one item from my list of nagging obsessions. Consider this an unreleased outtake for the eventual Piraro/Wayno cartoon box set.

As always, please feel free to browse all of our previous collaborations in this blog's Bizarro archive.
1 comment:

Today's Bizarro takes us on a visit to a cubist mechanic. 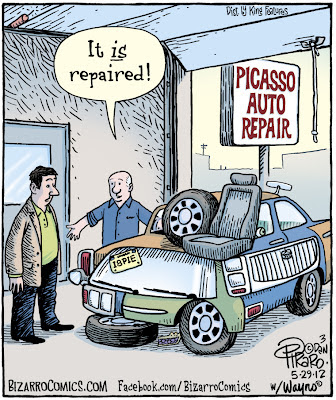 Here's the sketch I submitted to Bizarro's CEO, Dan Piraro: 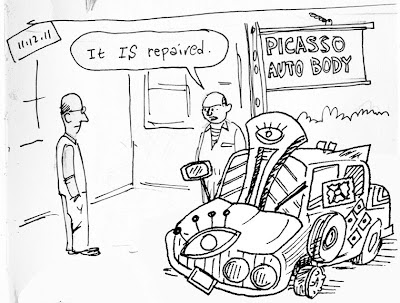 There are countless improvements in Dan's finished version. The car itself is much better, in that it consists solely of rearranged car parts, whereas in my sketch I added elements from Picasso's paintings and sculpture. That extra stuff was unnecessary, and, really, where would a misguided mechanic get those things? Dan's art perfectly conveys Picasso's both-eyes-on-the-same-side-of-the-face style, without overselling the gag.

I also love the look of innocent enthusiasm on his Picasso, versus the artistic petulance of mine.

I still like the striped jersey under the blue mechanic's shirt in my sketch. Also, I'd prefer not to use the words "repair" and "repaired" in the same panel, but these are mere nits.

The inspiration for this gag came from an actual building we pass whenever we visit my dear friend, ace cartoonist/illustrator Mark Zingarelli and his lovely family: 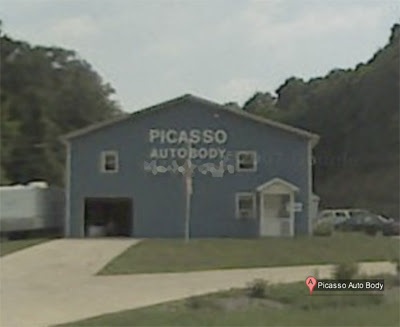 I've often wondered whether a wrecked car would emerge from this place looking better or worse than when it entered.

That talented gentleman Dan Piraro and I currently have seven new gags waiting in the wings. Meanwhile, please enjoy all of our earlier collaborations here.
1 comment:

I recently had the opportunity to work with THIS IS RED and The Manchester Craftsmen's Guild, providing illustrations for the program for MCG's 2012-2013 concert season.

The smörgåsbord of musical offerings has been dubbed The Jazz Buffet, and we came up with a design recalling vintage cookbooks.

The program is being printed now, and MCG has released one of the interior spot illustrations in a banner on their site.

It's an honor to be associated with the Guild, one of Pittsburgh's educational and cultural jewels, and the folks at THIS IS RED were delightful collaborators.

Stay tuned for more images when the booklet is released. If you live in or are visiting Pittsburgh, you owe it to yourself to hear some music in the MCG's intimate auditorium.
No comments: