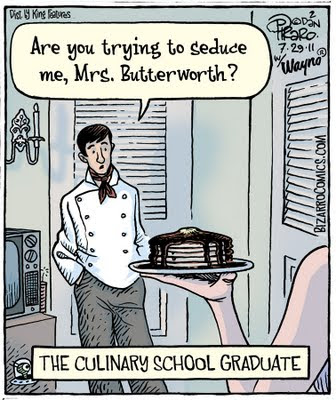 Dan Piraro's final art is nearly identical to my sketch... 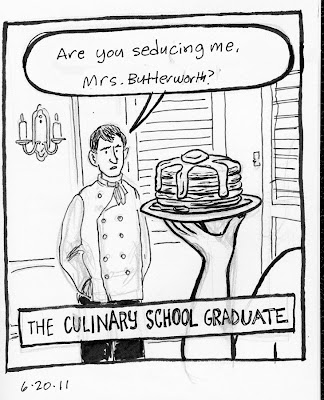 ...which was designed to ape the original movie poster. 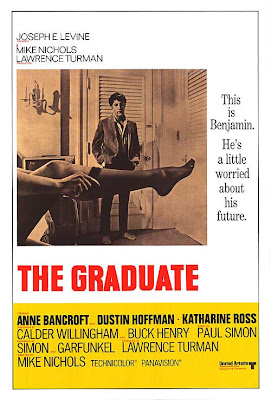 The image of Dustin Hoffman, dwarfed by Anne Bancroft's leg* in the foreground, along with the dialog, has become such a part of pop culture's DNA, that most people would get the reference even if they'd never seen the movie. A mere passing familiarity might even make the joke work better, since we fudged the wording a little. The actual line is "Mrs. Robinson, you're trying to seduce me." Our line is close enough to trigger recognition, similar to Woody Allen's use of the title "Play It Again, Sam," although that line was never actually spoken in Casablanca. Since the name of the character (changed from "Robinson" to "Butterworth") is the kernel of the gag, moving it until the end of the sentence makes it more effective by delaying the payoff for a beat. You might call it tantric humor.

"Butterworth" also has the name number of syllables as "Robinson," so the rhythm of the line is maintained, which reinforces the gag. A one- or two-syllable name just wouldn't work.
• • •

The idea for this cartoon began with free-association. I was playing around with the names of teams and couples, trying to find a variation that worked as a joke, but nothing really came of it. 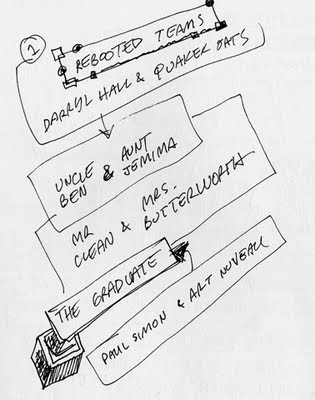 Thinking about Simon & Garfunkel gave me the idea of referencing The Graduate. I jotted down the title, abandoned that line of thought, and closed my sketchbook.

A couple days after I scribbled those notes, Dan Piraro himself visited Pittsburgh to do a comedy show, and spent some time here in town. On our way to meet a group for dinner, we spotted a mascot for the Waffle Shop on the street and took advantage of the chance encounter to snap a couple of photos: 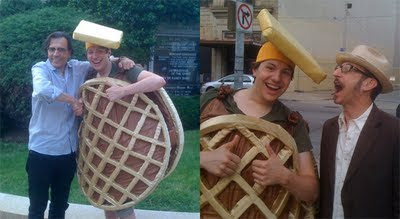 The next day, after sketching the waffle guy in my book, I glanced at the facing page, with the list of names and titles shown above. I added a foreground figure and a talk bubble, producing this rather ridiculous scene: 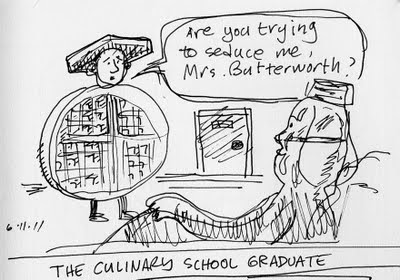 We both got a laugh out of this, remembering our encounter with Waffle Boy the night before.

A week or so later, I looked at the sketch again. I was pleased with the rhythm of the dialog, but decided that the image was too silly and obscure for publication. I reworked it as the June 20 sketch, which closely follows the well-known movie still. This contained just a bit of oddness: a stack of pancakes in the foreground, and Hoffman's character dressed in chef's whites.

As you may recall, I've been doing the coloring for the Monday through Saturday Bizarro comics for several months now. I'm particularly happy with the moody colors and shadows in today's panel. The original movie image was inspiring, and got me wondering if Mike Nichols' set decorator tried out multiple sconces and candles to find a set that cast the perfectly phallic shadow in that scene.

My previous collaborations with the great Dan Piraro can be viewed in the blog archive. The next one (number 50!) will appear on Friday, August 12, but before that, I'll have a new one in Hilary Price's Rhymes With Orange.
*Wouldn't Anne Bancroft's Leg would be a great name for a band?
2 comments:

Today's contentious Bizarro comic, the latest to feature one of my gags, exploits the potentially confusing result of foreign words entering the language. 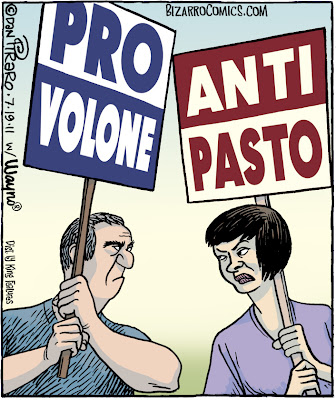 There's not a lot to discuss regarding the structure of this joke. It's quite straightforward and satisfying, even if it does make me hungry. Dan Piraro's finished art is very similar to my sketch, although he refined it by deleting the caption at the bottom: 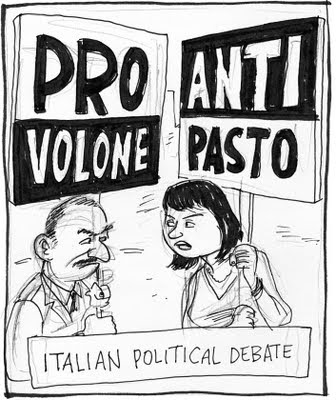 Mister Piraro and I are both of Italian descent, but we agreed that (in addition to giving the joke more punch) removing the caption might prevent negative responses to perceived insensitivity. As I recall it, Dan opened the conversation by saying,"Mediterranean, please!"

One could possibly read it as a comment on the way people can become agitated about things they don't understand, or the creation of bogus issues designed to distract an uneducated populace, but I really wasn't thinking that deeply at the time. However, if someone makes that case in a term paper, I'll certainly take credit for it.

Another food-related gag will appear next Friday.

My earlier collaborations with Dan can be viewed in the blog archive. We're approaching a bit of a milestone appearance, and of course I'll make a big deal out of that.

In other news, after a gap of a few months, I have more gags are coming up in Hilary Price's comic, Rhymes With Orange, and I'm working on a PowerPoint presentation for an appearance as guest lecturer in an illustration class at the Art Institute of Pittsburgh. I've been assured that tuition is non-refundable.
4 comments: