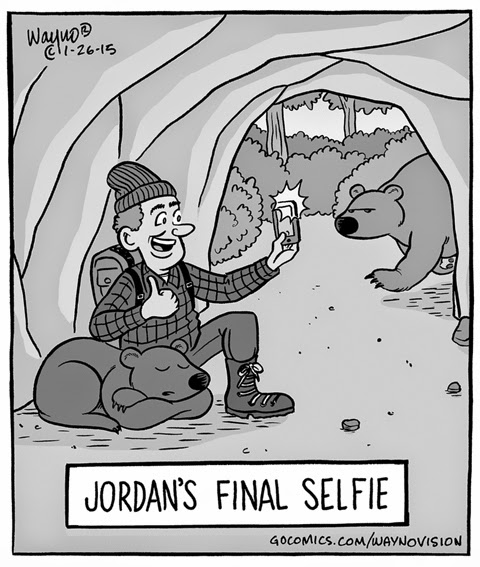 This panel was drawn months ago, but its publication is timely, after this weekend's news reports of several bears dying in the New Hampshire woods after "sportsmen" baited them with chocolate, which is toxic to many animals, bears included. Apparently, trapping bears is illegal, but baiting is A-OK. Baiting is the practice of luring the animals to the hunter's location, where they can be picked off with firearms.

I wasn't aware of this hunting situation at the time, but wanted to comment on our tendency for over-documentation of experiences (real or fabricated). A pet peeve of mine is watching a musical performance through the cellphone camera of the person standing in front of me.

I'd also recently read reports of the fad for dudes to have their portraits taken in the company of exotic animals for posting on dating sites, which eventually led to today's gag.

Amazingly (to me, anyway), according to an article in today's Telegraph (UK),"bear selfies" are actually a craze that's causing concern in the US Forest Service!

Thanks for following the blog, and please visit the GoComics WaynoVision page regularly. Every click puts a fraction of a penny into my pocket!
1 comment:

Once again, I've had the pleasure of working with East End Brewing Company, designing a label for one of their special bottlings. This time around, it's Sketchy Beer: 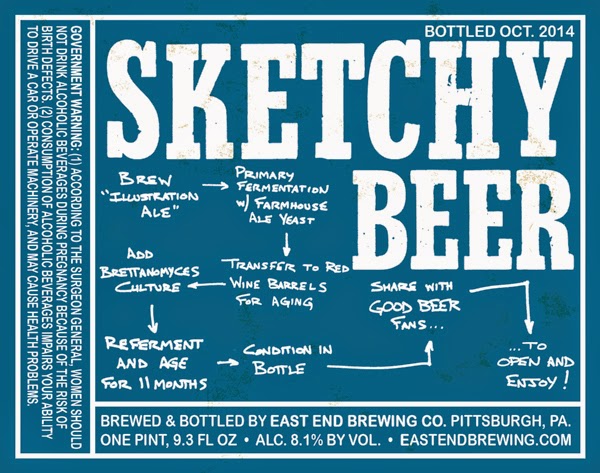 Sketchy is appropriately named, given its long and circuitous journey to the swingtop bottles it currently occupies. It began its odyssey in 2013, when Scott Smith and the EEBC gang brewed the third incarnation of Illustration Ale, a project I've served on as "curator," recruiting six Pittsburgh artists to create labels, and shepherding the art through the Federal approval process along with Scott.

There was a spot of trouble with the yeast, which, like any live organism, doesn't always follow orders, and it didn't condition the beer properly. The original bottling had insufficient carbonation, and was not up to East End's quality standards, so they started over with a re-brew, and Illustration Ale was released to great acclaim, with labels created by six terrific artists.

Ever game to experiment, EEBC carefully transferred all of the original batch—over a thousand bottles!—into red wine barrels, and did an additional slow fermentation/aging of the beer with a brettanomyces culture. The beer aged in the barrels for nearly a year.

When they did a tasting panel to assess the barrel aged brew, it was found to be an excellent beer. Some tasters judged it to be better than the original base recipe. It was bottled in October of 2014, and while it conditioned and carbonated, we started talking about a label design.

All along, Scott knew this would be named "Sketchy," but beyond that, he was open for ideas. After a few false starts and wrong turns on my part, we decided on a label that calls to mind a well-worn blueprint. While working on the layout, Scott sent me a handwritten flowchart describing the path the beer took, as if we'd planned it all along. A sketchy plan, indeed. Rather than re-draw the flowchart, I thought it would be perfect to have the brewer's hand featured on the label, and just rearranged it to fit into the design.

I've yet to taste this one, but am of course looking forward to it!


To view some of my previous work for our good friends at EEBC, browse the blog's beer cellar.
1 comment: