Today we should all congratulate ourselves on (just about) making it through the first month of the new year. I'm trying to maintain a positive attitude, so let's say we're one month closer to getting our COVID-19 vaccines. 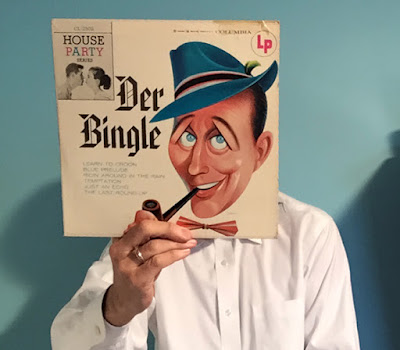 While scrolling through my photo archives, I came across this 2015 "record head" shot featuring a forebear of the Pipe of Ambiguity. The record cover art was done by Sam Norkin (1917-2011). Norkin was a prolific cartoonist who specialized in caricatures of Broadway actors and ensembles. At first glance, his work probably reminds the viewer of Al Hirschfeld (1903-2003). While there are similarities in style, and certainly in subject matter, Norkin's art is more wildly exaggerated and angular, even Cubist. 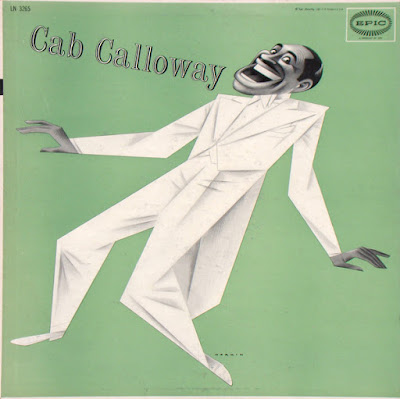 Norkin did this wonderful drawing of Cab Calloway for a 1955 LP on Epic Records.

The "Bingle" photo is a souvenir from a phase I went through several years ago, when I wasted a lot of time taking record-head selfies with items from my collection. It was fun, but thankfully, I now have a weekly deadline to keep myself busy making cartoons.

Speaking of which, here's the latest batch to roll off the production line here at Bizarro Studios North. 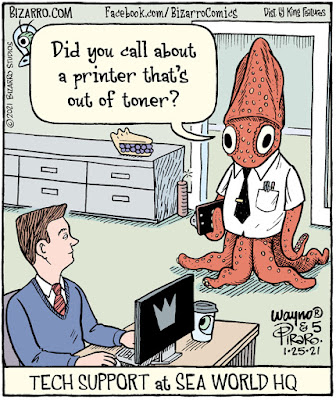 He's a good employee, but don't startle him when he's concentrating on a repair. 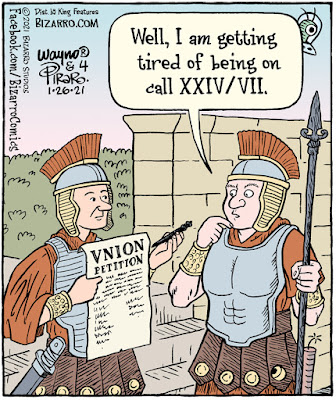 The only time most Americans encounter Roman numerals is in reference to Super Bowl games, although the NFL showed less than total commitment when they named the 2015 game "Super Bowl 50" instead of "Super Bowl L." Apparently, some football fans were miffed, but maybe it was a wise decision. The version with the Roman numeral almost looks like "Super Bowel." 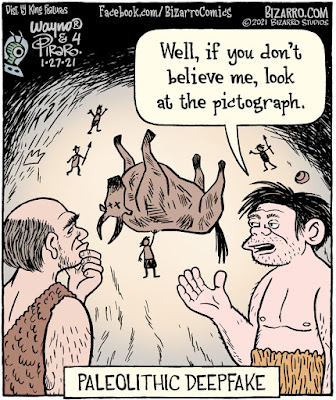 While doing my research for this gag, I learned the difference between the words pictograph (a drawing or painting on a rock wall) and petroglyph (a carving or inscription in rock). 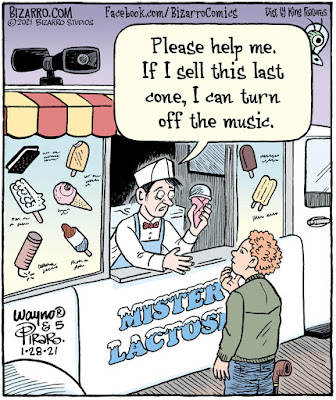 The CEO of the Mister Lactose Corporation is a former military operative who participated in musical torture initiatives. 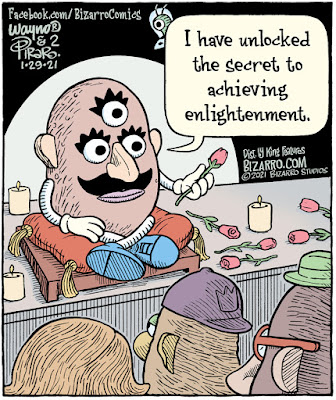 Friday's spiritually-enlightened spud was fun to draw, although I later realized that for potatoes, having more than two eyes isn't a big deal. 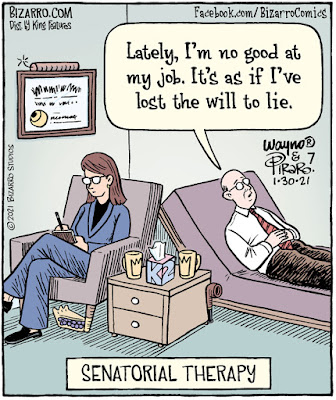 We ended the week with an unintentionally timely gag. Fortunately for this patient, he has more than forty colleagues who are eager to show the way, and then some.

That's the latest from our US headquarters in scenic Hollywood Gardens, PA. Thanks for popping by. Don't forget to visit Dan Piraro's blog to check out his latest Sunday Bizarro. He's also been reporting from what looks to be a restful getaway on a mountainside near Oaxaca City, Mexico. He seems to be in an enviable state of relaxation and bliss, which makes me very happy for him.

NOTE: Certain YouTube videos are unavailable outside the US. On some phones you must select "View Web Version" to see the video content.

Squeeks (Squid Geeks) are multi-talented, and can bring their 8-A-Game to any Printer Condition.

I have always loved Tom Waits, and the piano intro to Ice Cream Man is one of my favorites. I realized he was an artist after my own heart when he was a guest on Fernwood Tonight with Martin Mull and Fred Willard. He sat down and proceeded to take out a bottle of whiskey from his coat and set it in front of him. Mull commented that he'd never done an interview with someone who brought their own booze with them. Waits, without missing a beat said, "I'd rather have a bottle in front of me than a frontal lobotomy."