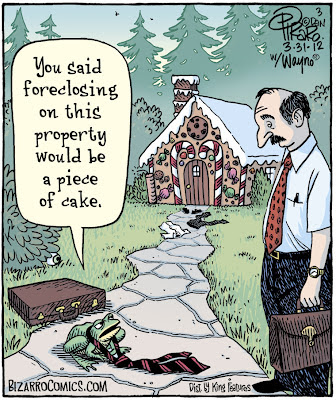 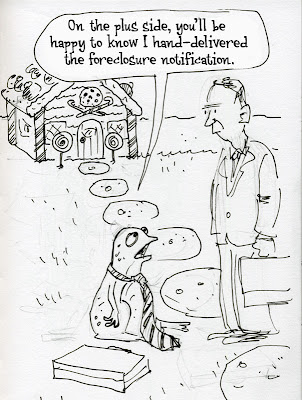 Dan and I exchanged a few emails to hammer out the dialog, which needed some work.

Wayno: The joke here is supposed to be that the guy delivered a foreclosure notice to the owner of that house who responded by turning him into a frog. Obviously, it doesn't quite work!

D: Ah, of course. That's a good premise, but maybe there's a better way to present it.

W: How about if the frog says: "I though you said foreclosing on this homeowner (or property) would be no trouble at all." (or "a piece of cake")

We agreed that this did a better job of setting up the payoff for the reader and proceeded with the final version appearing in today's panel. The image of a frog wearing a human-sized necktie is pretty amusing, and Dan improved on it by showing the rest of the broker's clothing in the background.

I'd been toying with this idea for over four years, and drew the first version as a proposed magazine panel back in 2007. 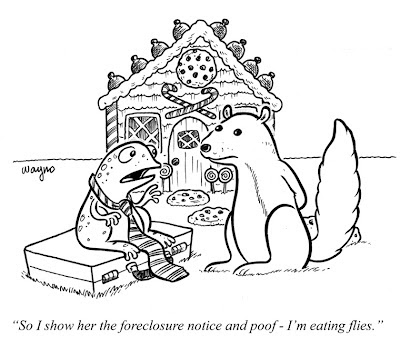 I haven't looked at the original version in a while, but I still like it. In my head, the frog speaks in the voice of Jackie Mason. The art in this one has an error in perspective. The house looks like a tiny, frog-sized structure that's right behind the characters, rather than a normal-sized house farther back.

The main lesson I took from this is to avoid any gag involving a gingerbread house. They're a pain to draw and to color!

If you'd like to kill some time, check out the ninety-plus Bizarro comics I've done in collaboration with the great Mister Piraro here.

While preparing for a new project with my good pals at East End Brewing Company, I came across some concept sketches for the Smokestack Heritage Porter label.

Since 2007, they've bottled three batches of this dark delicious brew, and for each new release, we've tweaked the label's color scheme.

My first sketch proposed issuing the beer with a pair of labels, one with a female and the other showing a male millworker. 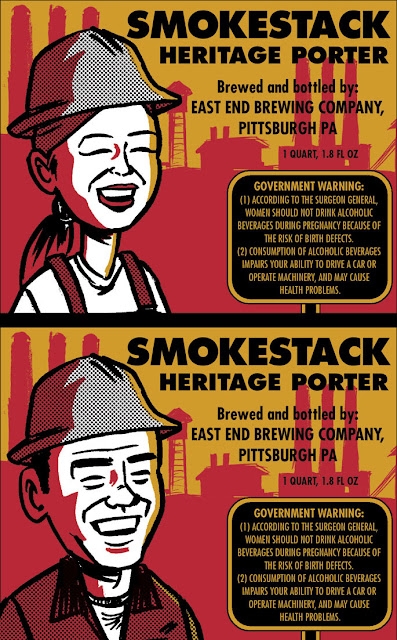 This one attempted to incorporate the government warning into the design, placing it on a sign next to the label mascot.

East End's Scott Smith liked the color scheme and concept, but requested a looser, more cartoony character. In the interest of economy, we also decided to go with just one label for this 600-bottle batch, and I prepared this revised sketch. 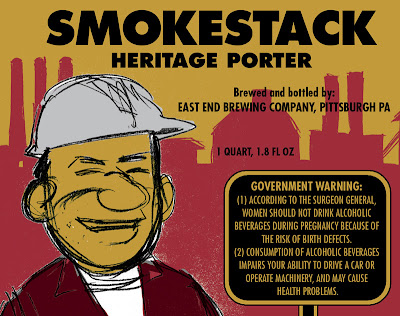 Again, Scott asked for a looser look, resulting in this (superior) design: 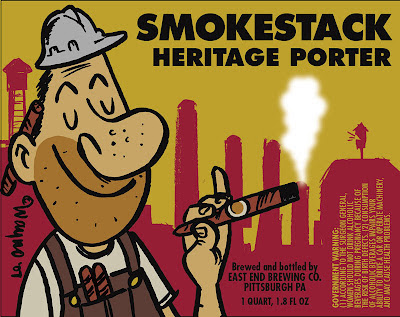 I was very pleased with this one, particularly the puff of white smoke, placed such that it could be coming from either the cigar on the smokestack in the background. We abandoned the warning sign, reduced the text to its legal minimum size, and rotated it 90 degrees, blending it into the background.

The finished labels (below) were pasted on by hand, and East End customers happily bought up the entire run in short order. 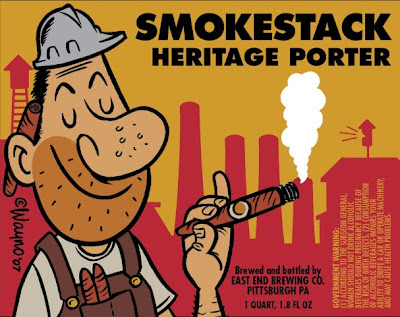 A second batch of SHP was brewed in 2008, and we adjusted the color scheme to distinguish it from the earlier bottling. This palette is a little subtler, in keeping with the beer's mellow, dark flavor. 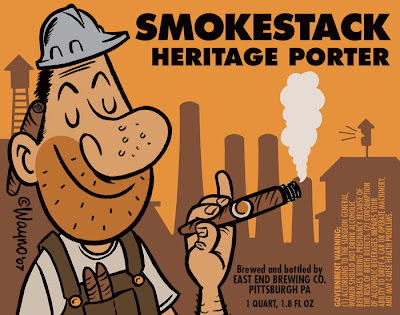 Last October, Scott brewed the most recent batch of Smokestack Heritage, and we fiddled with the color scheme again, toning it down even more. 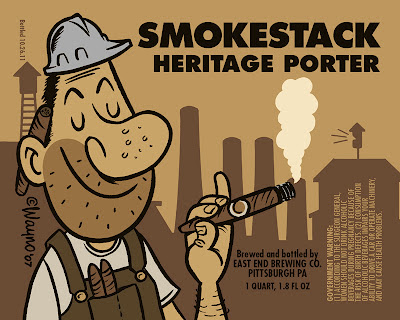 This one, which came four years after the first iteration, is my favorite. The 2007 version now looks harsh and garish to me, while the latest coveys an almost historical feel. If we were to do a fourth release, I think I'd change the hard hat to a sepia shade that matches the rest of the label.

One other tiny but significant addition here is the inclusion of the bottling date, for collectors who plan to cellar their beer.
1 comment:

First up is the finale of my week as the featured guest cartoonist in Rhymes With Orange:
The idea for this gag came to me when I was part of a staggering mob of caffeine addicts at the espresso counter. The look of defiant determination in the barista's eyes reminded me of any number of heroic zombie-fighters.

Hogging additional real estate is my latest collaborative gag with Dan Piraro, in his comic, Bizarro.

Here's the sketch I submitted to Dan for this one: 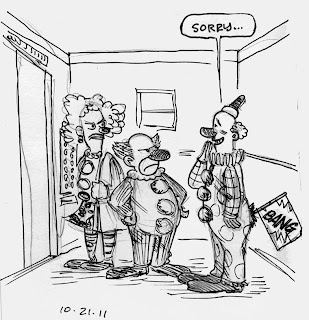 The final composition follows my sketch closely, reformatted for the wider aspect ratio of a Sunday strip, with some nice bits of business added to the characters. A few readers find some of my cartoons to be esoteric or highfalutin', and I don't necessarily disagree with them, but I do enjoy the occasional fart joke, too.

It's been a pretty exciting week for me, and I offer heartfelt thanks to my colleagues Dan Piraro and Hilary Price. I'm honored to see my work in their comics, which are always worth reading.
No comments:

My week as the guest artist at Rhymes With Orange continues with this endless jam.
This marks the second time in my career that I've published something related to the Jerry Garcia and company. The first was an appearance in Grateful Dead Comix #3, back in 1991.

Check this space tomorrow to view the final comic in my Rhymes With Orange series, plus a fresh Bizarro gag.
No comments:

Today's fiscally-responsible Rhymes With Orange reminds us about the pitfalls of an undiversified investment portfolio.
This one might be my favorite of the week. Stop by tomorrow for another shot of humor.
No comments:

Email ThisBlogThis!Share to TwitterShare to FacebookShare to Pinterest
Labels: alcohol, Rhymes with Orange

Here's Thursday's Rhymes With Orange comic, passing the midpoint of my week as Hilary Price's guest cartoonist.
Growing up with an endless supply of monster movies on local TV, I'd always imagined that Bavarian villagers kept a supply of wooden pitchforks on hand in case they decided to storm a mad scientist's castle.


Tune in tomorrow for the another frightening gag.
1 comment:

Day three of my Rhymes With Orange showcase week is Football Day!
The idea for this gag came from my friend Armand, who suggested the image of a referee who'd been tied to the goalposts by angry fans, saying something along the lines of "Tough crowd."

I thought the idea was quite funny, and I always enjoy giving deadpan dialog to characters in bizarre situations. My original sketch was quite different from the eventual published version: 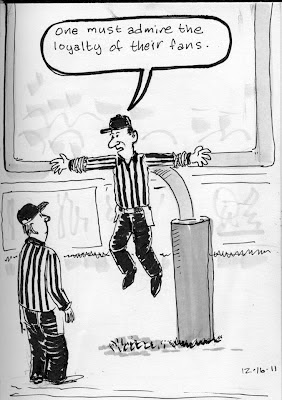 I made the ref's comment on his situation even milder than "Tough crowd," and laid out the comic for a vertical panel. However, the sketch presented a couple of challenges. The first was a matter of geometry: the gag would have to be rearranged to accommodate the horizontal layout of a strip. Secondly, the obvious crucifixion imagery would probably whip up legions of angry supplicants, who'd surely find reason for offense and indignation. So, in its original form this would never fly in the daily paper.

Comparing sports fandom to religion is certainly valid, and I make that point often, but the imagery was so loaded that the joke would have been overshadowed, and I'm quite satisfied with the final result.

Thanks to my buddy Armand for the germ of this one! He very modestly told me that he was excited to see his "first gag idea in 60 years" appear as an actual comic.

Check in again tomorrow for another Rhymes With Orange comic by yours truly.
No comments:

Email ThisBlogThis!Share to TwitterShare to FacebookShare to Pinterest
Labels: Religion, Rhymes with Orange

Glum Morning to You

My week as Hilary Price's guest cartoonist continues with this look at family dynamics.
I sketched the art for this cartoon last fall, and had been tinkering with the dialog for months, before finally settling on the "antipathy" line. 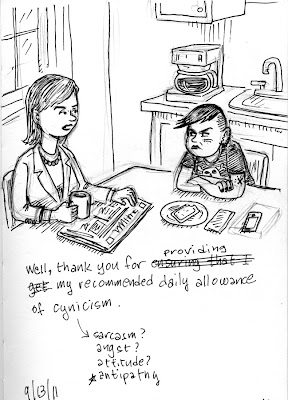 A publishing deadline is very helpful to the indecisive self-editor!


Tune into this page for the rest of the week to see more Orangey goodness.

This week, I have the privilege of appearing as guest cartoonist in Hilary Price's witty comic strip Rhymes With Orange.

Many syndicated cartoonists simply reprint old strips when they take time off, but when Hilary goes on vacation, she generously invites other artists to fill in for her.

I'll post the strips here each day throughout the week. To see the colorized versions, visit Hilary's site, but be warned, you'll probably end up spending a long while there as you scroll through her cartoon archives.
No comments:

Today's Bizarro features a line that I swear was actually uttered during one of the many debates over the past several months. 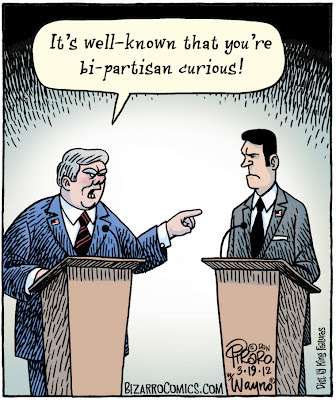 My sketch for this panel was fairly rough. In fact the guy on the left looks like his podium is falling over. 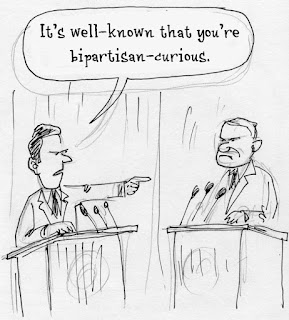 In addition to this Bizarro appearance, today I'm kicking off a week's run as guest cartoonist in Hilary Price's award-winning comic strip Rhymes With Orange, which is covered in a separate blog post.
1 comment:


Wayno to Appear as Guest Cartoonist for Hilary Price's "Rhymes With Orange"
March 19 through March 25, 2012

Rhymes With Orange, Hilary Price's award-winning daily comic, will showcase the cartoon work of Wayno from March 19 through March 25, 2012.

When Rhymes With Orange was launched in 1995, Price was the youngest woman ever to have a syndicated comic strip. She is an educator as well as a cartoonist, and regularly teaches a very popular gag-writing workshop. While many cartoonists reprint old cartoons when they take time off, Hilary welcomes guest cartoonists to fill in during her occasional breaks. Previous RWO guests have included such creators as Mo Willems, Suzy Becker, Karen Sneider, Jen Sorensen, and Rina Piccolo.

Wayno is no stranger to the daily comics page. He's a regular gag writer—as well as the daily colorist—for Dan Piraro's Bizarro, and he filled in as Bizarro's guest cartoonist for two weeks in 2011. "Writing and drawing for Rhymes With Orange was an enjoyable challenge. I usually draw gags in a vertical panel format. The 'widescreen' layout of Hilary's comic forced me to re-stage them to take advantage of those dimensions. As the reader's eye moves from  left to right, the artist has an opportunity to delay revealing the gag for an extra beat or two. It was a great learning experience, and I appreciate Hilary's trust in turning the space over to me for a week."

Rhymes With Orange returns to normal (though the cartoon's outlook is anything but "normal") on Monday, March 26.

Hilary B. Price is the creator of the witty, offbeat daily comic Rhymes With Orange. She serves as Vice President of the National Cartoonists Society, and has received two NCS Awards for Best Newspaper Panel. Rhymes With Orange is distributed by King Features Syndicate, and appears in 175 newspapers.

Wayno is a cartoonist, illustrator, pop artist, and writer based in Pittsburgh, PA. He is a member of the National Cartoonists Society, and a founding board member of the ToonSeum. In 2010, Animal Friends selected him as their Honorary Artist for Black Tie & Tails, which raised over $400,000 for the pet adoption & resource center.

For more information, visit the artists' blogs and Twitter feeds: