Following are a few pages from the sketchbook, doodled over coffee while reading the morning paper. These are all based on photos from today's New York Times. 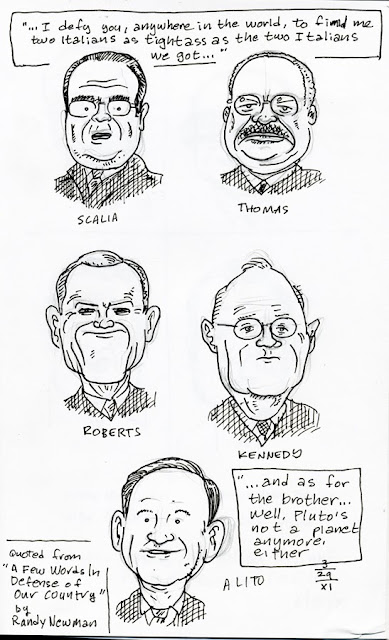 The images of the Supreme Court justices reminded me of Randy Newman's 2010 album, Harps and Angels, and I included a quote from the tune "A Few Words in Defense of Our Country." 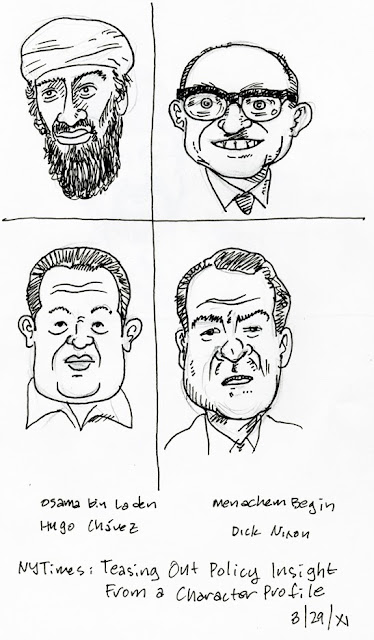 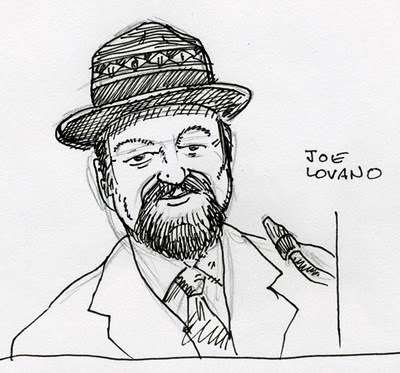 The Joe Lovano sketch was based on an ad for one of his upcoming appearances. A few years ago, I had the pleasure of meeting and hanging out with Mr Lovano here in Pittsburgh, when he played at a concert where I volunteer as stage manager. The two of us briefly crashed a wedding reception during intermission.
1 comment:

The venerable Pittsburgh City Paper just hit the twenty-year mark. I've worked with a lot of great people there over the years, and was pleased to see some of my older pieces featured in their special commemorative magazine.

Here's a clipping with commentary: 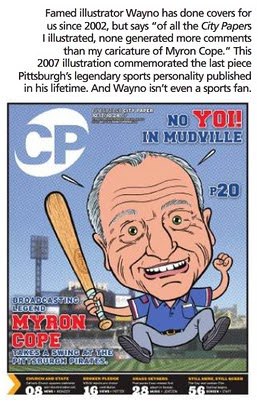 You don't have to be a sports fan to appreciate a beloved local character like Cope!
No comments:

Here's my latest Bizarro joke, as rendered by the lovely and talented Dan Piraro:

There's not a lot of "process" to discuss for this one. It's just a simple bit of wordplay. Once the phrase was in place, it wasn't too difficult to set the scene. Dan's final art followed my sketch pretty closely, with no changes to the text.

The biggest surprise was that the syndicate ran the comic at all, since sex is an uncommon topic on the funny pages.

Stay tuned for more laffs from Dan and me. Right now we have at least four in the pipeline: April 3, April 8, a special IRS gag on April 15, and a splashy Sunday spread on May 1.

All on a Summer's Day

I'm getting started on a painting of Lewis Carroll's White Rabbit character. The finished piece will be displayed and auctioned in conjunction with the Pittsburgh Symphony's upcoming performances of David Del Tredici's Final Alice.The composer says:


"Final Alice" is a series of elaborate arias, interspersed and separated by dramatic episodes from the last two chapters of Alice's Adventures in Wonderland, centering around the Trial in Wonderland (which gradually turns to pandemonium) and Alice's subsequent awakening and return to 'dull reality.'

The White Rabbit plays a major role in these chapters, and since 2011 is also the Chinese Year of the Rabbit, I selected this character as the subject of my painting.

Here's a preliminary study from my sketchbook: 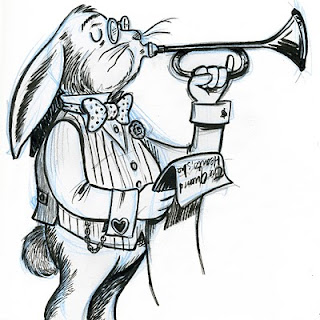 The actual painting will be a full head-to-foot portrait. The trumpet will probably be longer as well. It will be rendered in acrylic paint on 12" x 12" Masonite, my preferred format.

The auction, which will include works from ten artists, will benefit the Symphony and the ToonSeum.
No comments:

Last Friday's Bizarro wasn't the first time I used Mister Peanut in a comic. Here's a strip from 24 years ago (!) exploring the twisted psychology of humanized characters representing food products. 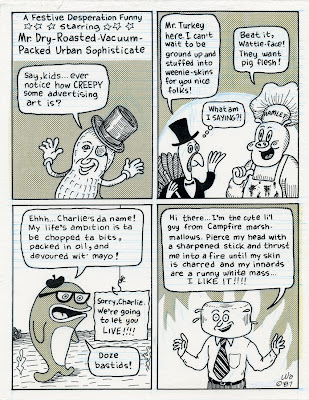 The most disturbing example might be Charlie the Tuna, who is still begging to be eaten after fifty years. I revisited this topic five years later, with this color piece in Hyena, a great comics anthology that was edited by my pal Mark Martin. 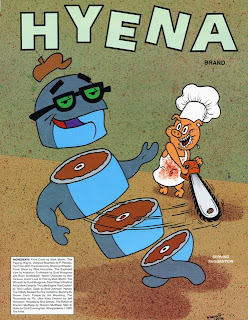 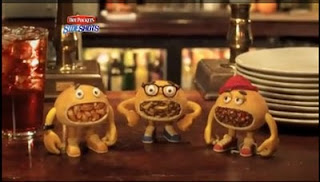 Today's Bizarro is the latest in an ever-growing pile of collaborative works I've done with Dan Piraro.

This one, much like another recent gag, started as a half-conscious doodle that struck me as a funny image. I couldn't think of any dialog for it, so after scanning the sketch, I dropped in a line of text below it as a placeholder, toying with the idea of running it as a caption contest. 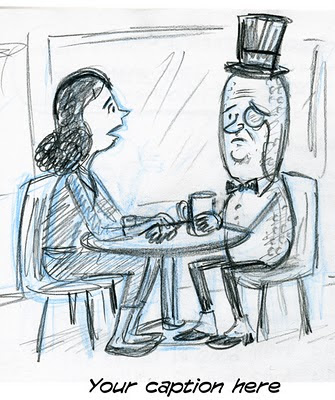 A few days later, I came up with a line where the female character is breaking up with her leguminous boyfriend: It's not you, it's my allergies.


Dan and I both liked it, but he did some additional research that goaded me to take it a step further:

Just for kicks, I looked up peanut allergies in Wikipedia and saw that they give epinephrine to people with extreme allergies who go into anaphylactic shock. Maybe there is a way to take the gag one step further, mentioning the drug? Sometimes leaving something simple is better, but I'm always looking for ways to alienate half my readership.

That reference provided the extra punch that the final comic needed. 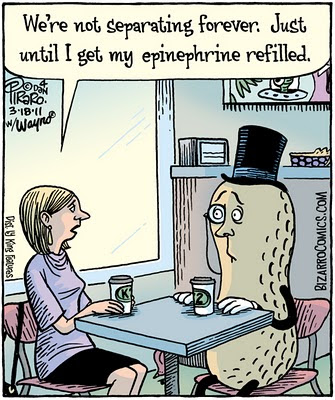 As a trivial tidbit, I'll mention that I colored Dan's art for this piece. As described in my prevous post, I've started doing the digital color on the daily Bizarros, so if anything looks wrong Monday through Saturday, it's not his fault.


Sheriff Dan and I have some other ventures planned, including a joint art show in early 2012. You'll hear about it here first. Or maybe here. Possibly here.


Also, it looks like I'll be writing material for another very funny cartoonist. We're still talking things over, and I'll blab about it as soon as it's a definite "go."

Since you're probably killing time at the office, you might enjoy browsing my little online store.


As always, you can check out the history of the Piraro-Wayno partnership by clicking on the Bizarro label.

In addition to writing the occasional gag for Dan Piraro's comic Bizarro, I recently started assisting him by taking on the duties of coloring the dailies (Monday through Saturday).

I've completed four weeks so far, and should be starting on the fifth week in a day or two. Dan does the art several weeks ahead of publication, so the comics I colored just started appearing. The first week's results are sprinkled through this post. 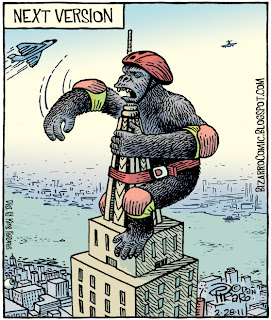 It's turning out to be a challenging but rewarding learning process. In late January, I spent a couple of days looking over Dan's shoulder, understanding the details of the syndicate's file formatting requirements, and absorbing as much as I could of his unique visual vocabulary. 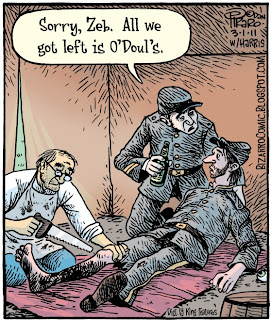 I've long admired his color work, which is unlike anything else on the comics pages. He colors his cartoons like a classically-trained painter to achieve a subtle, moody look. My usual digital coloring technique owes more to 1940s cel animation, with a bit of texture in the backgrounds and bright, flat colors on the characters, so studying Dan's style has been a welcome stretch for me. 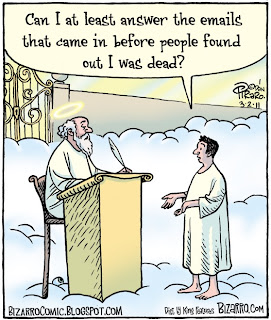 Like just about every cartoonist in the world, Dan and I both dabble in music, and adding color to his work feels a lot like learning music written by another band member, and playing a creative but supporting role, while honoring their intent as an originator. 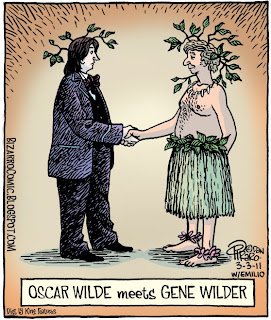 Naturally, as I stumble through the early stages of this new project, Dan has to tweak my first stab at most of the panels. This usually involves toning down areas where I've chosen oversaturated colors, or simplifying places where I used multiples colors when a limited palette was the more effective choice. Overall, we're making good progress, and developing a smooth system for efficiently getting the work done. 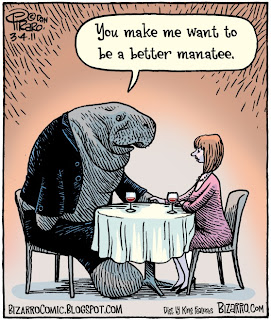 In recent weeks, I've colored a couple of comics featuring gags that I wrote. In those cases, I experienced the visual equivalent of a screaming feedback loop, watching the ideas bounce back and forth, progressing from concept sketch to finished grayscale art, and then from preliminary to final color images. I will, of course, post these multilevel collaborations as soon as they're officially published. 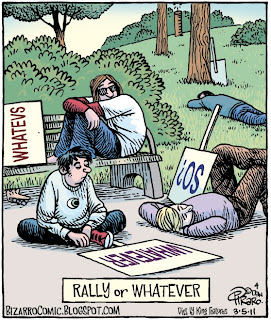 It's been nearly two years (!) since my first gag for Bizarro appeared, and thus far Dan has reviewed many dozens of my half-baked ideas without clawing out his own eyeballs, and I've developed a healthy tolerance for cigar smoke and Scotch. So, I think we're both benefiting from the ongoing collaboration.

As always, tune in here for breaking news.