The idea came from Foster, one of my own feline studio assistants, who can be persistent and persuasive when he's ready for some affection. Below is my submission drawing, which isn't too far off from Hilary's final gag.

I worked out the idea with some sketchbook roughs, which aren't staged as economically as the eventual strip, but have a certain appeal in their own right. 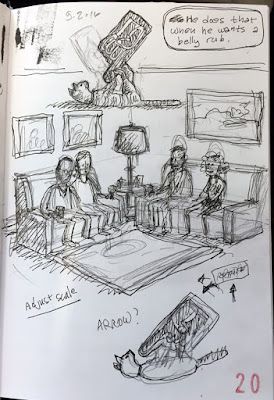 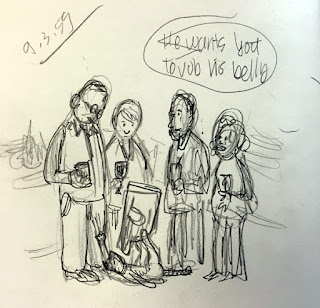 I can't take any credit for the idea of the cat pulling on a pant leg to demand attention. That's Foster's concept.

If you liked today's cartoon, perhaps you'd care to browse through my other collaborations with Hilary Price. They're all archived for your reading pleasure.

Finally, to give credit where it's due, here's a candid shot of my studio assistant taking a break while I practice the ukulele. 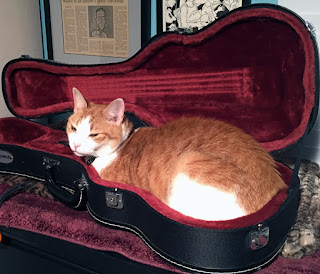 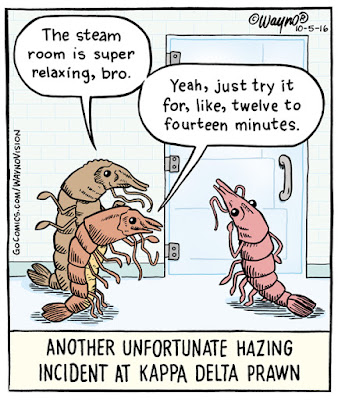 Today's WaynoVision cartoon was started almost five years ago. I submitted an early version to Dan Piraro as a possible Bizarro panel.
Dan rejected it, and I filed it away, later submitting it to Hilary Price for Rhymes with Orange. Hilary also passed on it, in part because of the implausible premise of human beings speaking to a giant lobster. I had to agree that there was no grounding in reality as a starting point for the joke.

I archived the image in a "failed ideas" folder and forgot about it until June of this year. I started to redraw the cartoon, but realized that I hated it before completing a penciled version. 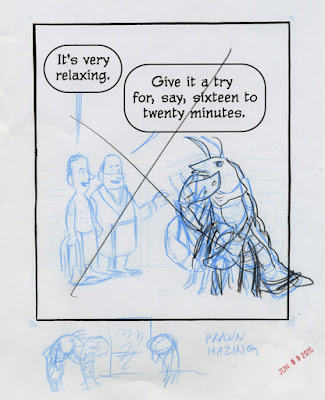 After abandoning this new sketch, I tried to devise another way to use the idea of a lobster (or maybe a shrimp or crawfish) being tricked into entering a steam room. The decision to replace the people with animals brought to mind a fraternity initiation. The unsettling thought of two creatures leading one of their own to its doom felt like a perfect opportunity to use these crustacean stand-ins to comment on an unsavory aspect of human behavior. After scribbling the quick thumbnail at the bottom of the page above, I roughed out this drawing in my sketchbook. 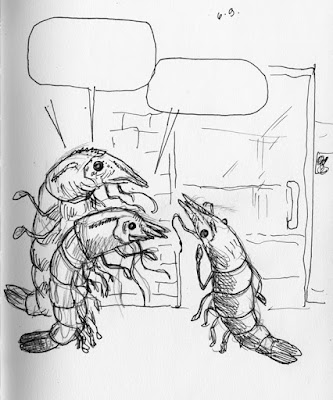 During my time assisting Dan Piraro as his colorist (2011-2014), I paid particular attention to his realistic drawings of animals and insects. An accurate rendering provides a sharp contrast to unnatural behavior in a gag, and can give a cartoon extra punch. When animals appear in my cartoons, I generally try to make them lifelike, to the best of my artistic ability.

College fraternities provide plenty of material for comment, and have inspired me in the past. Putting aside meritless elitism, what I find most baffling about fraternity culture is the notion of humiliating, beating, torturing (and sometimes killing) people as a test to become "friends."

Initially, the cartoon had a slightly different caption. 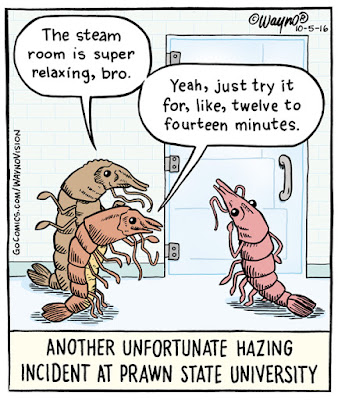 The "unfortunate incident" wording reflects the way horrific events are often downplayed by apologists, but "Prawn State University" could be interpreted as a reference to a particular school. That was not my intention, as despicable fratboy shenanigans occur everywhere.

Changing the name to the "Kappa Delta Prawn" made it more universal, and produced a satisfying sound in the mind's ear. (You must admit, the word "prawn" sounds funny on its own.)

I'm pleased with the way this one finally turned out, and owe thanks to my colleagues Dan and Hilary for rejecting it in its earlier incarnation.

This is an appropriate place to quote Jay Kennedy (1956-2007), a champion of cartoons, and a friend and mentor to countless cartoonists:

[I]n the fine arts, artists generally comment on the world only obliquely; and sadly, only those people who have the leisure to study art history can fully appreciate their comments. By contrast, cartoons are an art form accessible to all people. They can simply laugh at the jokes or look beyond them to see the artist’s view of the world. Cartoons are multi-leveled art accessible to everyone at whatever level they choose to enjoy.

I hope that today’s cartoon is one that can function on the multiple levels Jay described so eloquently.

Thanks for reading, at whatever level you choose.
No comments: