Anyone who's shown up for an event in inappropriate attire (i.e. most Americans) will relate to today's Bizarro comic. 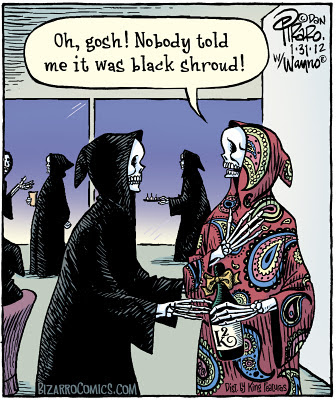 The submission sketch for this one was very sketchy indeed. Dan Piraro's finished art includes a wonderfully elaborate paisley pattern on the Casual Reaper's shroud, which posed a bit of a challenge for the colorist. Also, it's no small achievement to draw skulls with recognizable facial expressions.

Our next collaborative comic will appear on Saturday, February 4, and the eighty-odd prior ones are all stored in this blog's Bizarro archive.

"Gung Hay Fat Choy" is the traditional greeting for Chinese New Year. I've seen it translated as "Congratulations and Be Prosperous," which is as decent a greeting as any.
During a busy quarter in late 2003, I missed my chance to design a Christmas mailing for my illustration clients. My wife suggested that I wait until January and send a Chinese New Year card instead. I quite liked that idea, figuring that a card arriving in January of February had a greater chance of being seen than one delivered during the December greetings onslaught.

We've celebrated Chinese New Year for many years, usually by organizing a group dinner with friends. We enjoy having an extra holiday in the dead of winter; particularly one which carries no familial obligations. The Chinese zodiac theme was already part of my vocabulary, and I was enthused to get started.

Once I completed that first card (for the Year of the Monkey), my obsessive nature forced me to continue annually, in order to complete all twelve signs of the Chinese zodiac. I'll send out the last postcard in this series in 2015.

Here's hoping you have a healthy and prosperous year. 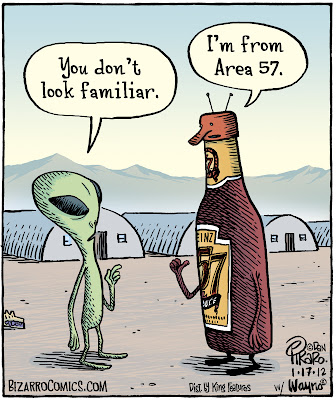 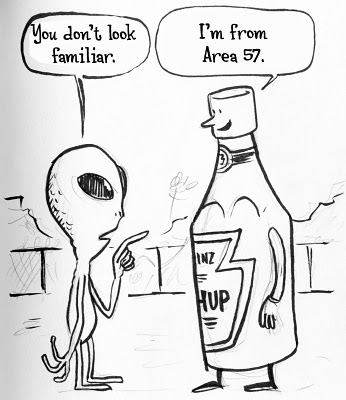 
Our previous collaborations are archived here under the Bizarro label. We've cooked up two new panels, which will appear in a couple of weeks, including a rare (for me) sports-related gag.
•••
By the way, Heinz products don't really come from outer space. They originate in my hometown, Pittsburgh, PA. In my elementary school days, the highlight of the year was a field trip to the Heinz plant. At the end of the tour, we'd receive a small gift box containing a couple of sample size products, and the highly-prized Heinz pickle pin. 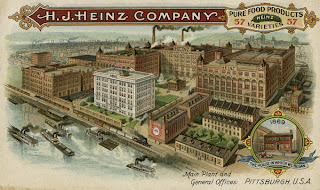 Here's a phantasmagorical Bizarro cartoon for your enjoyment, or perhaps puzzlement, as the case may be: 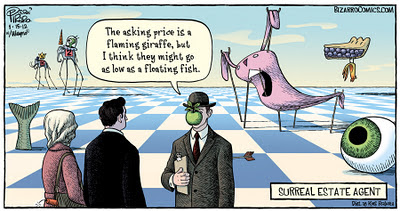 And, here's the submission sketch: 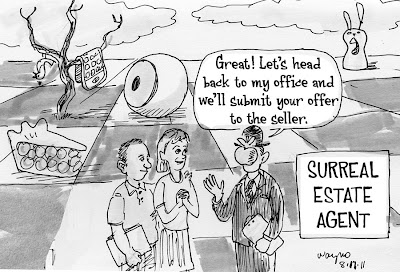 Bizarro's creator, Dan Piraro, improved on the sketch in several ways. His revised text does a much better job of setting up the punchline in the caption box. As is often the case, this one was written backward, starting with the caption and then laboring to develop an image and text to tee it up. My original dialog conveys the idea that the couple is interested in buying the Daliesque property, but Dan's final text includes appropriately surreal prices as well. Viewing the drawings together, it becomes apparent that the size and position of the caption in Dan's version neatly delay the payoff for a heartbeat.

The "surrealtor" is based on René Magritte's iconic painting, The Son on Man, an image that pops up regularly in New Yorker cartoons. I used this same character as a comic springboard in an earlier cartoon.

As a final masterstroke, Dan added the shrouded figure on the left, referencing another Magritte work, The Lovers. This not only reinforces the gag, but ups the otherworldliness of the drawing, and makes for a funny little reward to interested readers.

The sketch presented a good, funny idea, but definitely needed some refinement. Dan's revisions, particularly the new dialog, added more layers to the joke, turning it from a merely amusing biscuit into a rich, buttery, comedic croissant.

We'll be back with a new collaborative gag on Tuesday January 17, one which may have some extra appeal to my hometown readers.

If you've got time to kill, please feel free to browse our previous joint efforts here, or follow my occasional Twitterations.

• • •
Update: Dan just posted this cartoon on his blog, and included multiple links to surrealist works referenced in the panel. Go take a look!
2 comments:

Here's a brand new Bizarro gag for your mid-winter enjoyment: 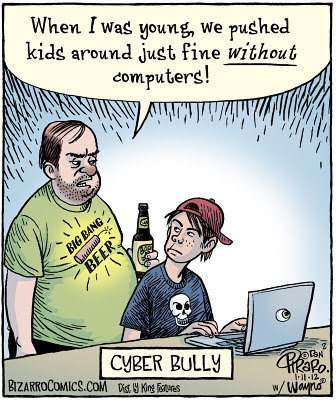 For comparison, here's the sketch I submitted: 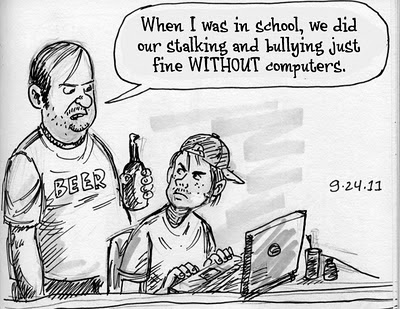 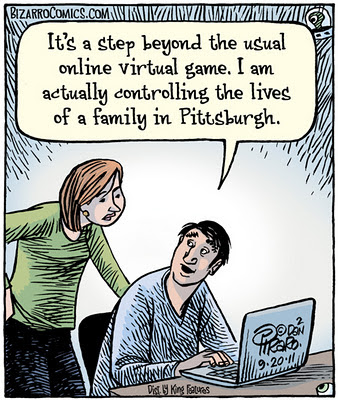 Dan tightened up the father's dialog a bit, and added the Cyber Bully caption box. The resulting comic is more effective, and more realistic, for a couple of reasons: the father in my sketch was a little too articulate, and, it's unlikely that a bully would ever use the word "bully" to describe his actions.

The underlying truth in this gag is, of course, that an awful lot of human interaction is learned behavior, influenced by the family, for good or ill. I hope that we've added a note of sweet justice by indicating that this kid will grow up to be a slovenly, unkempt lowlife just like his old man. Not that there aren't plenty of bullies in tailored suits and neatly-combed hair-helmets.

As an antidote to today's depressing topic, we've got a couple of silly comics coming up on Sunday, January 15, and Tuesday, the 17th.

Until then, I encourage you to browse our previous joint efforts.
1 comment:

A Boy and His Dogboy

I'm happy to report that Bizarro has survived my recent temporary takeover. My sincere thanks go out to everyone who sent me comments on the comics, and again, to Dan Piraro for allowing me to show my work in his space. I'll probably wait a week or two before I propose another one.

Meanwhile, here's our latest collaboration, a pop culture mashup that uses a verbal trick I refer to as a streptonym. 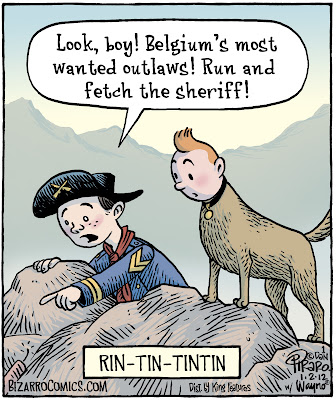 Dan's art for this one follows the submission sketch very closely, which is gratifying, as it tells me that he was happy with the staging and design. 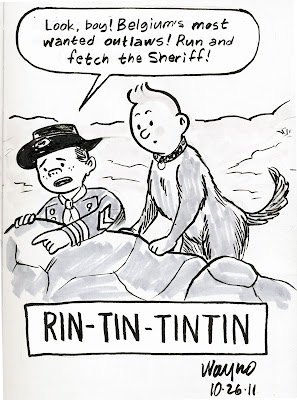 Just a few months back, this gag would have been incomprehensible to most readers. Now, the name Tintin will (at least) be familiar, thanks to a new film introducing the 80-year old character to American audiences.

We've got many more new yuks lined up for you in 2012. All of our previous joint efforts are viewable under this blog's Bizarro label.
No comments:

Today we wrap up my second run as Bizarro's guest cartoonist, with one man's vision of hell, and imagined by yours truly. 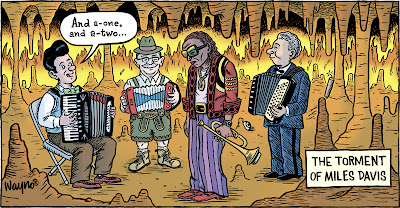 I send you my best wishes for a Happy New Year, along with sincere thanks for following along on this experiment. Special thanks go to Dan Piraro for allowing me to show my work in his spot.

Let's see what sort of mischief we can get into this year, shall we?

We now return control of Bizarro to its creator.