Wayno Rhymes with What?

Today, I'm pleased to showcase my first collaboration with Hilary Price, for her daily comic strip, Rhymes With Orange:

For comparison, here's my original submission. 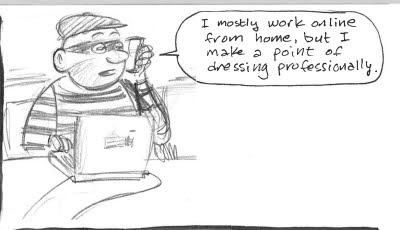 My idea was to show a stereotypical burglar with the traditional (but inexplicable) get-up of newsboy cap, striped jersey, raccoon mask and stubble. Hilary instead depicts a bank-robber, complete with  ski-mask, gun and a bulging sack of money (Hey, where's the big dollar sign on the bag?) Come to think of it, a bank robber actually could do his work online.

Hilary's been doing RWO since 1995, and in 2007 she won the National Cartoonists Society's Reuben Award for Best Newspaper Panel.

I'm very pleased to begin a working relationship with Hilary, and I look forward to many more collaborations in the future.
2 comments:

Off With My Head!

I made this new painting for The Pittsburgh Symphony's upcoming performance of David Del Tredici's Final Alice.

Ten Pittsburgh artists contributed works to be displayed in the music hall. The pieces will be auctioned, with the proceeds split between educational programs sponsored by the Symphony and the ToonSeum.
1 comment:

A Poke in the Eye

Today's Bizarro takes yet another poke at Facebook, which is proving to be a rich source of inspiration. I've been told that some of our gags are rather obscure, but at least 500 million people should get this one. 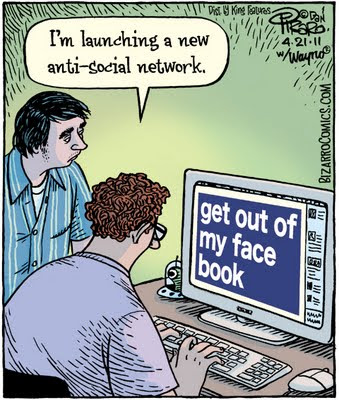 I gave Dan little to work with visually—just the wordplay, really. But as usual he ran with it and created a great image punch up the gag. 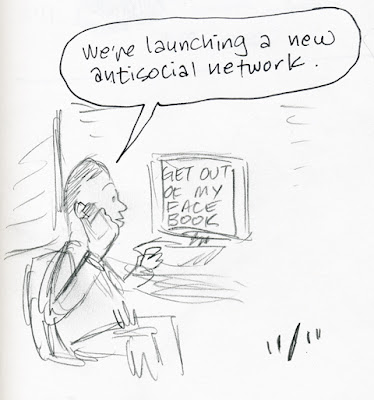 Since there's not much else to discuss, here's a look at the alternate layout for papers that run Bizarro in comic-strip format:

As I may have mentioned before, Dan creates two versions of the comic every day: one for the normal panel and a second "landscape" version. This often requires some additional art to fill in the space, as seen in this one. It's just another example of the hard work that goes into creating the high quality humor you expect from Bizarro.

To view the archive of Piraro/Wayno collaborations, click on the Bizarro label.

Coming up in early May: Two new comics in a row, and a special announcement.
1 comment:

Today's Bizarro pokes fun at an old favorite cartoon character faced with the reality of 21st Century automation. It is 2011 after all, and TV led us to expect floating vehicles that collapse into briefcases, beds that pop us out like slices of toast, and wisecracking anthropomorphic domestic help. Instead, the state of housecleaning technology is a slow-moving, overgrown hockey puck. 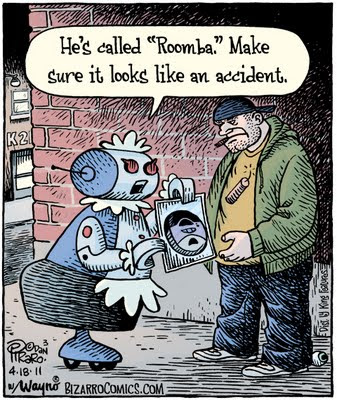 My sketch had the dialog nailed down, but the drawing showed Rosie hiring  an old-school pinstripe-wearing gangster, who Dan Piraro replaced with a slightly updated thug. Actually, he reminds me of a crook from "Car 54" dressed up in modern "street" gear. 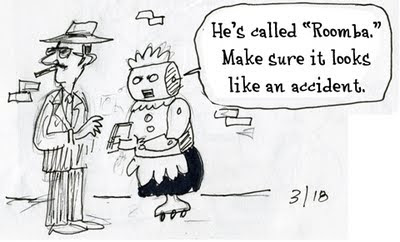 An earlier sketch (below) showed Rosie drowning her sorrows as she lamented her replacement. This one seemed more sad than funny, so I did the other treatment with the scorned maid out for revenge. Giving her more of an angry edge improved the joke. 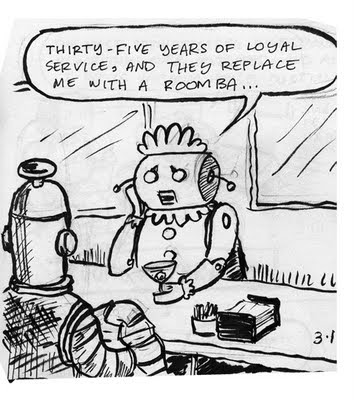 Our next collaborative gag will appear on Thursday. Until then, feel free to review our previous laffs here.

Put Your Hand Inside the Accountant's Head

Today, Dan Piraro and I celebrate the traditional income tax deadline day with a cartoon featuring a man and his trusty financial adviser. 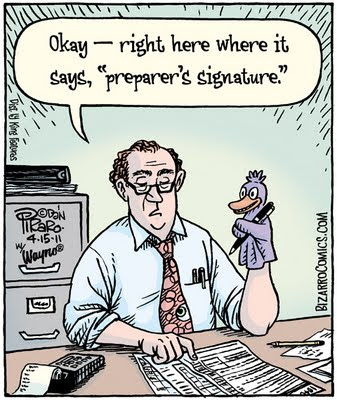 The final art is a huge improvement over my submission: 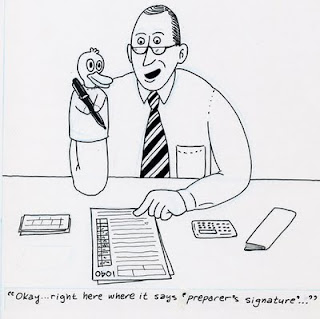 This sketch is quite old. The digital file has a creation date of 2003, making it at least eight years old, but I'd estimate it's from the late 1990s. It looks like I drew it with a Rapidograph pen, which I haven't used for many years, and there's a small piece of correction tape (!) on the caption. I held onto it for a long time, and am glad it's finally made it to print. There's something especially hilarious about hand puppets. I find them to be much funnier than ventriloquist dummies.

Our next collaboration will appear on Monday, April 18, with four more following closely. All of our previous efforts can be viewed here.

• • •
I've just started contributing gags to Hilary Price's comic strip, Rhymes With Orange. The first one will appear on Tuesday, April 26. RWO is a very funny cartoon, with a clever, absurdist point of view, and I'm happy about working with Hilary.

• • •
Getting back to Bizarro, keep your eyes peeled for an announcement about a special batch of cartoons coming up shortly. It'll appear in the usual places.

Also, Pittsburgh's own ToonSeum has just confirmed that Dan Piraro will bring his standup comedy to town on Thursday June 9, for the annual Comics for Comics fundraiser. Tickets will be available soon. Dan's live performances are unpredictable, visual, musical, and very, very funny.

In today's Bizarro comic, we goof on a couple of popular children's characters, one of which has a particularly off-putting name, blithely ignored by fans. 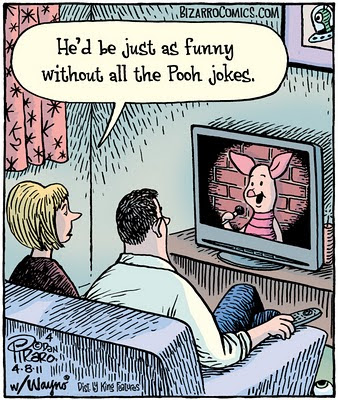 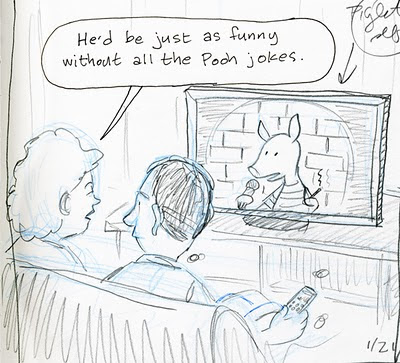 I also did a sketch showing a grizzled show-biz manager advising the would-be comedian to clean up his act: 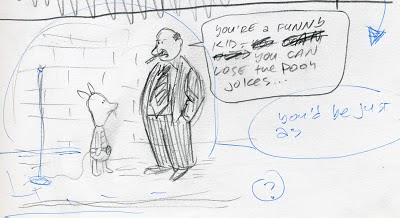 The scene with the couple watching TV works better, in part because it's a more realistic situation (except for the talking pig), but I do like the body language in the sketch with the manager.

The gag was inspired in part by the disturbing sight of a parent and child sitting in the aisle of a bookstore reading aloud from this horrifying volume: 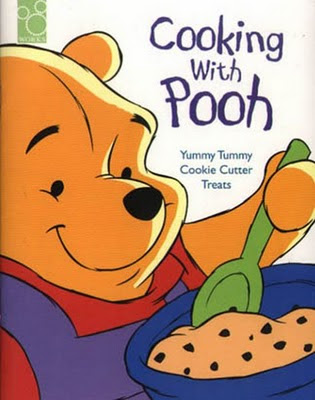 There's a fine line between cute and disgusting. Sometimes there's no line at all.

Wikipedia has an interesting description of the Piglet character, noting that he's "a very small animal with a stutter and a generally timid disposition, [who] often conquers his fears and seems to want to be brave." That's a fair description of quite a few stand-up comics.

For the statisticians in the audience, the Pooh gag marks my 25th appearance in Bizarro. There are many more to come, including a special Form 1040 bit next Friday, and something extra in late May.

Catch up on our previous collaborations here.
4 comments:

One in Half a Million

This Sunday's Bizarro (April 3, 2011) is a desert island gag, one of the oldest cliche situations in a cartoonist's bag of tricks. A Google image search for desert island cartoon returns over 500,000 results. 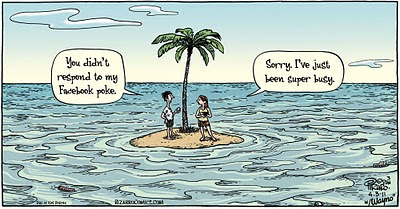 Other reliable devices include a patient on a psychiatrist's couch, a visit from the Grim Reaper, a person on a doctor's examination table, and in/out boxes on an office desk.

We've all used them, and will surely continue to do so. Nickelodeon Magazine (1993-2009) used to run a desert island gag in nearly every issue. I know I did one for them, but I can't find it. Maybe the bottle containing it will wash ashore someday.

My concept sketch was very simple, and the idea could have been conveyed with nothing more than stick figures. 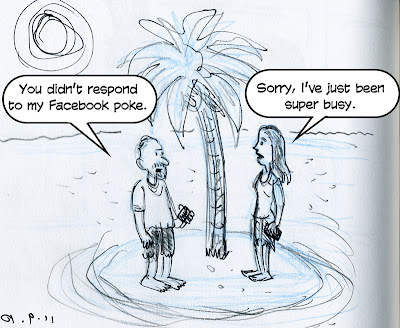 We tried several different lines before settling on the Facebook dialog. Earlier versions had a stunned/sad guy reacting as the woman said:

I've met someone else,

We should see other people, or

I need my space.

I like the final version, which adds a comment on technology-based communication replacing actual conversation, an idea we've touched on before.

Dan's commentary on the same strip can be seen at his blog.

Dan did a beautiful job of exploiting the extra space available in a Sunday page, placing the tiny island in an expanse of sea and sky. His waves are hypnotic, and I'll bet that drawing them was mind-clearing and therapeutic.

I don't know how the characters keep their phones charged. Perhaps the batteries run on the magic of comic-strip absurdity.

We have several more joint ventures in the pipeline over the next month, and beyond. Stay tuned, and enjoy our previous efforts here.
No comments: