Today's Bizarro comic introduces a condition that hasn't yet appeared in the American Psychiatric Association's Diagnostic and Statistical Manual of Mental Disorders, but will surely make it into the next edition. 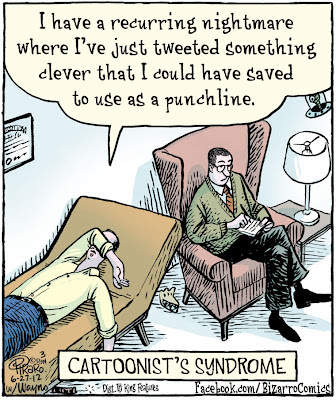 My original sketchbook scribble of this idea was a little too rough to submit. Of course, nothing's too crappy to fill up space on a blog post. 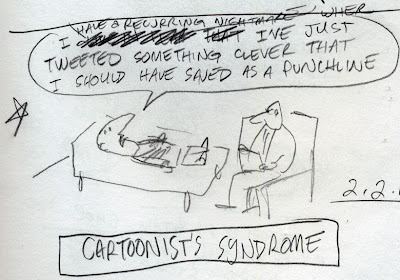 Although one could say this doodle has a certain primitive charm, I wanted to convince a big-time cartoonist that the gag would work in his comic, so, I stole repurposed the art from one of Dan Piraro's previous patient/psychiatrist gags, and digitally manipulated it to look exactly like an actual Bizarro panel. 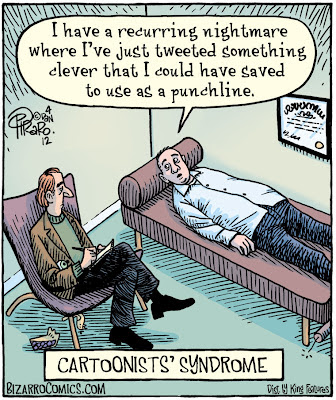 This devious ruse did the trick, and Dan decided to use the gag. I just noticed that the distraught patient in the published version bears a slight resemblance to Mister Piraro, or at least he's sporting similar facial hair. However, it would be odd to see Dan in such a bland shirt.

Two more of my gags will appear in Bizarro on July 2 and July 8, and, unlike the most recent two, neither has anything to do with Twitter. As always, the entire history of my collaborations with Master P are viewable in this blog's Bizarro Archive.
No comments:

Today's Bizarro cartoon adds a nautical twist to a riff on the pervasiveness of Twitter: 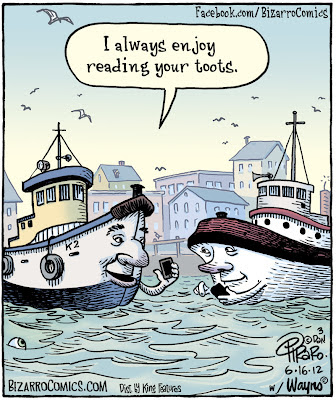 Here's the minimalist sketch I submitted to Dan Piraro for consideration: 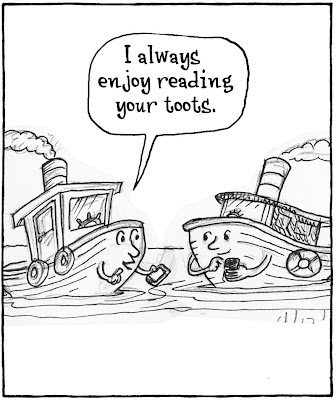 I have absolutely no recollection of the development of today's gag. It was one of the very rare occasions where the idea seems to have arrived in its complete and final form. I can't imagine any reason I'd be thinking about what it would be called if tugboats were sentient and used Twitter. There must have been something that suggested the connection, and I suppose my subconscious chewed on the idea and pushed it through the chute to a sketchbook page. Although it's a simple joke, I quite like the cartoon--it's quick and surprising. Besides, "toot" is a funny word.

My next Bizarro gag will appear on June 27. Oddly enough, it's also a commentary on Twitter. Maybe I should get out more.