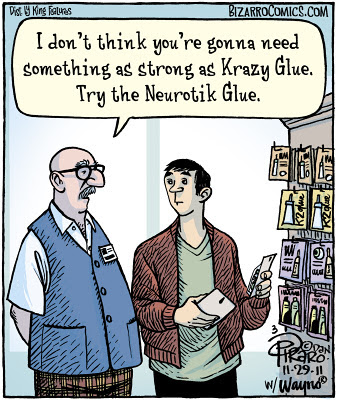 I submitted two versions of this idea to Bizarro's kreator, Dan Piraro. 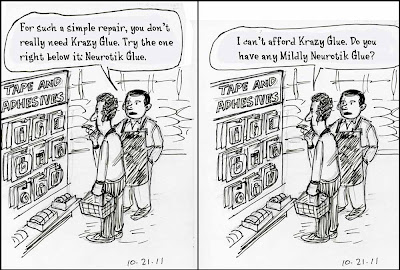 Dan chose the one with the salesman speaking, and re-staged the image, zooming in on the characters and the hardware display. He also edited and streamlined the dialog, greatly improving the gag's rhythm and impact.

The sketch relies on the customer's chin-scratching gesture to indicate his confusion, while Dan's final art elegantly gets the idea across by showing him holding two products while looking to the salesman for guidance. By the way, I find myself in a similar situation at the local hardware store just about every weekend.

The idea for this gag arose from a conversation with friends at a recent "event" dinner. We were discussing a household repair, and someone mentioned seeing this recent Krazy Glue commercial. I joked that since I wasn't bungee jumping, Krazy Glue seemed a little extreme, and I probably just needed a slightly disturbed adhesive. Fortunately, I scribbled the idea on a losing raffle ticket, stuck it in my pocket, and made the sketches a couple of days later.

While assembling this post, I found a blog showing the ad's storyboards, which were created by an artist named Chris Kawagiwa. His storyboard work is very good, and his personal comics/illustration work is even better.

My next collaborative comic with the rockin' Mr. Piraro will appear on Thursday, December 1, with two more in the pipeline for the following week. All of our previous two-man comics are archived under the Bizarro label.

And, don't forget, there are now just 26 shopping days until the start of my second deployment as Bizarro's guest cartoonist. The invasion begins on Boxing Day 2011 (December 26).
1 comment:

Your Pets at Work

Today, we present two recent Bizarro gags showing domestic animals on the job. First up, from Friday, November 25, is a dutiful dog: 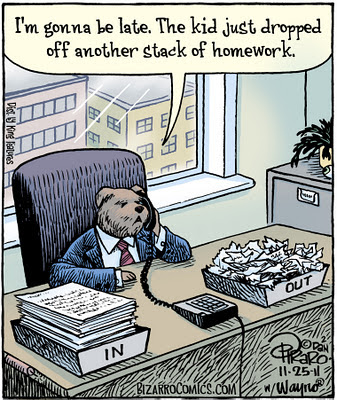 The joke of course refers to the schoolboy's standby excuse, "My dog ate my homework."

My submission sketch was very different, and in fact, resulted in the a second cartoon in addition to the one above cartoon. Showing it now would spoil the upcoming cartoon, so here's a redacted version as a small consolation to loyal readers. 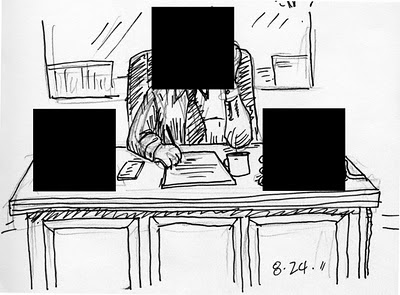 •••
Following close on the dog's heels are a couple of local news hounds, or, more accurately, news cats: 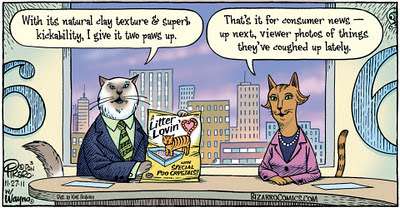 The final art follows my sketch's general layout (below). As I often point out, the published cartoons are true collaborations. In this comic, the dialog in the second bubble was added by Bizarro's creator Dan Piraro, and it adds a lot to the gag. 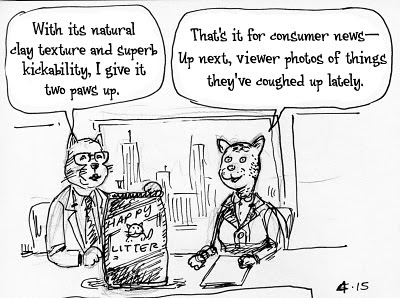 Our next joint efforts will appear on Tuesday, November 29 and Thursday, December 1.

I'm also pleased to announce that my second stint as Bizarro's guest cartoonist will begin on Monday December 26, and will wind up on New Year's Day 2012.


If you'd like to revisit our earlier collaborations, they're archived here in the blog under the Bizarro label.
3 comments: 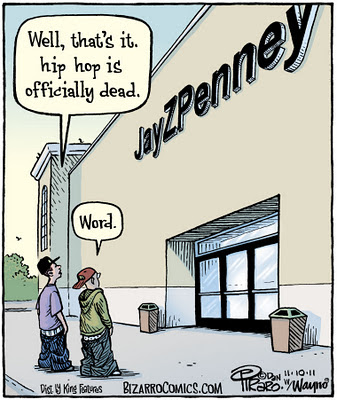 Had we referenced a rock musician, this comic might be seen as a depiction of an artist selling out, but in this case selling down might be a more appropriate phrase. It's not so much a comment on this specific rapper, producer, entrepreneur, and conspicuous consumer/endorser as simply an opportunity to make a satisfying pun.

These posts always include my submission sketch, but this one barely qualifies. 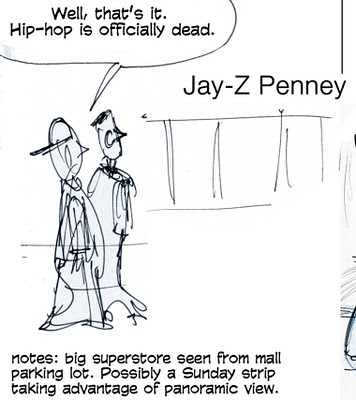 The rough is little more than a verbal description of the concept. Once again, the talented Mister Piraro fleshed it out and created a stunning visual to deliver the joke. The second talk bubble was a masterful addition. It's the perfect, deadpan rimshot, punctuating the joke. Also, his hand-lettered signage looks exactly like an actual Penney's storefront, further enhancing the gag.

We have several more collaborative cartoons lined up for the end of the month. Meanwhile, you can always review our previous joint efforts in this blog's Bizarro Archive.

My second week-long stint as Bizarro guest cartoonist will be announced soon.

Oh, and one more thing: please pull up your trousers.
1 comment:

Some recent selections from the current sketchbook: 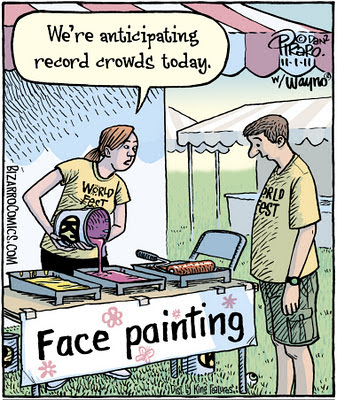 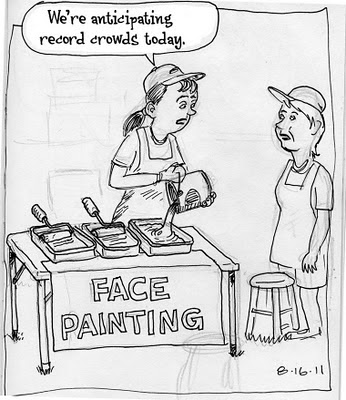 Today's a busy work day, so these are presented without commentary. Enjoy!
1 comment: