An Endangered Species Walks Into a Bar... 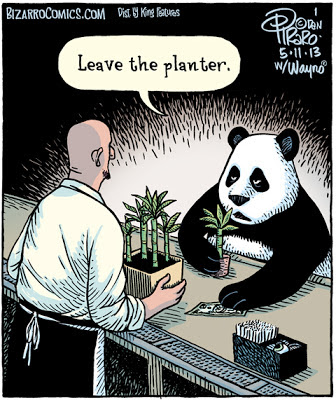 When a director wants to tell the audience that a character is at the end of his rope, and is planning to get stinking drunk, the standard scenario is to show him ordering a whiskey, adding, "leave the bottle."

Here's the sketch I submitted to Dan Piraro for consideration. 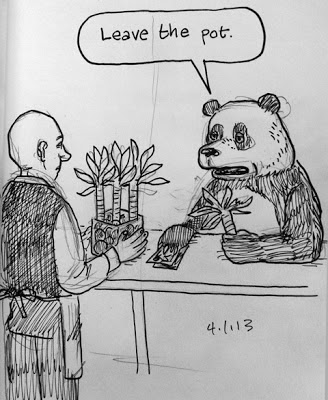 This was one of those rare gags that hit me immediately, and I was pretty sure it would be a winner, so instead of doing a proper scan and cleaning up the image, I simply snapped a photo of the sketchbook page with my phone and sent it as-is, with visible pencil lines and poor lighting. Dan liked it as much as I did, but we thought the word "pot" could create some confusion. We didn't want readers on either side of that issue to think there was some secret message about marijuana in the cartoon. We have no agenda here other than producing a laugh. We agreed that the word "vase" didn't quite work, and finally settled on "planter," which maintains the syllabic rhythm of the word "bottle."

We do realize that bamboo isn't an intoxicant for pandas, so the transference doesn't hold one hundred percent. However, it is a fact that since bamboo has very few nutrients, pandas who live on it have to eat it in large quantities, so there is a scientific basis for the cartoon.

This gag marks a new milestone: it's the 125th collaboration between Dan and me to appear in Bizarro. You can see all of our previous joint efforts in this blog's archive.
1 comment:

This Sunday's Bizarro is another fine example of Dan Piraro's wonderful comic art. 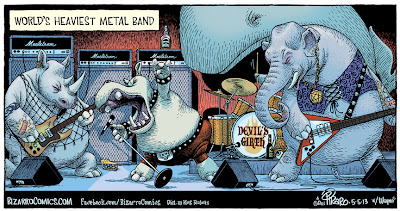 As I've noted before, Dan pulls out all the stops on his Sunday panels. Just check out this Dan McConnell Sunday gag.

My submission sketch was laid out for the "portrait" orientation of a daily panel. 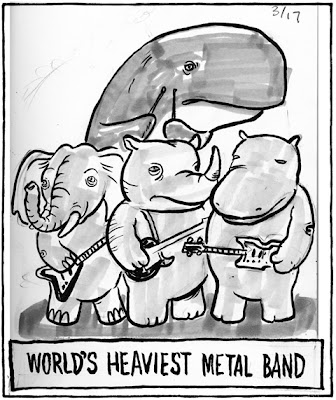 In a ploy to make the gag more appealing to Dan, I intentionally drew the animals in a static, posed arrangement, rather than depicting them onstage. He's mentioned to me in the past (and I know from firsthand experience) what a pain it can be to draw cartoon musical instruments. especially guitars. I guess his enjoyment in drawing hippos, rhinos, elephants and whales won out, resulting in a spectacular cartoon image. You can almost hear the ultra-low frequency riffs coming from the steel-reinforced stage.

As always, every one of our joint efforts is viewable in the Bizarro Archive. Have fun browsing, and don't bang your head.

•••
Speaking of cartoons and music, exactly three weeks from today, my musical group, The Chalk Outlines, will perform at the closing party for the National Cartoonists Society's 67th annual Reuben Awards Weekend. 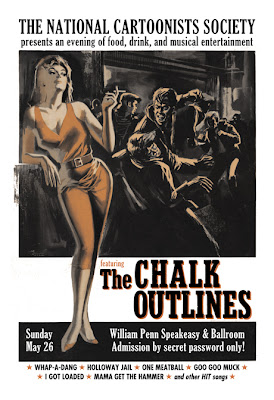 Our drummer, cartoonist Dave Klug, describes the band as "alt R&B," which is as good a description as any. We'd originally planned this group as a one-off, just for the NCS party, but we're having so much fun, we're going to keep it going, and are planning additional local gigs over the coming months.

The NCS has never held their big blowout in Pittsburgh before, so the local cartoonists are all abuzz. Several Pittsburghers are nominated for Divisional Awards this year: Mark Brewer, George Schill, Michael McParlane, Vince Dorse, Pat Lewis and John Manders, along with yours truly. It's going to be worth the conference fee of admission to see this gang wearing tuxedos.