It's Not Easy Being Green

Here's my third gag to appear in Hilary Price's multiple-award-winning Rhymes With Orange over the past month.

And, for those interested in the process, here's my submission sketch. 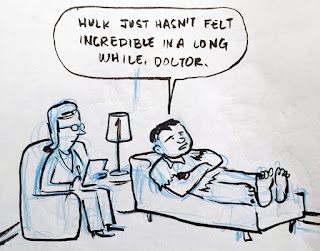 Hilary's version is pretty close to mine, though she changed the dialog from normal English to Hulk-speak. I like that revision, as well as the expression she put on his face.

I find comic book superheroes to be absolutely ridiculous, and have no interest in them other than as fodder for gags. The Hulk is a particularly tempting subject, in no small part because "The Incredible" is part of his name.

And let's not forget the fact that when he makes the transformation from skinny twerp Bruce Banner, quadrupling in size, his white shirt and purple pants stretch, but never to the point of shredding and falling away. They just enlarge right along with him.

Earlier this year, I commented on this character in my comics feature, WaynoVision.

I've been contributing the occasional gag to Rhymes With Orange since 2011. They can all be viewed in this blog's Orange Crate.