I don't know much about hunting, but I do know that there is a type of hunting dog called a pointer, which was enough to craft this gag: 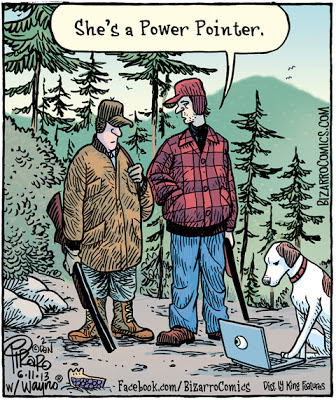 Dan Piraro's finished art closely follows the staging in my sketch, which is always a nice bit of affirmation. 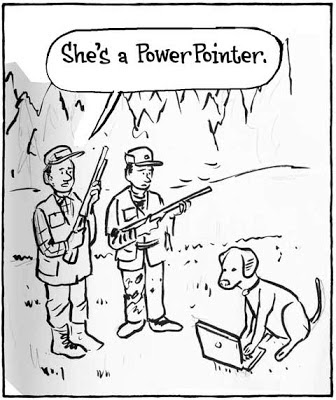 This is a gag that benefits from a realistic drawing of the animal character. A cartoonish dog using a laptop computer isn't very surprising, but a convincingly "real" dog in this absurd situation adds some logical contrast which gives the gag a little more punch.

Our many previous collaborations can all be viewed in this blog's Bizarro archive. Please drop by again for more of this kind of foolishness.
No comments:

Today's Bizarro is a gag that could almost be an actual occurrence for the caffeine-dependent among us (and I speak from experience). 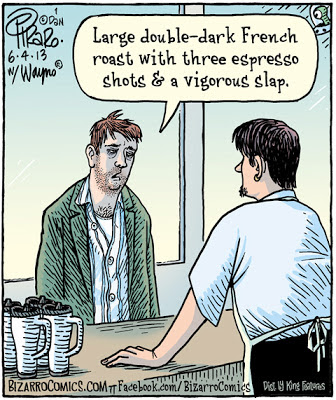 Here's the sketch as submitted. In Dan's version, at least the fiend put a raincoat on over his pajamas, instead of showing up in a bathrobe. 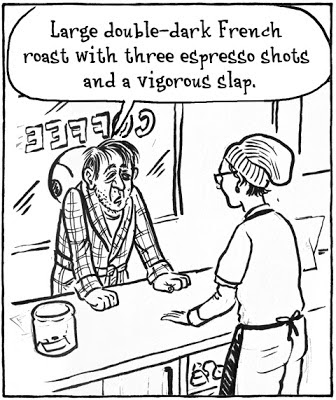 The event gave me a chance to catch up with many of my esteemed colleagues, including members of the Bizarro collective.
At the Sunday night farewell party, attendees were entertained, or in some cases annoyed, by the musical stylings of the Chalk Outlines, my side project with fellow cartoonist (and powerhouse drummer) Dave Klug, and good friends Hank Lawhead, Jeff Stringer and B.G. Mozart. If there's one thing I've learned from this experience, it's that excellent musicians can carry a moderately-talented vocalist.

Performing with these guys is a real privilege, and a lot of fun. We plan to keep it going on a casual basis for as long as we can convince someone to let us set up and bang away.

As always, you're invited to peruse the Bizarro archive to puzzle over our earlier collaborations. A new joint effort will appear on June 11.
1 comment: