A Mouse in Every Bowl

Today's Bizarro cartoon reminds us that it's still campaign season, and pandering to the crowds is the order of the day. 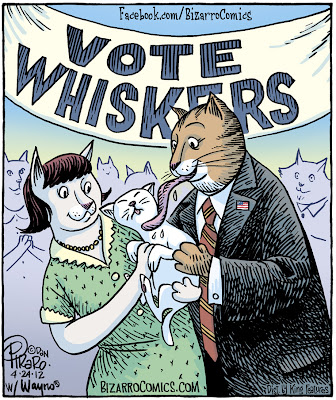 The humor here is fairly gentle, but I think it's a good gag. I was trying to pull it off with no text whatsoever, but the banner seemed to be required to make it clear that this was a campaign stop. The kitten's expression and body language in Dan's panel improved on the sketch quite a bit. He's captured a look of resigned reluctance that's absolutely terrific, whereas the sketch is rather cutesy, particularly those PJs.

Also, the position and posture of the other characters make more sense in the final art. It's clearer that the mother cat is holding the kitten, and the politician is leaning in for the photo opportunity.

The outlandishly long tongue on the campaigner was initially a bit of a surprise. Bizarro often features weird or absurd elements as part of the gag, with the humor arising from a character's blase reaction (or non-reaction) to something that's weirdly impossible, but I thought it looked silly. Perhaps Dan determined that the long tongue was necessary to avoid placing the politician's head close enough to actually lick the kitten, which might have made it look as if he were trying to topple both mother and child.

Although the final drawing of the politician is perhaps a little goofy, the sketch version now appears to be a bit too realistic, almost evil looking. Overall, the finished version is still a winner, and avoids descending into cuteness.

Speaking of the extremely talented and funny Dan Piraro, he'll be doing several  live performances later this week in celebration of Bizarro's 10,000th Anniversary (Since the feature began 25 years ago, he's produced over 10,000 daily cartoons!). There will be two shows in San Francisco on Thursday, April 26, which will also feature comedian and Bizarro contributor Michael Capozzola. These will be followed by appearances on Friday in Mill Valley, and a Saturday show at the Stumptown Comics Festival in Portland.

As always, you are encouraged to read our prior collaborations here.
1 comment:

Somebody's Had Too Much To Think

The Federal authorities have approved my latest beer label for the good folks at East End Brewing Company: 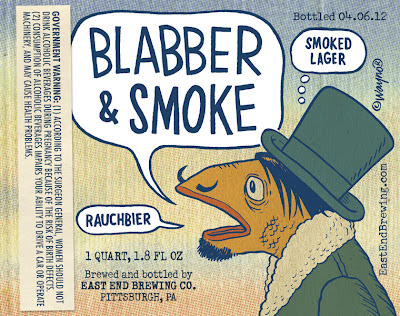 The recipe was developed by Brendan at EEBC, who bears some resemblance the the young Captain Beefheart, and as this is a smoked lager, they chose to name it after one of the Captain's songs (the actual title is Blabber 'n Smoke).

This design presented a bit of a challenge. I wanted to give it a feel similar to album art of the era without imitating it. I'm a lifelong fan of Cal Schenkel's amazing art, graphics, and design, which graced many Zappa/Mothers albums. Cal was also responsible for the iconic cover of Beefheart's Trout Mask Replica, a decidedly "difficult" double LP released in 1969. 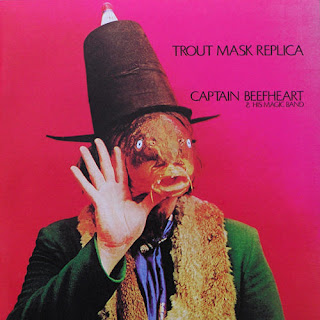 I first encountered Cal's art and design in this ad, which appeared in mainstream comic books in 1967: 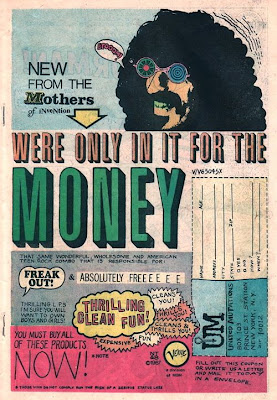 For our beer label, I made direct reference to a fish-headed figure in a hat, and tried to capture the feel of cheap printing on scruffy newsprint. I hope that I was successful in paying tribute to a major influence, while incorporating my own identity and style.

Following are thumbnails from the sketchbook, beginning with several scrapped ideas and a tiny version of what became the finished art. 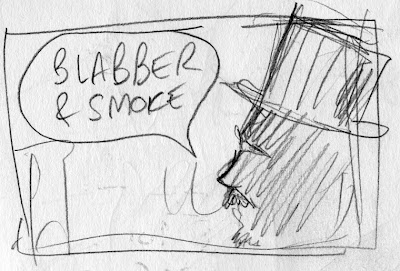 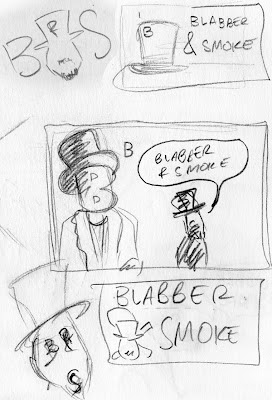 Many cartoonists also love Trout Mask Replica, often to the dismay of spouses, children and parents. Matt Groening often recommends it during public appearances, and Patrick McDonnell paid tribute to TRM with the title panel of his comic Mutts in December 2010.

The above-mentioned Mister Schenkel is a kind and gracious gentleman, who exhibits and sells art through his website, Galerie Ralf. His prices are very reasonable, and I recommend that you spend some time at the Galerie and order a giclée print or hand-painted original.
2 comments:

While I finish my third or fourth espresso of the morning, I sometimes make sketches based on photos in the newspaper. Here are a few recent ones.