It's still 2020, for better or for worse, but we're celebrating a milestone here at the studio, as your humble scribbler has started producing comics for the New Year. 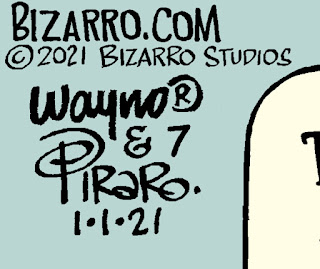 I recently uploaded a folder that includes the first gags of 2021. I paused for a moment to remind myself that it's the beginning of my fourth year as Bizarro's daily cartoonist. It continues to be the best gig I've ever had, and I plan to keep at it for the long haul, or until my last inking brush loses its bristles.

We have a surprise or two in store for next year, especially for readers who enjoy looking for the Secret Symbols each day. We'll have more to say about that in the coming months. 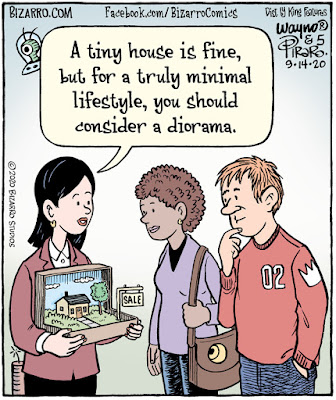 Storage can be an issue, and you can forget about the concept of personal space. 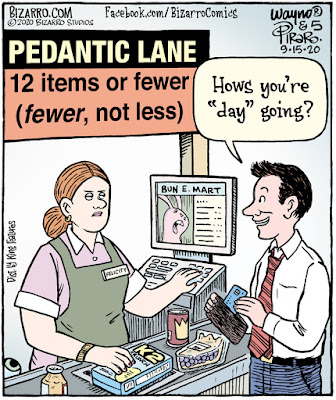 This meta gag was one of my favorites of the week, with the grumpy clerk apparently able to see the customer's talk bubble and read his mistakes.

Coincidentally, a few days before this cartoon was published, a tweet circulated, alleging that the Associated Press Stylebook had decided that "less" and "fewer" were now considered to be interchangeable. 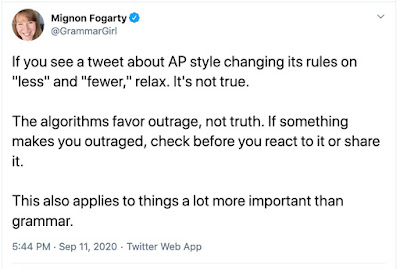 This bogus claim was refuted by Mignon Fogarty, popularly known as Grammar Girl, a highly reliable source, and the host of one of my favorite podcasts. 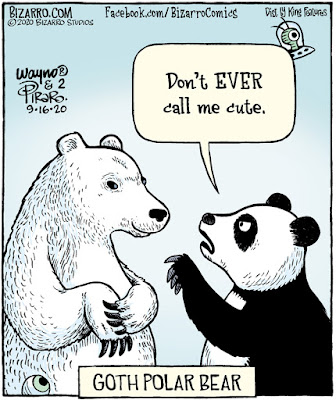 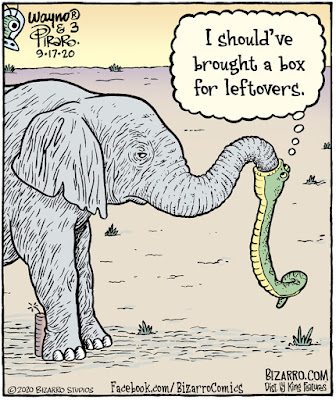 This is the Saharan Chihuahua Snake. Like its namesake canine, it perceives itself to be larger than it actually is. 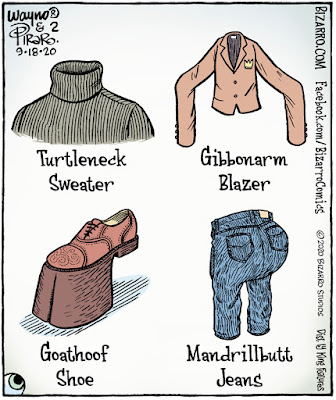 On Friday we indulged in some absurd extrapolation, imagining a few pieces of animal-themed clothing. 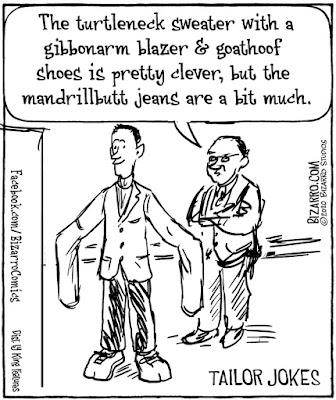 My first draft attempted to show a person wearing these items, but I found it ti be unnecessarily wordy, and not very funny. I think the final version is more direct and more effective. 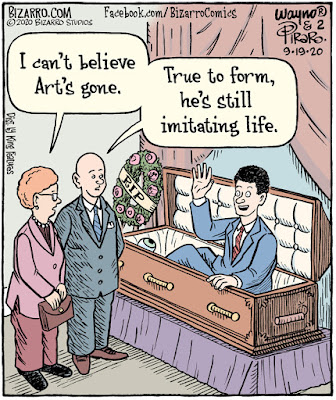 That's it for this batch. Be sure to visit Dan Piraro's blog to see what's in his thought balloon this week, and to view his latest Bizarro Sunday page. And don't forget to read the latest chapter in Dan's serial graphic novel Peyote Cowboy.

Note: Some YouTube videos are not available outside the US.

Wow! I was just listening to "Blonde on Blonde" in the car a few days ago! Coincidence? Synchronicity? Who knows? But I have always loved "Leopard-Skin Pillbox Hat"!

Anyone else think of the "hat" drawing from "The Little Prince" when they saw the snake and the elephant cartoon?

I most confess, as much as I love the album, I usually skip the first song.

Good call, @Drewdown. It has many snakey parallels!!
Except Wanyno's Boa's eyes are Chihuahua-super-sized and much bigger than it's stomach!

I like the Tuesday cashier's name. Made me smile.