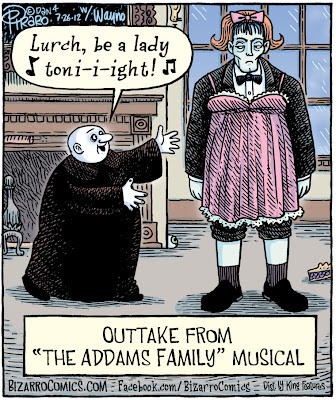 Although I usually avoid listening to friends' ideas for comics—I have plenty of my own waiting to find homes—this one, described by mad genius Jesse Schell grabbed my attention.

The cartoon work of Charles Addams served as an early introduction to darkness in humor, and as an oddball child, I read and re-read crumbling Pocket Books reprints of his cartoons. These disturbing and hilarious books predated my introductions to the early MAD paperbacks, the underground comix of the late 1960s, and, later, the groundbreaking National Lampoon.

Dan Piraro's published art follows my sketchbook version pretty closely, and we both paid our respects to Addams's style in our own ways. 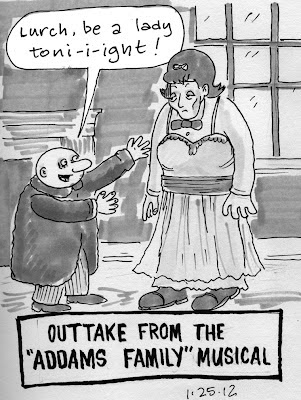 This one was particularly satisfying to color. A web search for covers of Addams books, which often featured lovely watercolor illustrations, provided color guidance, and we tried to be as faithful as possible.

Thanks again to Jesse Schell for convincing me to go against my better judgment and draw a comic based on a friend's idea. Occasionally, you have to break you own rules, especially when the idea comes from someone whose intelligence is at times frightening.

If you haven't seen my previous collaborations with Dan Piraro in his daily panel, feel free to wade through the archive.
No comments:

And You're Not So Big

Today's Bizarro reminds us that no one is a celebrity in his own home, even someone with an impressive, managerial nickname. This joke arose from a conversation with friends around the time of a Bruce Springsteen concert or record release. Having never been a fan, and feeling contrarian, I remarked "He's not The Boss of me." It drew laughs from the table, and I scribbled the phrase on a scrap of paper.

A few days later, I made this sketch. Dan Piraro's finished art is pretty close, although he added some extra sass to the child's posture, and made the father a little more rumpled. The slippers are a nice little detail too. 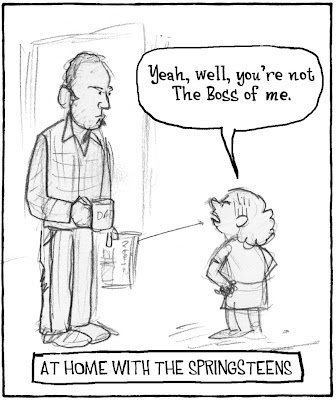 Playing off a musician's nickname is nothing new. The great tenor sax player Lester Young (1909-1959) was popularly known as "Pres" or "Prez" (short for "The President"), a monicker supposedly given to him by Billie Holiday. 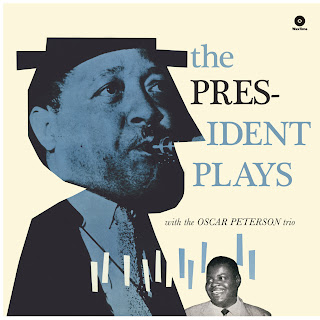 Jazzbos through the years have expressed political disdain by saying "My president is Lester Young."

My next collaborative cartoon with Mr. Piraro, which also has a musical theme, will appear on Thursday July 26, followed by a milestone of sorts on August 9. Our previous joint efforts are archived here.

By the way, today's cartoon took three hours and fifty-five minutes to draw and color, without a break. Several encores followed.
1 comment:

The Bizarro comic for Sunday, July 8 depicts a leader who refuses to take halfway measures. 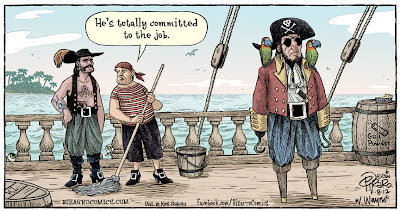 Pirates appear regularly* in Bizarro, almost as often as psychiatrists, bartenders, and clowns, so I was pleased to come up with a new variation on the theme.

Here's my sketchbook version of this gag: 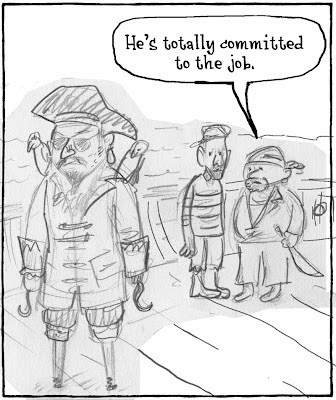 My submission is laid out for the daily panel format, and I was very happy to see that Dan Piraro chose to use it as a Sunday comic, giving him room to do a nice panoramic view of the deck with a bit of background scenery to top it off. I just noticed that Dan one-upped me by giving the captain twin beard-braids. A very amusing touch! If only we'd given him a spyglass...

We have many more new laffs in the hopper for your enjoyment. In the meantime, please browse the Piraro/Wayno Collaboration Archive.

*In fact, the first time I met Dan there was swordplay involved.
3 comments:

Time to Pull the Cork

Today's Bizarro comic plays with the use of the word "breathing" to describe the process of allowing wines to aerate before drinking. In this case, the wine needed a little help from medical science. Wine merchants offer plenty of products to quickly aerate wines to improve flavor, though they haven't quite taken such heroic measures yet. 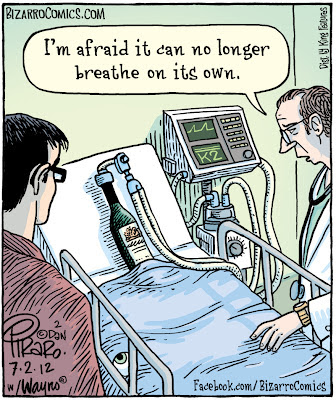 Here's the sketch I submitted to Bizarro's creator, Dan Piraro. 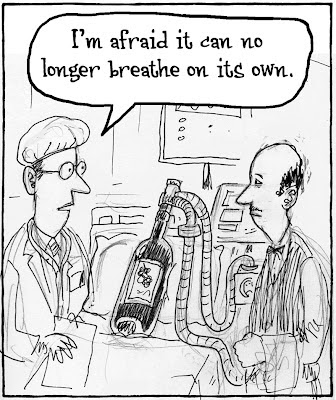 Dan made a few changes to the composition of the panel, which, as always, proved to be educational. The most obvious revision was to draw the bottle at a realistic scale relative to the characters. This further emphasizes the absurdity of the respirator, since the bottle is not cartoonishly out of proportion. Bizarro's humor works best when there's an odd element in an otherwise normal situation. The super large bottle as shown in my sketch introduced an unnecessary element of absurdity. (At least I didn't draw arms, legs and a face on my bottle.)

Another change Dan made was to show the secondary character from behind. This is a subtle but very effective compositional choice, and one that I hadn't thought of when drawing my panel. It gives the reader a sense of eavesdropping on something that's happening, rather than being presented with a staged situation. Again, this adds to the overall realism of the scene, emphasizing the strangeness of a lifesaving medical device attached to an inanimate object.

I'm not certain if it was Dan's intent to include me as a character, but I the observer in the published comic bears some resemblance.

Upcoming Piraro/Wayno collaborations will drop on Sunday, July 8, Wednesday, July 18, and Thursday, July 26. Beyond that, we've got at least six more in the chute, ready to be scheduled. In the meantime, you're invited to spend some time reading our previous joint efforts here.

First up is a drawing of The Residents, the venerable mystery band from San Francisco. This piece originally appeared on the cover of Cool & Strange Music Magazine around 2001. 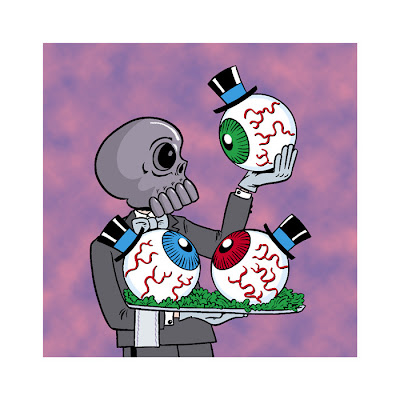 The second is a label design I did recently for my good friends at Pittsburgh's East End Brewing Company. 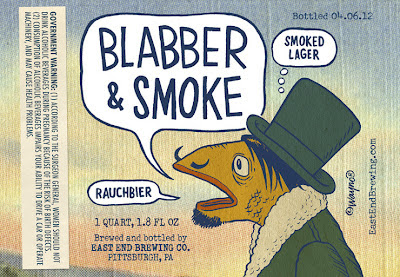 The beer was named after a song by the late great Captain Beefheart. I described the genesis of this label in an earlier blog post. We received several requests for label prints after the image appeared on Radar Station, a Beefheart fan site that seeks to document every twist and turn of the Captain's long, varied and unusual career.

The beer is only available locally, but the label prints can be shipped worldwide.
No comments: