Today's Bizarro comic is my latest collaboration with Dan Piraro, and is meant to contribute a bit of absurdity to your day: 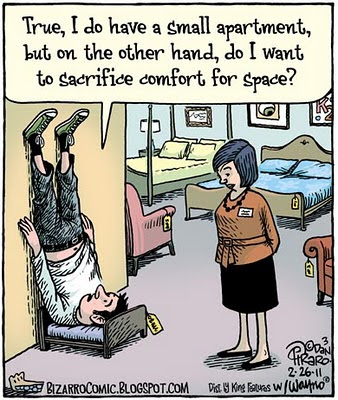 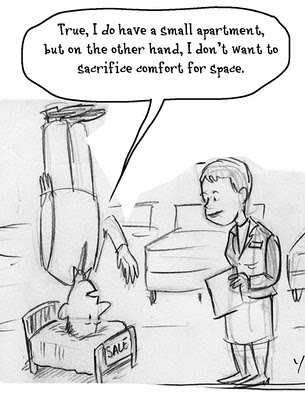 This is a case of a joke emerging from a random doodle. Sometimes I scribble while listening to music, talking on the phone, or watching TV. For some reason, I sketched an upside-down guy talking to a woman who could have been a sales clerk, or maybe a doctor. A commercial for an adjustable mattress caught the corner of my ear, and I added a bed to the composition.

Dan suggested we try a more realistic representation showing what the guy would have to go through in order to sleep on such a tiny bed, and he dashed off this hilarious rough with his reply: 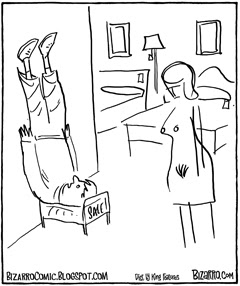 Removing the magical aspect improved the gag. In my sketch, the customer actually looks  comfortable and matter-of-fact, perfectly balanced on his head. In Dan's finished cartoon, you can almost feel the twist in his neck. His bunched-up pants and exposed bellybutton add nice touches as well. Sadly, the clerk's see-through dress didn't make it into the published piece.

The very entertaining Bizarro blog has moved to a new location. Dan posts every few days, and includes interesting commentary on his recent comics along with surprising and sometimes disturbing links.

Stay tuned for more collaborations, and in the meantime, review our previous joint efforts here.
1 comment:

Today's Bizarro comic is the most recent collaboration between Dan Piraro and yours truly, and imagines an early appearance of the late-century phenomenon of making faces out of punctuation.

Of course, the second word balloon is entirely unnecessary, and the finished cartoon is much better because of the editing (not to mention Dan's fantastic art).

If you enjoy Bizarro (and who doesn't?) I recommend the Bizarro iPhone app, which delivers each cartoon to your phone, and gives you acces to a full year of dailies, which, according to iTunes, may include the following:

All that for a buck ninety-nine. You can't go wrong!

Continuing a tradition I began in 2004, I just mailed my annual Chinese New Year card. 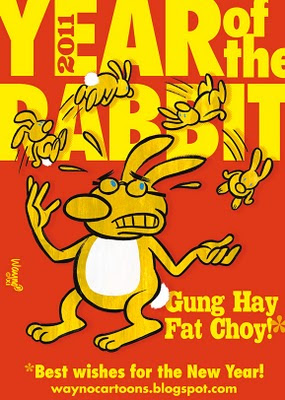 I'll complete the series of all twelve animals in 2015. I haven't decided whether I'll start the cycle again with the next Year of the Monkey in 2016.

If you, or someone you know, is turning 50 this year, their Chinese zodiac sign is the Ox. The Year of the Ox painting from my 2008 show animaliAAstroligica is still available, and would make a great 50th birthday gift. View it here.

Coming up on Friday: Another new Bizarro cartoon written by yours truly.