Today's Bizarro comic is my 150th published collaboration with my good friend and colleague, Dan Piraro. 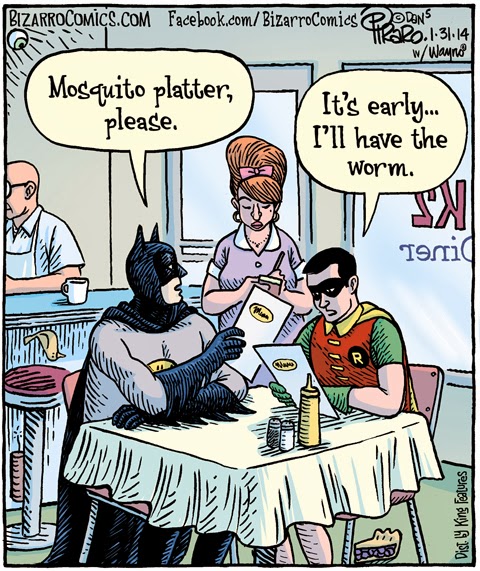 The gag imagines costumed heroes taking on the dietary characteristics of their namesakes, something I've used as inspiration in the past.

The submission sketch is cropped in closer, with less background detail, but overall the final art is very similar. 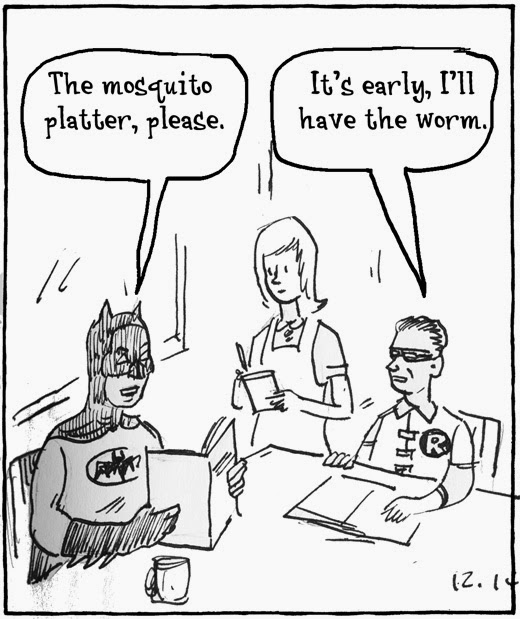 Did I mention that this is our 150th joint effort? It's hard for me to believe we've crafted that many gags together, until I stop to think that Dan does 365 cartoons every year, and has been doing it since 1986. He's produced something in the neighborhood of 10,000 installments of Bizarro, so a mere 150 doesn't sound very significant.

To see if I'm showing any improvement, here's my first published Bizarro gag, which ran in April of 2009.

Working with a masterful cartoonist like Dan is rewarding in many ways, and after five years, it's still every bit as thrilling to see a new gag make it to print. With every comic we co-create, I learn something about cartooning. For instance, last week I learned that I will never write a gag that features a bouquet of foil balloons, unless some other poor sap is coloring it. (You'll see what I mean in a couple of weeks.)

If you've got time to kill, and plenty of it, please feel free to browse our earlier joint efforts, in this blog's Bizarro Time Capsule.
1 comment:

Today's Bizarro is nothing more than a silly image, inspired by a goofy, made-up name for what we lovingly used to refer to as a mutt. 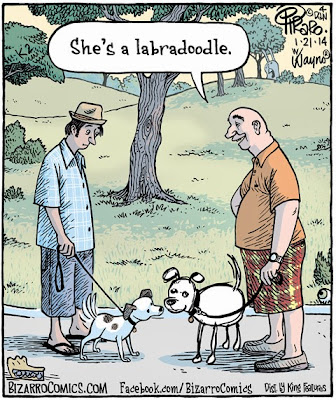 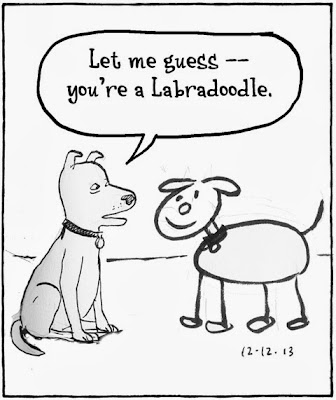 Although the joke is simple, its effectiveness depends on the reader first recognizing the incongruity of the scribbled pet next to a (relatively) realistic dog. The dialog provides resolution of the perceived paradox, which, we hope, is surprising enough to result in a laugh.

Dan's version added much more in the way of realistic detail, and made the 'doodle stand out even more. The sketched version would work too, and could be improved with final art in which the speaking dog is drawn to be even more lifelike.

As stated earlier, this cartoonist finds these grafted-together names to be rather silly. Although for a cross between a Labrador retriever and a poodle, the name "Labradoodle" is preferable to "Poo Retriever."

Speaking of unusual hybrids, please enjoy the other gags Dan and I have co-parented over the years, all of which are archived in this blog's Bizarro Warehouse.

Many more laffs are in store for the new year. Come back soon and see for yourself!
2 comments:

In Dog We Trust

Today's Bizarro comic peeks inside a canine cathedral and reveals a bit of scripture. 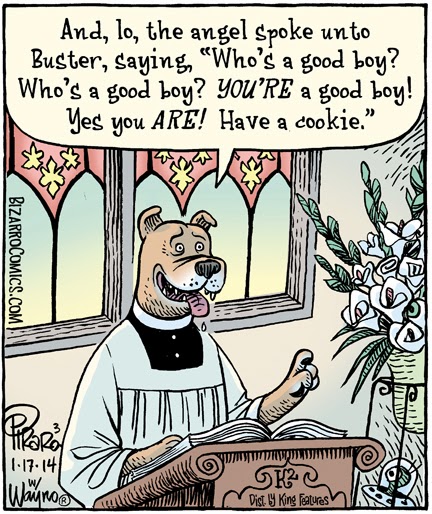 The submission sketch may be familiar to observant Bizarro readers... 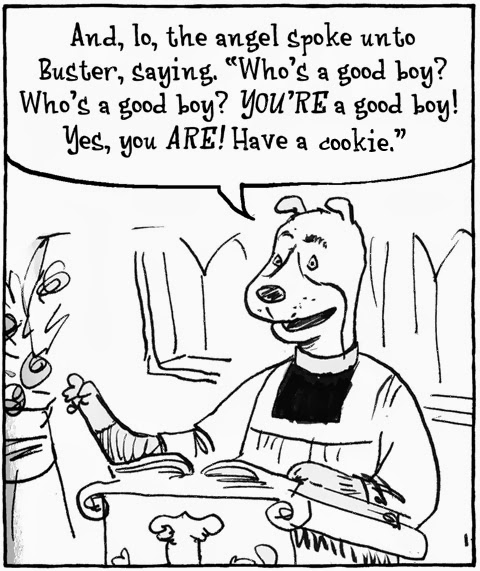 ...since it's based on an older comic exploring a similar theme. 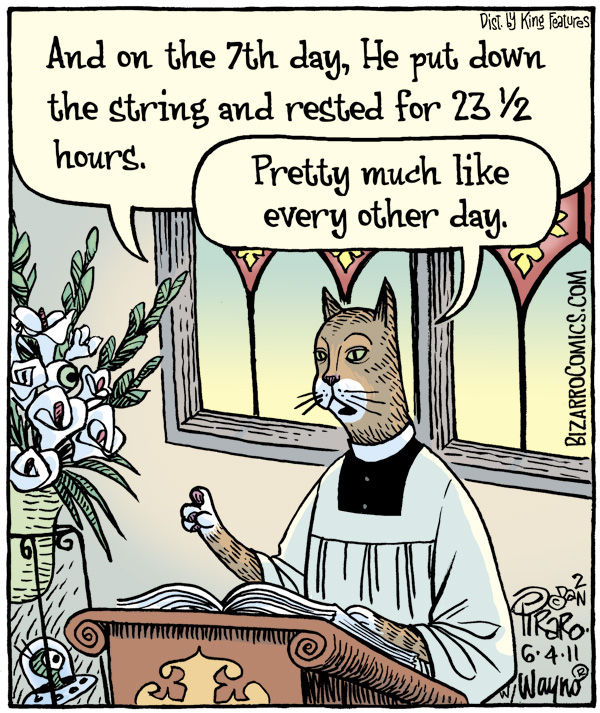 Each comic delivers a laugh while exposing an underlying truth about theistic systems, in which deities are created in the image of the believers. Taken as a pair, the gags also play upon our knowledge of the personalities and motivations of our animal companions.

This one caught me by surprise—I hadn't seen it before today. Since I color the dailies, I normally see the panels a few weeks before they're published. The preaching dog was in a batch that was drawn and colored during Christmas week by Dan Piraro himself, who gave me the week off to to spend time with the family.

I normally compose the blog post well ahead of publication, and revisit it a few times for editing. This post was slapped together this very morning, so please excuse any typos or formatting errors. Besides, I can always go back and edit after the fact. 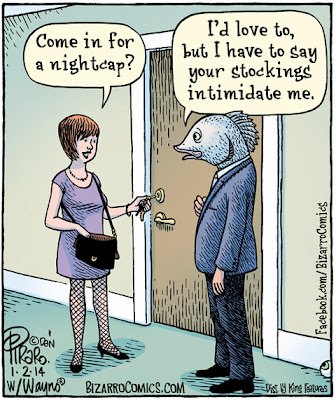 This one evolved quite a bit on its way from sketchy idea to published cartoon. My initial stab at it showed a trout-headed fellow admiring a woman's fishnet stockings. 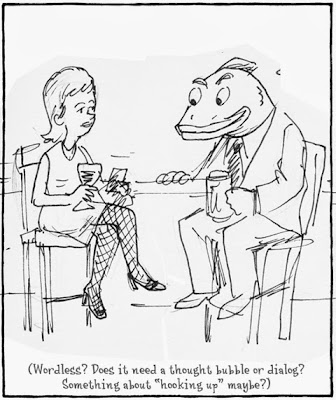 As the notes on the bottom indicate, I felt that this was a half-formed gag that didn't deliver its point effectively. I tried another approach, depicting a couple dressing for an evening out on the town. 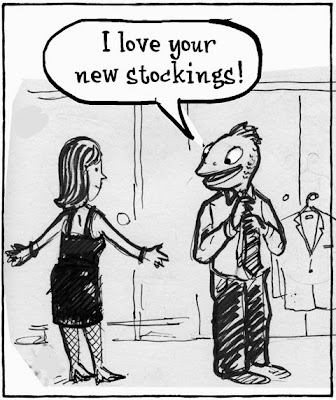 I like the composition and body language in this drawing, but realized that actual fishing nets don't attract their prey like a baited hook. They surround and entrap the animals, so a fish-man would probably not like to see fishnets on his partner.

Bizarro's creator, Dan Piraro, and I discussed the idea further, and together we came up with this revised version of the initial sketch. 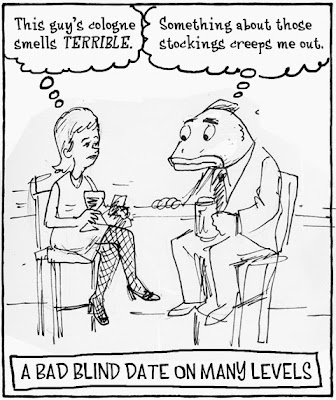 We settled on this version. It's funny and a bit surreal, and readers could relate to the awkwardness of a first date.

However, when Dan sat down to draw the final art, he came up with the scenario that was published today. It's even more direct, and eliminates the caption.

This panel is a very good example of our process at its most collaborative. It also illustrates how the cartoonist's brain continues to stew in the background, working on a gag until it's as close to perfect as can be. Each refinement to this joke was an improvement on the previous version.

We've got more chuckles in store for you this year, and they'll all be posted here as well as the usual social media outlets.

Please feel free to review all of our earlier joint efforts at your leisure.
3 comments: