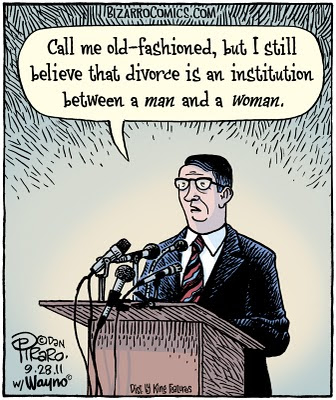 There's no sketch to show for this one. I submitted the joke as new text added to an existing drawing, so in this unique case, I only wrote the words. Dan Piraro—a man of good conscience and artistic convictions—didn't simply reuse the old art, and drew a new mug for the character.

Sadly, the face of our imaginary office-seeker could be replaced with that of any number of current politicos, such as this puritanical fussbudget who made today's front page: 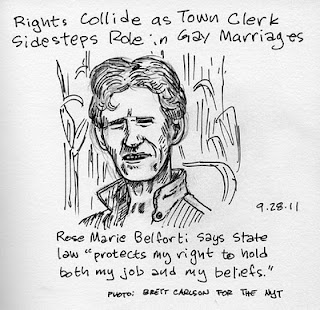 In a related note, I've just been ordained to perform marriages (seriously!), and I promise not to exclude same-sex couples. Fees are still undetermined, as is my chosen title. Available honorifics include Abbot, Brother, Deacon, Swami, Time Lord, Minister of Music, Saint (!), Doctor of Space & Time, and Grand Master Brain Wizard. How does one decide?

The next collaborative effort with my esteemed colleague Dan Piraro will appear on Thursday, October 6.

Since you read my scribblings, you might also enjoy the official Bizarro Blog, where you can see Dan's commentary on every one of his cartoons, and follow his always surprising links.
1 comment:

Some very nice art collectors contacted me recently to request prints of some of the labels I've done for my friends at East End Brewing Company.
We've previously offered prints of the Smokestack Heritage Porter and Ugly American labels (both of which are still available). In addition, we're now offering prints of the labels for Wooden Nickel, Monkey's Uncle Weizenbock and Coffee Porter (unofficially known as Eye Opener).

For the three newest ones, I've taken advantage of the larger size of the prints, and redesigned them slightly, removing the government warning required on the actual physical product, and making some other little adjustments for these future heirlooms. For the Coffee Porter print, I've gone back to our original design with both the eye and the opener.
Each print is made with archival inks on acid-free Arches cold-press watercolor paper, which comes to us all the way from France. The prints are 8" by 10" overall, with a live image area of 4½" by 6½", allowing it to fit into a standard 8" x 10" frame without a mat, if you're on a budget.
Prints are $25 each, plus postage, and I'll cut you a deal if you order more than one. Contact me via a blog comment or email if interested. 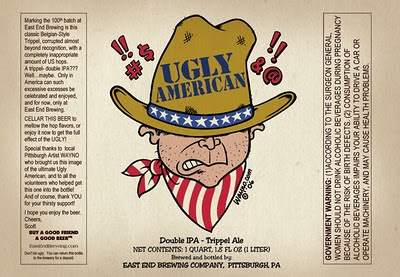 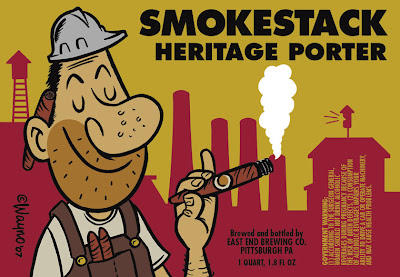 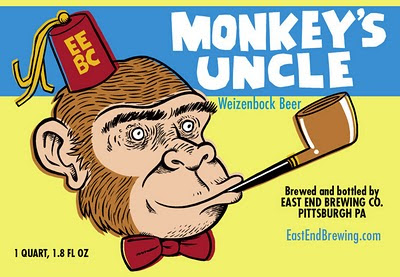 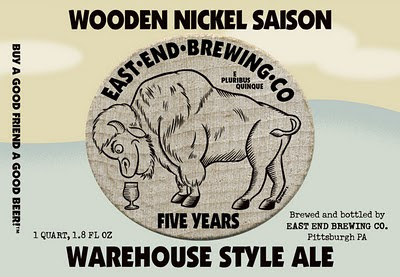 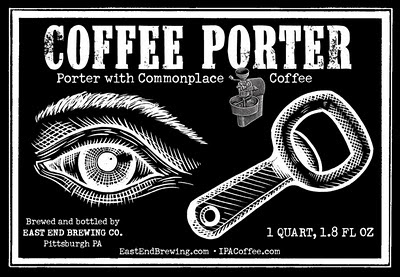 Today's Bizarro continues the time-honored tradition of setting gags in a psychiatrist's office: 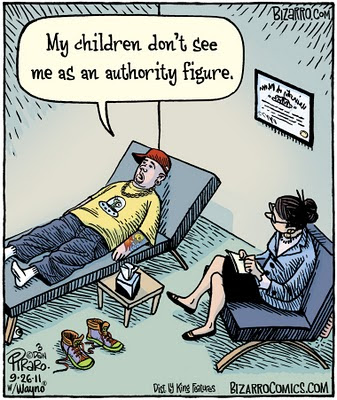 Here's the original sketch I submitted to Dan Piraro for consideration: 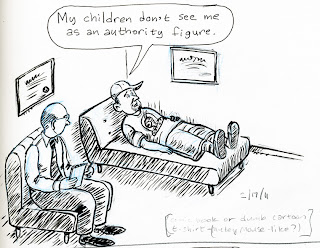 This cartoon provided an opportunity to comment on the fact that an awful lot of adult American males insist on dressing like four-year-olds wherever they go. It's hilarious and sad to see these guys out in the world, with no awareness of their ridiculous appearance.

Who could have predicted that twenty-first century men's fashion sense would be so strongly influenced by Abbot & Costello's neighbor, Oswald "Stinky" Davis, as portrayed by Joe Besser?
My next collaboration with Dan, a bit of political commentary, will appear on Wednesday, September 28. As always, our earlier efforts can be enjoyed in this blog's Bizarro archive.

As I mentioned a few days back, I often make sketches based on photos in the newspaper, in order to make sure I draw something every day. Today's victim subject is former eBay CEO Meg Whitman, who was named new CEO of Hewlett-Packard. 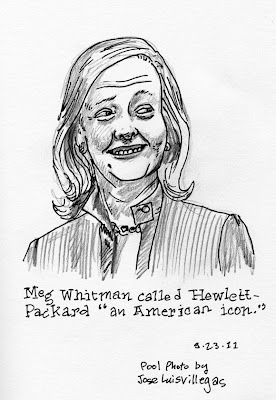 Email ThisBlogThis!Share to TwitterShare to FacebookShare to Pinterest
Labels: sketches

Today's Bizarro is a twist on the old "there's a fly in my soup" theme, featuring a very familiar character in an unfamiliar setting: 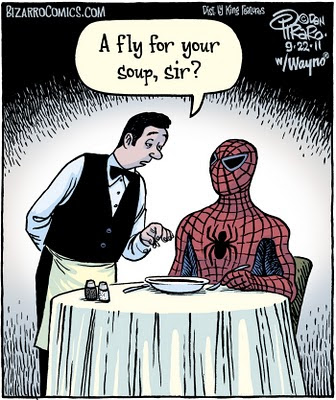 My sketch was a little more graphic, or at least more generous with the garnish: 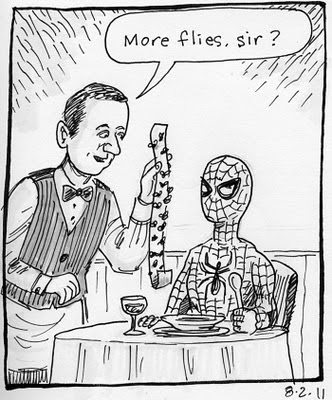 The above sketch was actually the second stab at this joke.

For you, my beloved blog-followers, here's the previously-unpublished first sketch: 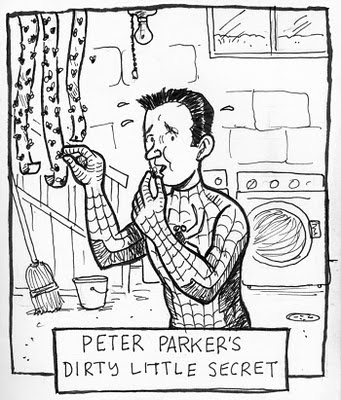 Bizarro's, creator Dan Piraro, and I both liked this gag, but realized immediately that it would never "fly" as a comic in the daily papers.

I generally prefer a more subtle, deadpan approach, but in this case, I still like the too-gross-for-the-papers "director's cut." This is probably due to my general antipathy toward superheroes. It was fun to show this guy truly doing "whatever a spider can," down to his dietary habits. Can't you just imagine him praying that his elderly Aunt won't walk in on him, catching him in the act?

Also, one has to question whether the average reader who doesn't work in a truck stop would even recognize flypaper.

Dan and I will share our next comic conspiracy on Monday, September 26. In the meantime, you're invited to view all of our previous collaborations in this blog's Bizarro archive.
4 comments:

Here's an effervescent Bizarro cartoon for your amusement: 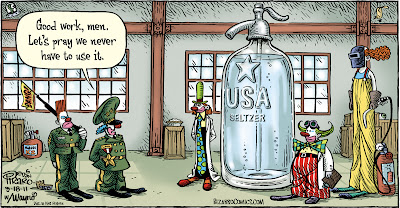 Dan Piraro's art is excellent as always. He makes good use of the available space in a Sunday panel, adding nice bits of background detail and a hilarious cast of characters. His rendering of the seltzer bottle is particularly impressive, and the light and shadows are very well done.

My submission sketch was presented in the daily panel format, and seems a little cramped in comparison the final version. 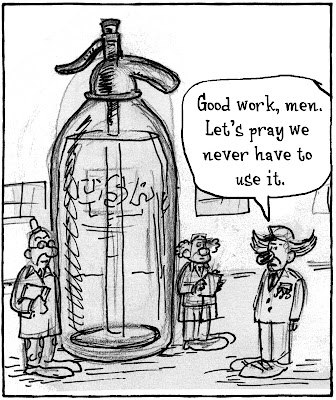 Landing a Sunday spot is always an extra kick, and this gag is one of my recent favorites. I like gags that show contrast between a straightforward line of dialog and an outrageous image (or a mundane scene with the weirdness in the text).

Dan just posted this one on his own blog, with additional commentary and informative reference photos.

Our next collaboration will appear on Thursday, September 22, and comes with an amusing back story. We decided that the original idea was too gross for the newspaper, but not too gross to share on the blog!

Please feel free to view all of the other cartoons Dan and I have cooked up together.
2 comments:

I recently spoke to a group of illustration students at the Art Institute of Pittsburgh (a very well-behaved group). One suggestion I offered was to keep a sketchbook handy whenever possible, and to draw something every day.

I haven't always followed my own advice (note the lost years 1997-2003), but I've filled enough books to occupy a nice bit of shelf space in my studio: 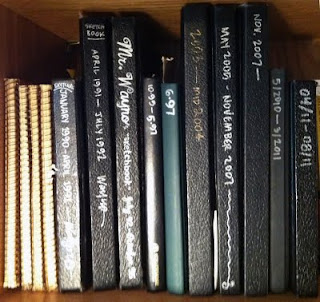 The first few, seen at the far left, are regular old spiral-bound notebooks, which in retrospect seems to have been a good choice. They weren't nearly as intimidating as a hardcover volume of archival paper.

Here's a representative example of a semi-conscious sketchbook drawing that spilled out one morning: 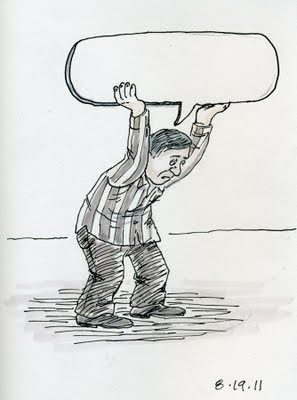 I like the image, though I have no idea what it might mean. There may be a gag buried in it, or perhaps it'll turn into a painting at some point.

A few weeks ago, I started doing quick sketches based on images I encounter in the newspaper. I read the New York Times every day anyway, so I've just added making a sketch from a news photo part of my morning ritual. Giving myself assignments with deadlines is a trick I use to force myself to actually complete something.

Here are some recent sketchbook pages that came from that self-imposed schedule: 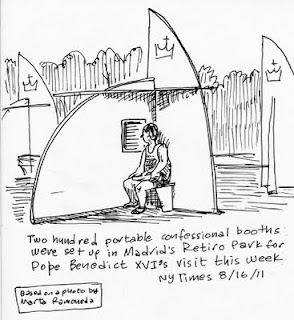 They could probably have saved money by "converting" Port-O-Lets. 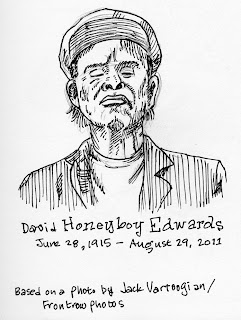 Honeyboy Edwards is generally acknowledged to have been the last of the original Delta bluesmen. Jack Vartoogian's powerful photo caught my eye that particular morning. 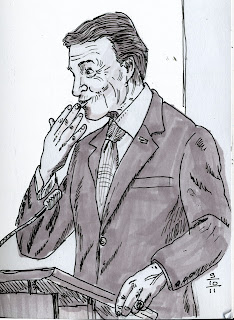 This drawing of Texas Governor Rick Perry is based on a photo that captured his annoying coyness and cynical embrace of willful ignorance. A friend recently remarked to me that Perry's stolen Michelle Bachmann's thunder as reigning crackpot in a crowded field of religious extremists and reality-deniers. 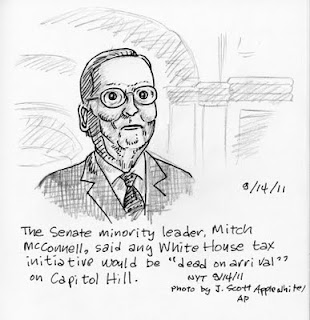 As an actual zombie, McConnell is well qualified to recognize something as DOA. 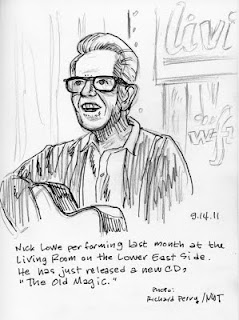 Nick Lowe is a longtime favorite. His new album, The Old Magic, is a beauty.
No comments:

Today's Bizarro comic is a grammatical gag written by yours truly: 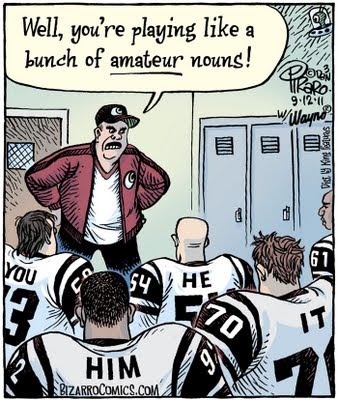 It's a neat, simple joke, and, being something of a word nerd, I'm quite happy with it. I particularly enjoy that it has to be "completed" in the reader's mind. 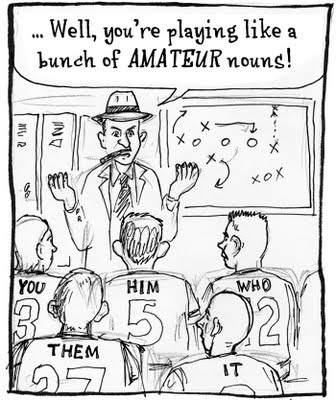 As you may know, Bizarro appears in an alternate version in some papers, in the space of a strip rather than a "portrait" layout. Dan draws his original art in the panel configuration and then digitally creates the strip layout. This cartoon also looks particularly pleasing in the strip layout, as shown below.

My next Bizarro gag will appear on Sunday, September 18. It's always an extra kick to get in on a Sunday, and the one coming up is a recent favorite.

Thanks for following this blog, and my ongoing collaboration with Mr. Piraro. Earlier examples of our teamwork are archived under the Bizarro label.