I Fall to Pieces

Here's a cartoon for Devil's Night: 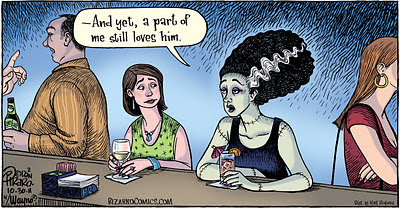 Mister Piraro's art always shines in his Sunday panels. Everything about this one is right on the money: the staging, the color, light and shadow effects, the facial expressions on the main characters, and the secondary denizens of the bar. It's a real beauty! The Bride resembles Joan Cusack, who, come to think of it, is an actor who'd be perfect for expressing the resignation, sadness, and humor in this scene.

The rough I submitted is laid out like a daily panel, and is of course, very sketchy. 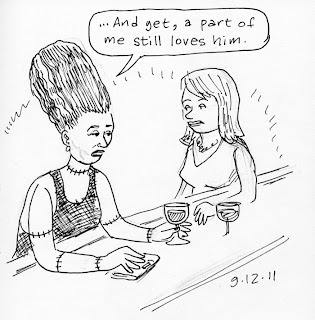 Dan and I both enjoy gags where something very strange happens to a normal person, or one that attaches a surprising image to a common phrase, as we did here.

Please do enjoy our previous collaborations, and follow my 140-character offerings.
No comments:

Today's Bizarro utilizes the old "plus one" trick as the basis of the joke, and features a couple of upwardly mobile aliens: 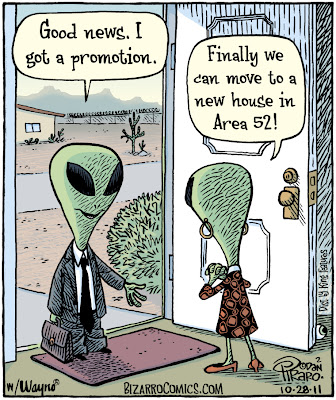 This is a device I've used before, which I'll hereafter refer to as a Tufnel. (If the gag involves subtracting a number or letter to create the gag, we'll call it a Reverse Tufnel.)

Here's the rough I submitted to Bizarro's creator, Dan Piraro: 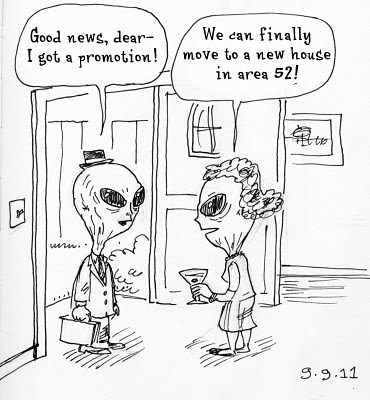 Dan added some nice background detail indicating that the home is actually located in the Nevada desert. Also, his aliens look quite a bit healthier than the ones in my sketch.

Our previous collaborations are archived here under the Bizarro label. We've stitched together a monstrous Halloween gag for Devil's Night (Sunday, October 30), which I hope you'll enjoy.

Thanks for reading. If you prefer shorter (or additional) messages, I welcome you to follow my Twitter feed.
No comments:

As an early Halloween treat to you, Dear Reader, here's a seasonal minicomic from 1991. This was actually an invitation to a pumpkin-carving party at our house. Five or six copies of were distributed. 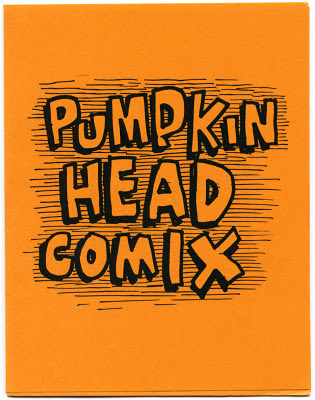 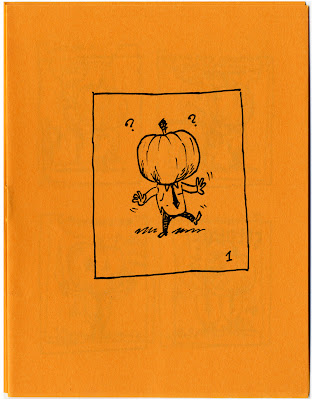 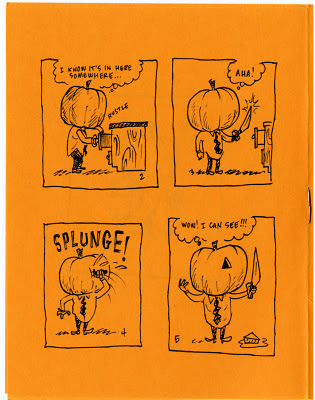 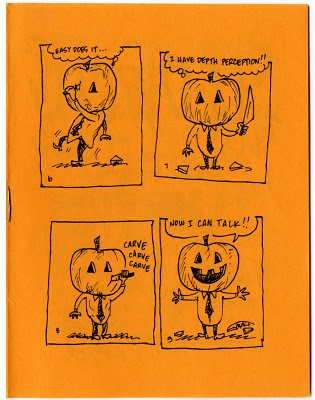 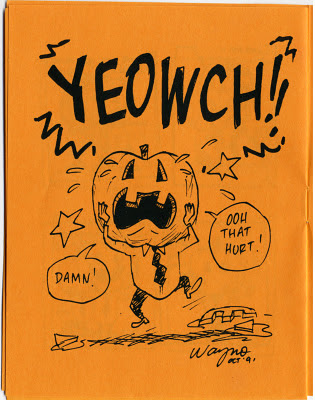 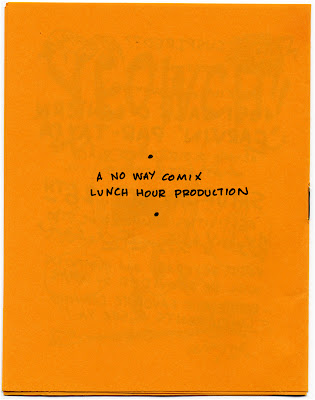 Today's Bizarro cartoon is a neat little quickie that gets in there and delivers the gag without any fussin' around. 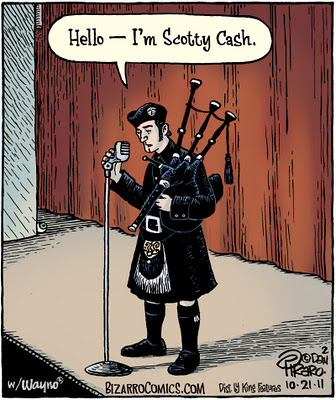 As always, Dan Piraro's art is spot on. Have you ever tried to draw a bagpipe? It's no easy task. Fortunately, the joke was, I believe, worth the effort.

The identical vowel sounds and rhythm of "Scotty" and "Johnny" immediately bring that great voice to mind, and make this one work. "Hello—I'm Angus Cash" just wouldn't cut the haggis.

My sketch is a little stiffer and simpler than Dan's version, but I think it does the job pretty well, too. 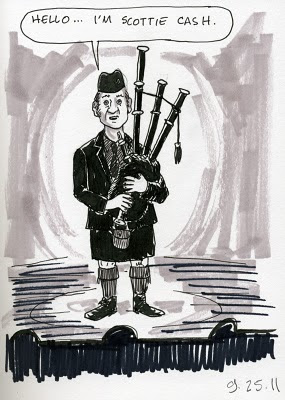 I usually draw from an eye-level "camera angle," whereas Dan incorporates more perspective, and often uses a "crane shot" point-of-view. I suspect that this helps when he formats his comics for the alternate strip layout used by some papers, and also makes things a little more interesting to draw. I've always admired Charles Barsotti's minimalist approach, so perhaps that's reflected in my own drawings.

The joke didn't pop into my head fully-formed, but was the result extended stewing. After receiving a card announcing the release of our friend Gwyn's latest book, my wife and I started batting around ideas about kilts. One thought that seemed to have legs (sorry) was a Scotsman whose "tartan" is solid black, perhaps a member of the Gaelic Secret Service. I jotted down a very quick sketch and a couple of possible takes on the concept. Interestingly, this early doodle looks more like Dan's version than the sketch I eventually submitted. 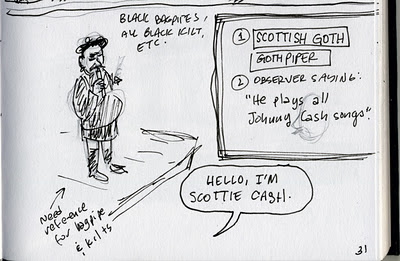 My good friend Brian, who recently helped me out with a great iPhone gag, suggested the caption Goth Ness Monster. I considered that one (and still like it quite a bit) but finally, a couple of days later, Johnny Cash (THE Man in Black) came to mind and the punchline fell into place.

I thought about discussing the connections between traditional Scottish music and some American roots music in this post, but I'm far from expert on the topic. A Google search of the phrase "Scottish roots country music," turned up a 2010 story from the Guardian about Johnny Cash tracing his own ancestry to Scotland, so it's possible that he referred to himself "Scotty Cash" at some point. At least I'd like to think so.

Oddly enough, the headline to this story reads Johnny Cash, the Man in Black Tartan. I swear, I never saw it before. Really.

Please browse all of the gags that Dan and I have produced together, and to check back around Halloween for the next three we have lined up. They'll run on October 28, October 30, and November 1.

Sketch Fest: Half of the Clash; Two Obits

Following are a few recent sketches based on photos in the morning paper.

Following up on previous posts, here are some recent sketchbook drawings.

Email ThisBlogThis!Share to TwitterShare to FacebookShare to Pinterest
Labels: sketches

Today's Bizarro comic involves very simple wordplay, and relies on the image to punch it up for the laugh. 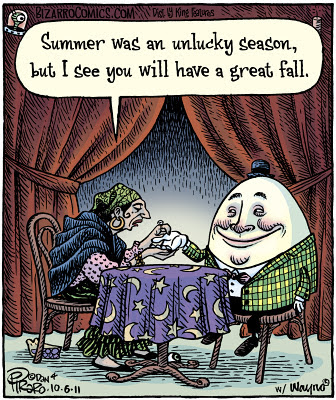 Dan Piraro's masterful drawing really carries this one. The line of dialog is identical to the rough I submitted, and the art is very similar, though Dan swapped the characters' positions, and emphasized the drapery in the background. 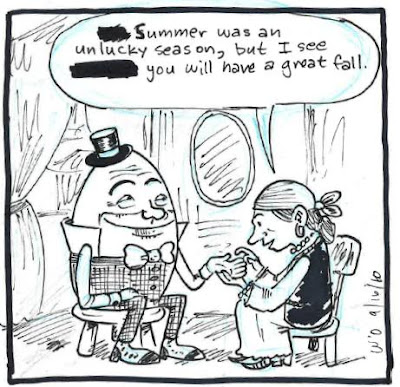 Dan's re-staging follows his general practice of placing the the payoff on the right side of the frame.

The model for Humpty  I had in mind was John Tenniel's version, as featured in Through the Looking Glass. At the time I drew this I wasn't able to access the web for a reference image, so I relied on my memory. Dan's version looks like an egg creature, whereas mine resembles a guy wearing some sort of egg mascot outfit.

Since I wasn't near my studio, I had to resort to using a copier with email capabilities to digitize the image, which explains the substandard quality of this scan.

My next collaboration with Dan will appear on October 21 Bizarro, and it's a recent favorite that I look forward to sharing with you.


As always, our previous cooperative cartoons are archived here.
No comments: