In addition to an illustration portfolio, my website includes some examples of my columns about music. Here's one from the archives that I recently posted: 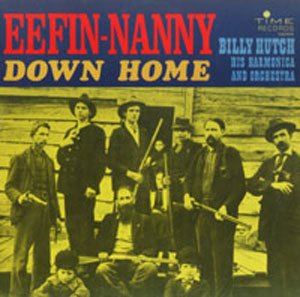 "Eefin" was a 19th-century hillbilly musical style that enabled non-musicians to participate in hoedowns. It manifested itself as hand-slaps across the thigh, and vocal effects such as grunts, animal sounds, Bronx cheers, and, most identifiably, a wheezy in-and-out noise something like "eef - ahhh - eef - ahhh."

Modern America was exposed to this forgotten art form in the 1970s courtesy of Hee Haw, one of TV's most inexplicable successes. Jimmy Riddle and Jackie Phelps performed short eefin' interludes as bumpers between the show's corny blackout skits. Given the show's popularity into the '80s and early '90s, a strong case could be made for Riddle and Phelps as the inspiration for The Fat Boys' "human beat-box" Darren Robinson -- a neat switch on the typical appropriation of black styles by white artists.

Hoping to trigger an eefin' craze in the early '60s, session player Billy Hutch assembled "a group of the best Nashville musicians" to record this entertaining novelty album. Curiously, no one apart from Hutch is mentioned by name. Most of the tunes are mid-tempo jug-band pleasantries, anchored by Hutch's languid but dependable harmonica (which reminds me of Roger Miller's stylized vocals). A few numbers pick up steam and bring to mind Benny Hill's herky-jerky filmed antics.

Liner note writer Pete Spargo misses the boat when he claims: "The beauty about this album is that the 'eefin-nanny' calls are not overdone, since that would become monotonous." I have to disagree. The eef-less selections are just undistinguished background music. It appears that those involved in this project were attempting to legitimize eefin and produce some sort of historically significant document. Their restraint sucked a lot of the fun from what could have been a hysterical lease-breaker of a record. Hutch should have taken this opportunity to go whole hog and load every tune with wacky effects.

Still, it's rare to see any recordings in this style, so until some flea-market archaeologist discovers another example (perhaps the legendary, rumored Jackie Phelps album!), this will serve as the gold standard for eefin records, alongside the Chipmunks' ultra-rare "Eefin Alvin" 45.

Originally published in In Pittsburgh's "Bin There, Heard That" column 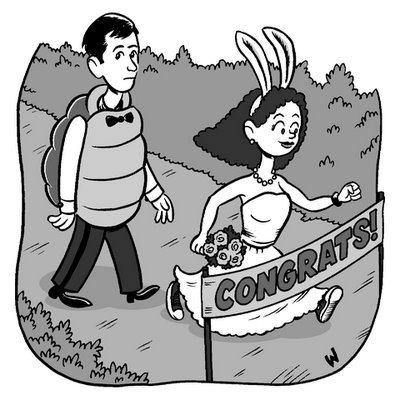 Last week I got an assignment from The New York Times. That's a first for me. This appeared in the "Sunday Styles" section, illustrating a story titled "Engagement Strategies Require a Commitment."

It was a nice gig, I hope they call me again.
No comments: