I recently reconnected with old friends Jad and David Fair, of the fiercely independent band Half Japanese. Twenty years ago, I did a comix adaptation of the song "Baby Wants Music," from their album Loud. Here's the two-page spread: 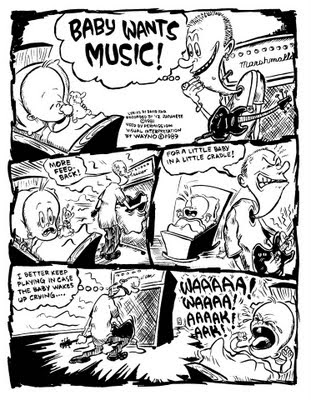 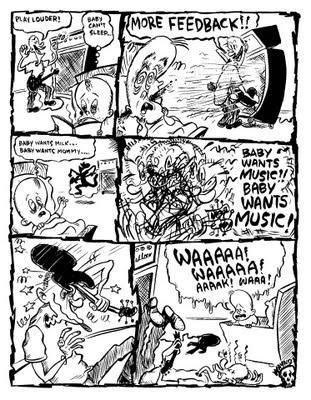 "Baby Wants Music" first ran in Chicken Slacks, a minicomic series published by my good pal Mary Fleener. I reprinted the strip in my solo book Beer Nutz, with the following "bonus track" running underneath. 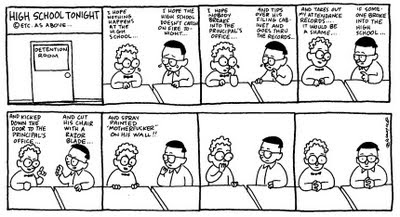 I also did interpretations of "Trashpickin'" by Ben Vaughn, and The Residents' "Easter Woman," with permission from the recording artists.
No comments:

Robin McConnell, who's responsible for the Inkstuds radio show on Vancouver's CiTR, recently asked me to assemble a digital mixtape for a special all-music podcast. Most of these are unusual items that I pulled from my little box of choice records (see Figure 1, below) and digitized myself. 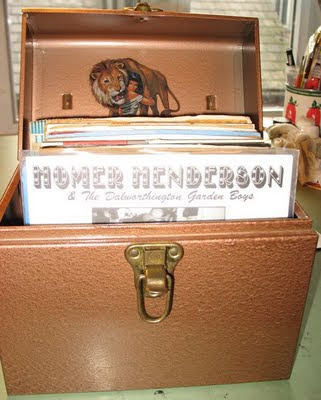 Here's a complete track listing with a comment or two about each selection.
1. The Out Crowd :: The Squares
A 1964 novelty on the Roulette label, performed by Kenny Young, who co-wrote the song with his partner Arthur Resnick. Young & Resnick's most famous composition is "Under The Boardwalk," but it can scarcely compete with "The Out Crowd."
2. Phonograph Records :: Scott-Textor Productions
This is one of ten vinyl-praising jingles from "Spark Plugs," a Columbia EP.
3. Sentimental Journey :: Esquivel
John Zorn once described Juan Garcia Esquivel as "a genius arranger who created a beautiful pop mutation." I could not have said it better.
4. Iena Sequence :: Roberto Pregadio
A delightful, breezy tune from the deep well of wonderful Italian soundtrack music.
5. Relax-Ay-Voo :: Dean Martin & Line Renaud
Dino duets with a long-forgotten chanteuse (who also recorded a version of "Louie, Louie!")
6. Take Me Out To The Ball Game :: Stuart McKay and his Woods
A 1955 Time Magazine review described Stuart McKay and his Woods as "A happy nonet, basically a saxophone quartet plus rhythm section, but more likely to be heard playing bassoon, English horn, flute, clarinet, oboe, with a discreet French horn on hand as well. Leader McKay plays nifty bassoon, fast and, when necessary, dirty. The rest of the crew has shrieking fun with sound effects…"
7. Got a Match? :: Frank Gallop
Gallop was a radio and TV personality whose record "The Ballad of Irving" was a favorite of Doctor Demento. I searched for this record for years after hearing a college friend's description of it.
8. On Her Doorstep Last Night :: Roger Ruskin Spear
A selection from Unusual, the second and final solo LP by RRS, of the Bonzo Dog Band.
9. Laisse Tomber Les Filles :: France Gall
France Gall's 1964 single was one of many Serge Gainsbourg tunes recorded by the comely yé-yé singer.
10. Powerhouse :: Ernie Felice Quartet
Raymond Scott's magnum opus, as interpreted by Ernie Felice's accordion-fueled quartet.
11. Witch Doctor :: Werner Hass
Wild German version of Ross ("David Seville") Bagdasarian's hit.
12. The Pirate’s Poop :: Cliff Ferré
Ferré made many naughty "party records," loaded with puns and double-entendres. On this selection he sounds like a scatological Tom Lehrer.
13. What’s A Nice Kid Like You Doing In A Place Like This :: Scatman Crothers
Scatman as the Cheshire Cat, from Hanna-Barbera's 1966 television special, "The New Alice in Wonderland." The cartoon also featured Bill (Jose Jimenez) Dana as the White Knight, Mel Blanc as the March Hare, Daws Butler as the Mad Hatter, and Don Messick as the White Rabbit.
14. A Really Big Show Tonight :: Kirby Stone Four (with “boy singer” Ed Sullivan)
The Museum of Television and Radio in New York has video footage of the KS4 performing this onstage with Ed Sullivan. Big Ed seemed to be quite game for a little self-parody. A classic.
15. Mr. Dante Fontana :: Piero Piccioni (featuring Alberto Sordi)
Piero Piccioni's theme for the 1966 film "Fumo di Londra," directed by and starring Alberto Sordi as an Italian who dreams of living in Swinging London. I never get tired of hearing this.

16. Hey Barmaid! :: Jerry Colonna
A bravura performance by Bob Hope's bug-eyed sidekick, who was often caricatured in Warner Brothers cartoons. WFMU has a nice Colonna tribute page, with additional music to download, on their blog.

17. Hawaiian Ungawa :: Homer Henderson and the Dalworthington Garden Boys
A wonderfully entertaining record from the mysterious artist and musician Jay Cotton. Jay collaborated with Gary Panter on the infamous Pee Dog comic book. "Hawaiian Ungawa" is the B-side of their single "Lee Harvey Was a Friend of Mine."

20. Eefin’ Alvin :: The Chipmunks
David Seville and the boys, cashing in on the eefin' craze.
21. Ballad Of Thunder Road (1968 version) :: Robert Mitchum
The second version of this tune that Mitchum recorded. They're both terrific.
22. That’s How You Got Killed Before :: Dave Bartholomew
One of my favorites by this New Orleans legend. At nearly 90 years old, he's still active, and occasionally sits in on trumpet at Preservation Hall.
23. Diddy Wah Diddy :: Captain Beefheart & The Magic Band
One of Beefheart's earlier records, a spiffy cover of the Bo Diddley classic.
24. Washingtron :: Tru Fax and the Insaniacs
According to the band's website, Washingtonian Magazine named TFI "worst band" in 1980 without ever hearing them.
3 comments: