Today, I'm happy so share my latest collaboration with the mighty Hilary Price:

Cartooning is mostly a solitary pursuit, so it's a treat to toss ideas around with someone else whose work you admire as much as I do Hilary's.

Here's the sketch I sent for her to review:

When I pitch gags to Hilary, I like to present them in the strip format she uses, to see how I can make it work in that layout.

The idea here is simple. We're exploiting two different meanings of the word "trim." Trimming a beard normally means to cut some of it away, but we applied the seasonal definition of adding decorations. Hilary capped the drawing with the title "Hipster Christmas," which adds a festive touch.

All of our previous collaborations can be viewed in this blog's Rhymes With Orange crate.

Thanks for checking in, and Happy Hipster Holidays to you and yours.
No comments: Links to this post 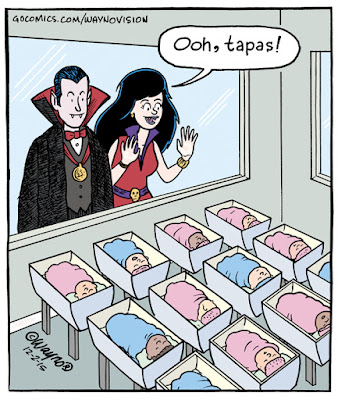 This comic generated quite a few comments, ranging from "Horribly funny!" to "You're a sick puppy!" to "I had to Google it, then I laughed for quite a while."

The fact that it got some attention was gratifying, because I'd pursued this idea for a few months before the gag took its final form.

The first sketches featured vampire bats. I reasoned that if a human provided them with a meal, perhaps mosquitoes would serve as appetizers. Here, we see a pair of bats and a sleeping man, in two attempts at a satisfying gag. 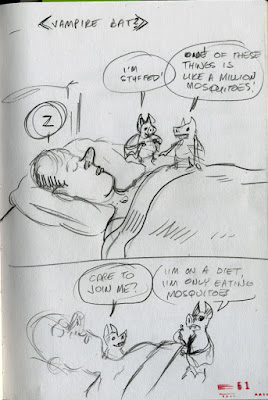 These fell flat, but the idea kept stewing. I tried another approach. 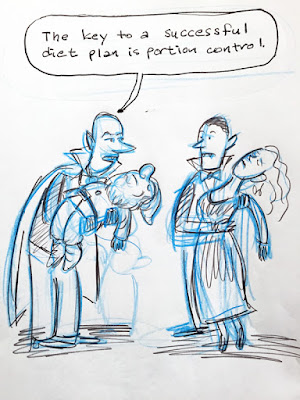 This turned out to be worse than the earlier sketches. My intent was to show the advice-dispensing vampire feeding on a smaller victim. Why I drew a Disney-style dwarf is anybody's guess, but it didn't work at all.

Both the dwarf and the maiden look like they're dead, which is disturbing as well as distracting. The only part I liked was the tension created by putting mundane dialog on an unexpected drawing, but this sketch was more confusing than funny.

A few days later, something reminded me of the familiar cartoon image of parents looking at an array of bassinets in a hospital nursery. I thought that would be a perfect setting for this undeveloped vampire gag, and the sketch almost drew itself. 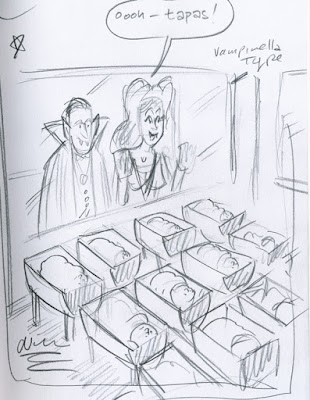 The finished cartoon follows the rough very closely, requiring only a few tweaks and a little cleanup. Finally, the gag made me smile—it uses a common setup in an unexpected way, and it requires almost no dialog.

A cartoon may take only a second or two to read, but it's a safe bet that the artist worked obsessively to edit the drawing and the text, deleted many failed attempts, fretted and agonized over it, and then worried whether the final product would connect with readers.

As always, your comments are most welcome.
No comments: Links to this post

Now We Are One

Exactly one year ago, my cartoon panel, WaynoVision, launched on the GoComics site. Today, we celebrate with a rare Tuesday installment. 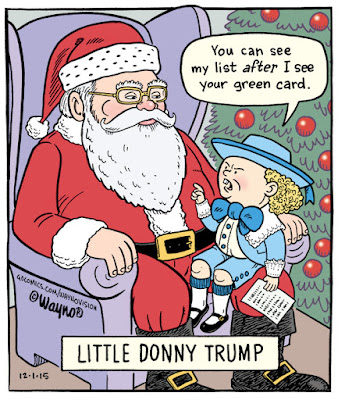 This gag has been rattling around in my head for a few years now. I originally pitched it to Dan Piraro as a potential Bizarro gag back in December of 2012. 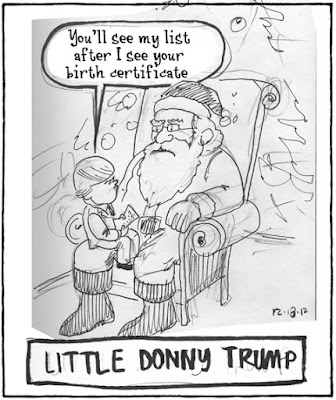 The cartoon was too late to make it into the pipeline, as daily comics are actually finished weeks or even months ahead of the publication date. We both liked it, and filed it away, though we fervently hoped that Trump would be long forgotten by the following December.

How wrong we were.

This year, the blowhard billionaire is even more visible than he was during the last Presidential election pre-season. So, I dusted off the gag and swapped out the "birther" dialog for a more current anti-immigration line.

Three years after doing the initial sketch, it was fun to draw it for publication, particularly after deciding to dress the character in a full-blown Little Lord Fauntleroy get-up, which is more in line with his personality than the business suit he wore in the earlier version. The drawing was also based on the late Joe Besser's portrayal of Stinky, the overgrown brat of the old Abbot & Costello show.
Actually, Trump is more petulant than Stinky ever was.

• • •
As I sit back and look over the stack of cartoons I've drawn for Year One of this feature, I'd like to extend my thanks to everyone who's read, shared, and commented on the comic. My deep gratitude also goes out to John Glynn and the fine folks at Universal Uclick/GoComics, for inviting me to join them on the virtual funny pages. I plan to keep doing it for many years to come.