Today's Bizarro requires no analysis or explanation. It's simply a pun illustrated by a very funny picture: 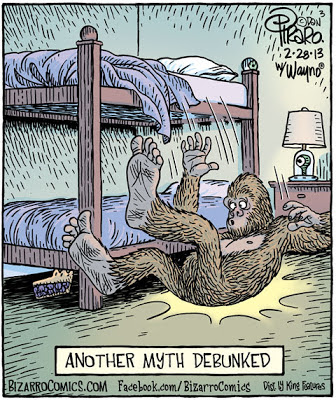 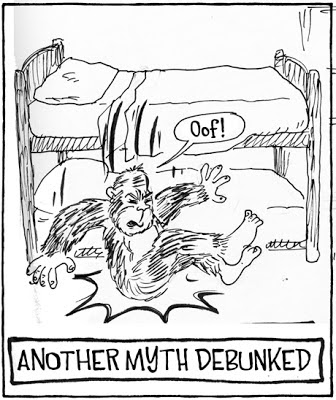 I fully expect this cartoon to show up on a certain ridiculous television program and be touted as proof of Bigfoot's existence. After all, how could a cartoonist ever draw such a perfect likeness without a live model to study? Well?

All of our earlier collaborations can be scrutinized for clues to other mysteries by scrolling through this blog's Bizarro Archive.

Speaking of the archive, you may know that in addition to writing gags, I've been assisting Dan by coloring the daily Bizarro panels. Before I started, I spent a couple of days looking over his shoulder, slack-jawed, studying his coloring technique. It's not just heave-ho with the old paint bucket. 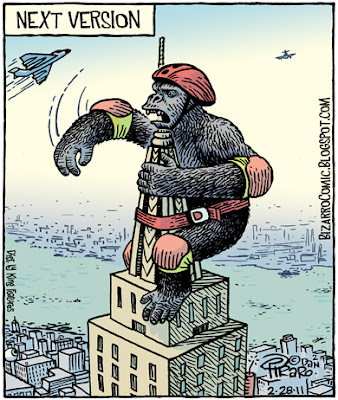 After coloring more than six hundred panels, it's still an enjoyable gig. Not only do I learn something every week by studying Dan's art, and continue to improve my Photoshop skills, but I also get to read the comics three weeks before they're published.

In another few years, I'll be fully vested in the Bizarro pension plan, and can look forward to monthly deliveries of tiny UFOs, pickled eyeballs, and novelty dynamite in my old age. Oh, the perks of working in the cartoon racket!
6 comments:

Here's a Bizarro cartoon that, for many readers, may require a bit of explanation. Definitions are provided later in this post. 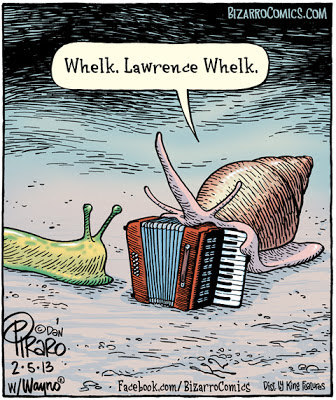 Once again, Dan Piraro improved the gag with his exquisite art, though I was pleased that it followed mine fairly closely.

My first instinct was to draw a "funny animal" version of the whelk, but I decided to follow advice Dan gave me some time ago. He said that when he drew a cartoon featuring animals, particularly insects or sea animals, he would do photo research to see what they actually look like, because they're usually quite interesting.

His final art one-upped me in the realism department, since I showed an accordion strapped to the sea creature, while in his version, it looks as if the mollusc just sort of slithered on top of the instrument. 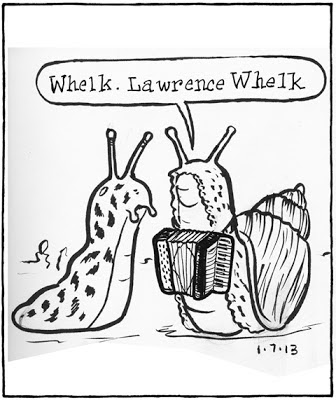 We both cheated a little with the other animal. It's modeled after the banana slug, which is actually a land animal, but the bright yellow color looks nice.

As promised, here are a few definitions to help those who were left scratching their heads by this gag.


whelk
noun
Any of various large, mostly edible marine snails of the family Buccinidae, having a pointed, spiral shell.

"Wunnerful, Wunnerful!"
title of this blog post
Variant spelling of "Wun'erful, Wun'erful!," a 1957 comedy recording by Stan Freberg, a multi-talented giant of American humor. The record parodied Welk's program, and featured Freberg imitating the host, and repeating the phrase "Wun'erful, wun'erful" over and over. Welk was said to have denied ever using the phrase, yet he chose it as the title of his autobiography.

By the way, if you aren't familiar with the work of Stan Freberg, you owe it to yourself to check out some of his recordings.

Also, please feel free to view my prior collaborations with Dan Piraro, all of which are archived here.
4 comments: