The last thing I do before framing a painting is to apply two coats of clear acrylic varnish. 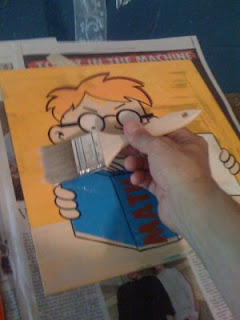 For this part of the process I move out of my "residential" studio (a converted spare bedroom in our house) to the more industrial space of the garage. 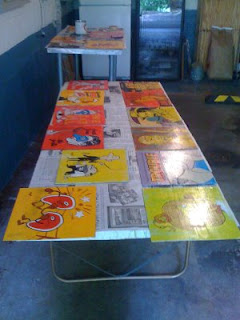 The clear coat gives the art a nice shiny appearance, and also provides protection from fading and damage, so they can be framed without glass. 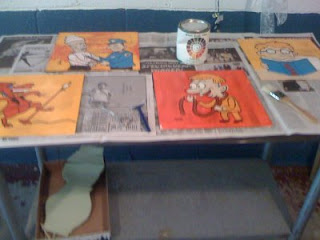 When dry, you could probably serve a cheese course on the paintings and wash them off without any harm, although my feelings might get hurt. 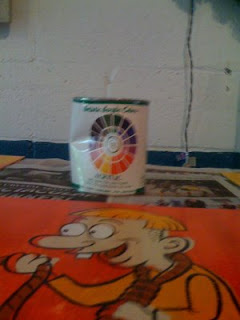 The coat of varnish also gives me a psychological endpoint -- it forces me to consider a painting to be finished, and to stop tweaking, repainting, and fussing over it. 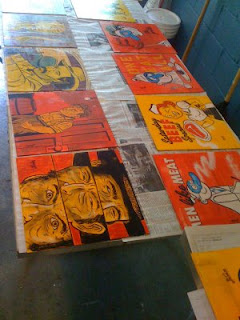 I snapped these with my phone; please excuse the shakiness.
3 comments: 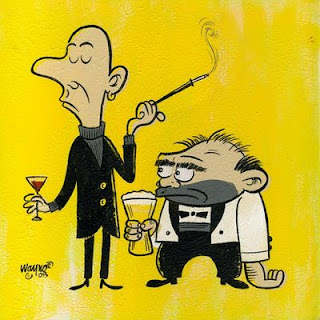 That's right kids, even if you don't live in Pittsburgh, you can preview my new show, Stubble & Smoke, by clicking on this link. All of the paintings are for sale on-line, too (except for Happy Hour, above, which has already sold to an alert and generous patron).

Check out 28 cartoon-pop paintings of tough guys, hard-luck mugs, saucy dames, crime scenes, the Chinese zodiac, and lots of red meat. As you cruise through the website, I recommend that you have a beverage and a small plate of cheese cubes on hand, with your choice of music playing at maximum volume. It's not the same as actually being there at Zombo Gallery, but that's the "Wide World of Web" for you...
No comments: 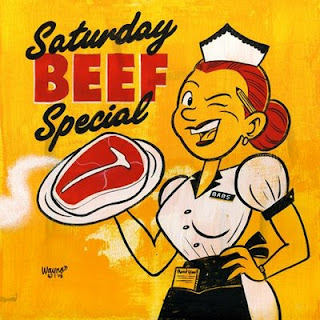 12" x 12" Acrylic on Masonite, 2008
Another preview from Stubble & Smoke,
based on a sketch posted on May 6.
Meat appears frequently in this show.

From Pencils to Paint

The final version of my James Coburn portrait: 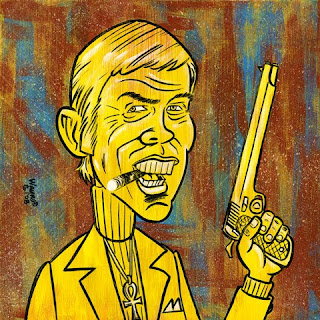 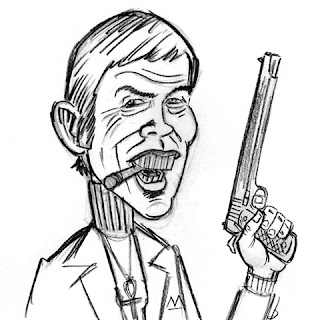 Now that I look at it again several days later, it's painfully obvious how
much the great Mort Drucker has influenced me. Not that this is at his
level, but I can see stylistic details picked up from years of marveling
at his work in Mad. He's a national treasure, I tells ya!

I'm doing some sketches for a portrait of the late great James Coburn. 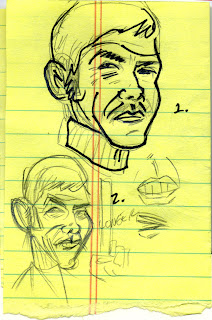 The first one above was done while looking at a reference photo,
and I did it pretty much in one shot, without erasing, then traced
over with a fine point Sharpie.
The second one is a stylized version of the first.
It has a little more flair and personality. 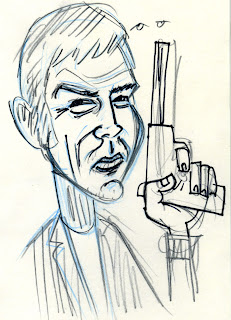 Next, an attempt to tighten it up. I decided that I wanted to change it
to show his enormous, immaculate teeth. 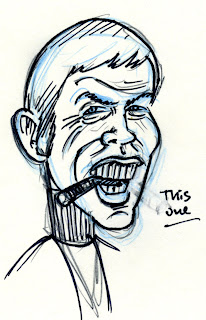 Getting there, but not quite. From the nose up, I'm pretty happy with
this version, but the lower half needs more work. I'll scan it and do
some manipulation in Photoshop, playing around with size and position
until I'm happier with it. Then I'll print out a lightened version of the
new composite and re-sketch from there.

Actually, I like the top half of that very first rough. I think this is still recognizable as JC.

Gallery owner, entertainer, and impresario Michael Devine has created a welcoming home in Lawrenceville for artists of unique vision with his brainchild, the Zombo Gallery. In the past twelve months the gallery has hosted a dozen art shows, musical performances, retro-kitschy flea markets, benefits for Democracy Now! and The Wildlife Center, and the burlesque life-drawing class, Doctor Sketchy's Anti-Art School.
The featured artist for the anniversary show is Wayno, whose 2007 solo exhibit, Squaresville, opened Zombo Gallery with a bang, drawing an overflow audience of 300 art lovers, and selling out on the first night. To celebrate the gallery's anniversary, Wayno returns with a new collection of paintings in his unique cartoon-pop style.
Wayno is a cartoonist, illustrator, artist, and writer based in Pittsburgh. His clients include The New Yorker, Nickelodeon Magazine, Rhino Records/Warner Music Group, McGraw-Hill Books, Entertainment Weekly, The Guardian, Pittsburgh City Paper, and The New York Times. He is a member of the Pittsburgh Society of Illustrators and the National Cartoonists Society, and is a founding member of the Board of Directors of the ToonSeum, Pittsburgh's museum of the cartoon arts.
Stubble & Smoke evokes film noir moodiness, and feature images of tough guys, saucy dames, down-on-their-luck chumps, and that staple of the hard-boiled mug's diet: red meat. The show also includes the artist's Chinese zodiac series, animaliA Astrologica, first previewed at the Gypsy Café in February, which recasts the traditional zodiac signs as westernized party animals. In response to many requests, Wayno is now offering several limited edition prints, including portraits of Rat-Packers Dean Martin, Frank Sinatra and Sammy Davis, Jr., East End Brewing beer label art, and a Stubble & Smoke show poster.
Devine said of the exhibit, "After the incredibly successful opening of Squaresville last July, the first thing Wayno said to me was 'Same time next year?' I can't think of a better way to kick off our second year in "Larryville" than having a show of new stuff by Wayno."
The Stubble & Smoke opening reception is on Saturday, July 12, 2008, from 6:00 to 9:00 PM, and is sponsored in part by East End Brewing Company and Tony G's Delafield Winery.

The Zombo Gallery is Pittsburgh's home for hip lowbrow art, rooted in 50's and 60's pop culture and kitsch. The gallery houses a retail area with unique wares such as tiki mugs, custom T-shirts, DVDs, CDs, and recorded air checks of Zombo's radio show, which is heard Fridays from 10:00 AM to 3:00 PM on WRCT 88.3 FM. The gallery also houses a custom screen printing shop.
For additional information, visit Zombo's Website