Today's skeletal Bizarro cartoon features yet another gag from yours truly. It's a variation on the ubiquitous "a ________ walks into a bar" theme. 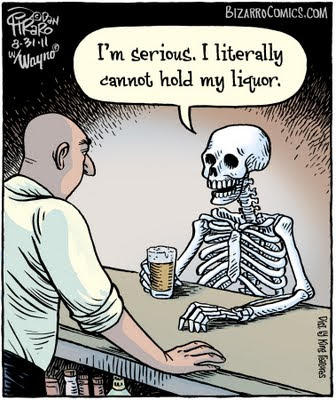 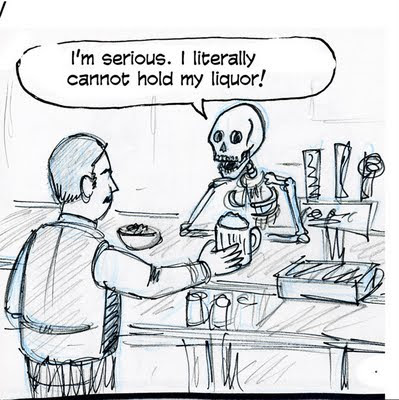 Dan changed the perspective a bit, and got rid of some unnecessary detail, but the subtle change from an exclamation point to a period at the end of the text made the biggest improvement to the joke. I've mentioned before that Dan's masterful use of deadpan expressions and dialog almost always makes the comics funnier.

As always, you can find our previous collaborations archived on this blog. The next one is on schedule for September 12.
4 comments:

Beer with a Pixburgh Accent

I'm pleased to reveal my label design for the newest limited edition hand-bottled brew from my great neighbors at East End Brewing Company. 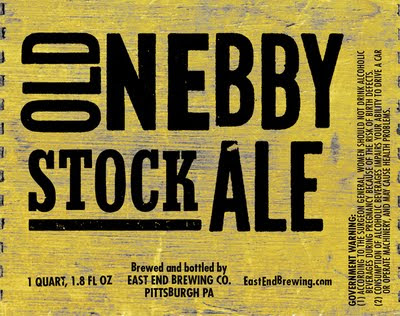 East End's owner and brewer Scott Smith explained the idea of Stock Ale to me when we discussed the label design, but I won't try to paraphrase here. The beer world has a particular vocabulary, and the terms all have very specific meanings, and I certainly don't want to get something wrong and upset any beer nerds. I feel safe in saying that British stock ales were historically a strong brew, and the landlord of your local pub would blend it with a milder ale, depending on a customer's preference.

If you're not a Pittsburgher, the word "nebby" might sound odd. It's a regionalism meaning "nosy" or "snoopy," and is generally believed to have come from the Germanic root "neb," meaning "beak."

For this down-to-earth, non-nonsense brew, we decided to go with a label that suggests a beat-up wooden crate. The background texture was scanned from an weathered cigar box, and the main letterforms from a couple of old letterpress prints. The rest of the text is Futura, my standby typeface, digitally distressed and misaligned.

I'm looking forward to tasting this one, and wonder if Scott will suggest blends to his customers.
No comments:

The Right to Bear Pastries 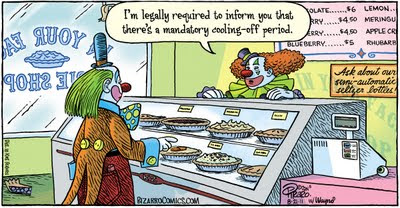 And, for comparison, the sketchbook version I submitted: 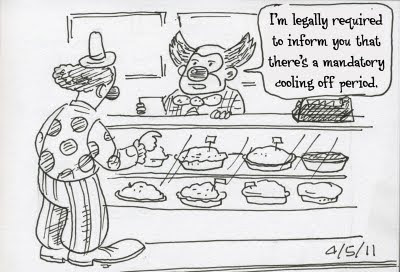 Mister Piraro used my text verbatim, but he really went wild with his gorgeous art for this Sunday panel. He took advantage of the extra real estate to add a lot of little "business," including the shop name on the window, which also appears in the shadow behind the proprietor.

I'm especially pleased with this one because of the dual meanings of the phrase "cooling-off period." It's a neat little play that provides an extra (flaky) layer to a fairly simple gag.

Clown figures have turned up before in my many collaborations with Dan:

clown
clown
clown
There will be more to come. Clowns also appear in a lot of my paintings:
Coulrophobia (fear of clowns) is a fairly common condition, and people have asked me if I'm afraid of them, since they appear in much of my work. My answer is that I'm not afraid of them, I just don't like them. At least not the Western type usually seen in cartoons.

I do, however, like the clown characters in my paintings, which are modeled after Pulcinella, the masked jester of Italy's Commedia dell'Arte. I began painting this character in commissioned works for a client, and found him to be an appealing and accommodating subject, able to step into various roles. But rainbow-haired creeps with giant shoes and an underlying air of desperation are simply annoying.

*Since Sunday newspapers, particularly the supplements, are generally available on Saturday, we're considering the Sunday cartoons to be public the day before "official" publication.

These Cards are Marked!

Here's my latest gag to appear in Dan Piraro's Bizarro: 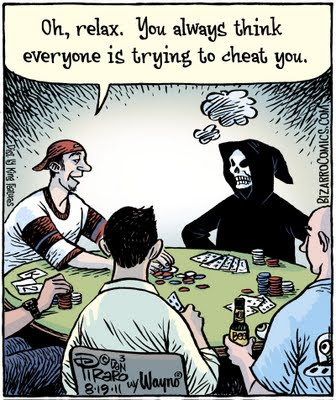 This is one of those concepts that evolved over time. 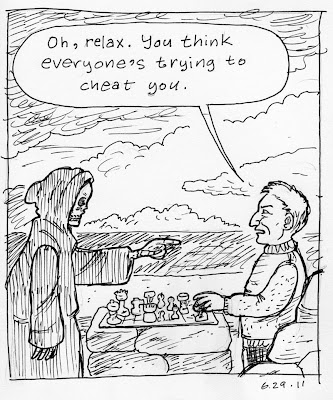 The sketch I submitted (above) was based on a famous image from Ingmar Bergman's 1957 film The Seventh Seal.
Dan suggested that the chess motif was a bit overused, and that changing the scene to a card game might make for a better cartoon, and he was spot on. Discussing our collaborations earlier this year, Dan said, "Our sense of humor depends on the most part on a realistic scene with realistic people where something really strange is happening to them," and this cartoon is a perfect example of that combo. The casual demeanor of the regular mooks provides a nice contrast to the presence of the Grim Reaper at a basement poker game. The Bergman-inspired image is a completely strange scene, with no realistic grounding for the reader.

The idea of gambling against death as depicted in The Seventh Seal is frequently parodied, and has become familiar through those very spoofs. People who have never seen the original film and know nothing about it still have enough awareness of the concept to make the joke work, similar to the cartoon we did referencing The Graduate.

I'd been playing around with a joke built on Death resenting people trying to cheat him for a long time, beginning with this unpublished New Yorker style cartoon from 2007: 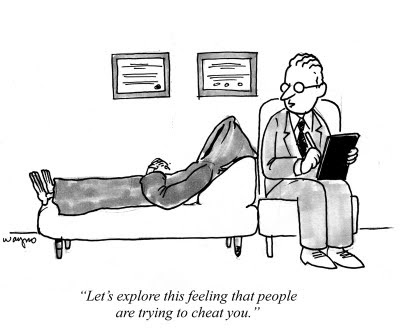 Apparently, my brain had been quietly processing this for nearly four years, and spewed it out again, with the joke finally seeing print today. The 2007 drawing mashes up two stock characters: The Grim Reaper and a psychiatrist. Had I placed them on a desert island, it would have been a gag cartoon hat trick.

My next collaboration with Dan will appear on Sunday, and it's one of my recent favorites.

The fifty-odd (!) cartoons we've done together are all viewable in this blog's Bizarro Archive.
4 comments:

Another Furshlugginer Gag from Wayno

I'm a week late posting my most recent gag in Hilary Price's comic Rhymes With Orange.

It's of course a tribute to the long-running feature by the great Al Jaffee. Mister Jaffee has been creating these ingenious pages since 1964!

My sketch was done in a panel layout, and the dialog was a little wordier: 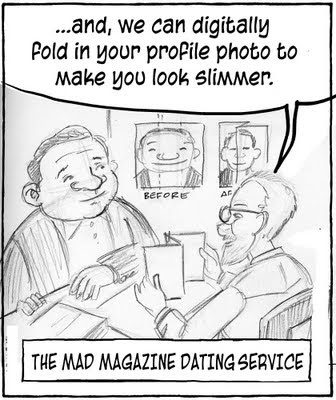 I tried to make the guy behind the desk look something like Jaffee, which nobody would ever have noticed, but was a bit of fun to throw into the drawing.

My previous collaborations with Hilary are viewable here.

Watch for two new Bizarro gags, coming up this Friday and Sunday.
2 comments:

I'm (happily) busy with some cool projects, so this Bizarro post will be brief. Today's comic is a zoological spin on a phrase my parents used regularly. 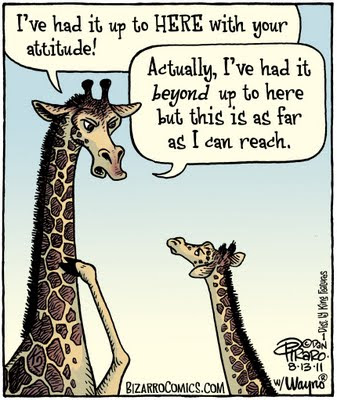 I'm fairly certain that my mother often wished for longer arms to express the extent of her fed-uppedness with me.

My submission sketch showed a wider view of the giraffe family. Dan chose to crop it in closer, but used my text unedited. 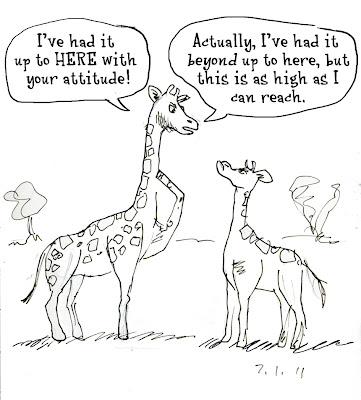 •••
Yesterday I had the pleasure of speaking to a group of illustration students and faculty members at the Art Institute of Pittsburgh. They were kind enough to invite me to discuss my work (including my collaborations with Dan) and some of my interests and influences. Thanks to Mark Bender for getting the ball rolling on that.
2 comments:

Today's Bizarro marks my 50th appearance in Dan Piraro's terrific comic. It's as thrilling as ever to see something I've written published in this space. 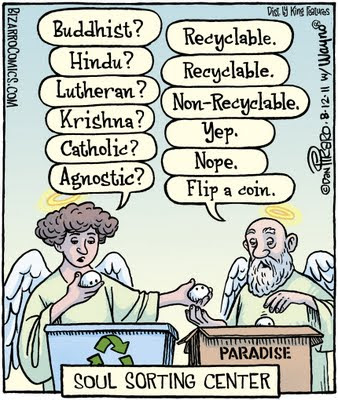 Here's my submission sketch, which Dan ran with for the final cartoon: 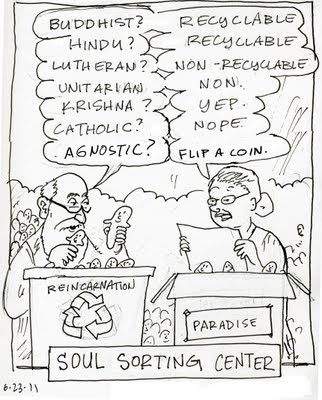 The inspiration for this joke came from a suggestion I received from my buddy Joel:


I was at a meeting this morning, and someone swatted a fly on the table. Then he picked it up by the legs, walked over to the trash bins, and looked back at us and said “this is recyclable, right?”

There has to be a good one in there somewhere. The rest is up to you.

After chewing on it for a while, I hit on the idea of a center where souls are sorted according to the beliefs of their earthly owners. The most time-consuming part of this was researching the dogma of various faiths.

Thanks for the fodder, Joel.

Big, goopy thanks to Dan Piraro for working with me over the past couple of years, and continuing to do so.

•••
All of my earlier collaborations with Dan are archived here. The very first one was published on April 3, 2009.

Another new one will appear tomorrow, with three more following over the next week or so.
No comments:

What the Heck is a Streptonym?

It has nothing to do with germs...

One of my recent gags for Dan Piraro's comic Bizarro was based on a form of wordplay where two phrases are linked by a common word to form a new, surprising combination: 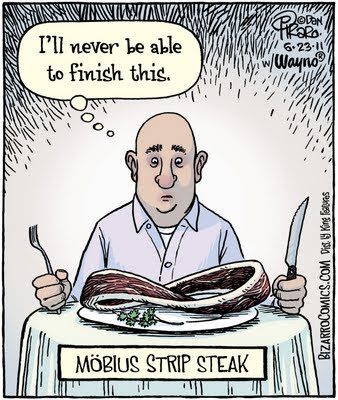 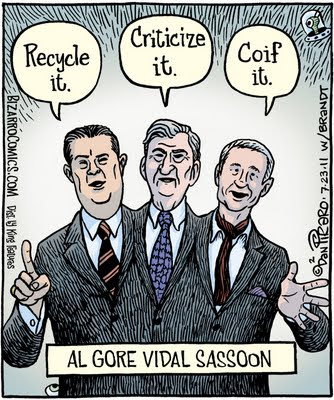 I quite like both comics, and have encountered (and used) the same form of wordplay many times. I wondered what it might be called, and was unable to find a satisfying answer. It's not a pun, a spoonerism, or a malapropism. What is it exactly?

Jeopardy uses it in a category they call "Before & After." While descriptive, I find the name to be lacking elegance. The Website wordnik calls these constructions "sweet tooth fairies." This also feels flat, as it simply uses an example of a thing to name the thing.

So, I've come up with my own name for a sequential mashup of unrelated phrases: streptonym.

This neologism combines the Greek prefix strepto-, which means "bent," "twisted," or "resembling a twisted chain," with the suffix -onym, meaning "name" or "word" (also from the Greek). In addition to describing the technique, it utilizes it, with the common letter o as the linkage point. Taking a small liberty with the definition of "twisted," a good streptonym should also have a humorous twist.

Initially, I used the plural form, as the term refers to a series of words, but now I prefer the singular (streptonym) to refer to the chain of words as a unit.

I could find no earlier occurrences of the word streptonym online, so—at least for now—I'm claiming it as my creation. Are you listening, Oxford Dictionaries?
5 comments:

Here's a gag I wrote for Hilary Price's Rhymes With Orange: 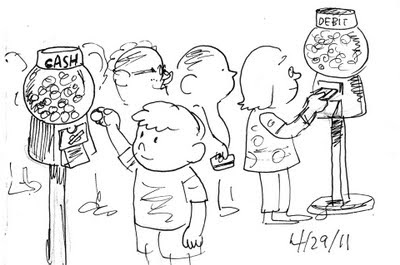 Hilary chose to delete the other characters, the coin-operated machine, and the text. She depicts one forlorn kid, coin in hand, staring in disbelief at the plastic-only gumball machine. Removing the clutter adds a sense of pathos and isolation, giving the joke more depth.

My version is visually denser, but the joke itself is less complex: everybody's happy here. Hilary's drawing introduces conflict — the poor kid has no place to go for his treat. It's a nice refinement.

Plus, a single character is easier to draw than a crowd, and any artist can appreciate that.

This is my second collaboration with Hilary. We currently have one more in the can, and are working on more for the future.

Next Friday and Saturday (August 12 and 13), I'll have back-to-back gags in Dan Piraro's Bizarro. Friday's spot will be my 50th Bizarro appearance. Congratulatory notes (particularly large denominations) will be gratefully accepted.
2 comments: