As the summer draws to a close, our thoughts are with the teachers, students, school personnel, and parents navigating the start of a school year unlike any we've experienced before. Fortunately, many of the country's educational leaders are focused on ways to keep the sports industrial complex humming along.

From the quarantine bubble here at Bizarro Studios North, we're working to provide temporary relief from the daily outrages with humorous words and pictures. Here are the latest from our little comics factory. 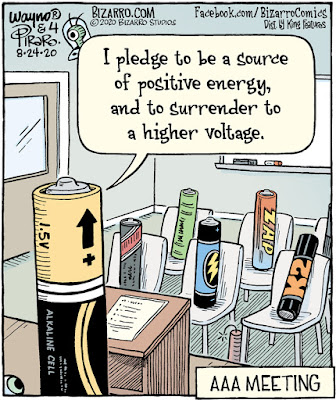 The center battery in the back row sports a logo based on the cover of Zap Comix #7, drawn by Spain Rodriguez. 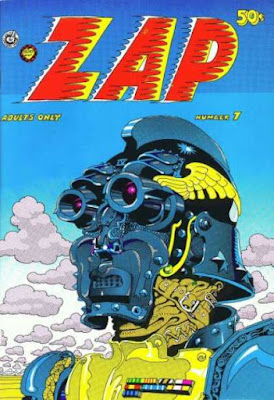 As a music-obsessed kid, I spent much of my free time (and all of my lunch money) in record stores. Many independent stores also had a display case or spinner rack of underground comix, and Zap was the first title I grabbed. Several times throughout my childhood, I had the experience of finding something that I absolutely knew my parents would not want me to have. 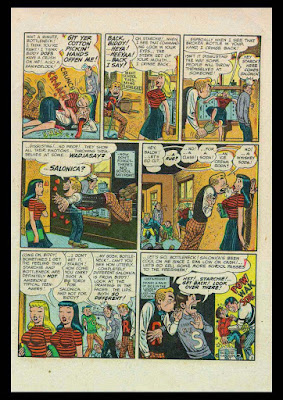 The first time I was aware of that special thrill was when I discovered the earliest MAD comics in crappy paperback reprints issued by Ballantine Books. Will Elder's art in "Starchie" blew my preadolescent mind.

Later, the first issue of Robert Crumb's Zap gave me a high-voltage version of that rush that came with the recognition of something that would be forbidden if Mom and Dad were even aware of its existence. I wasn't a big drug-user in my youth, but I never stopped chasing the intoxicating art & music monkey. 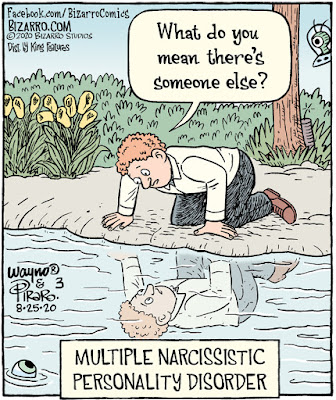 Don't you hate getting dumped by one of your other personalities? 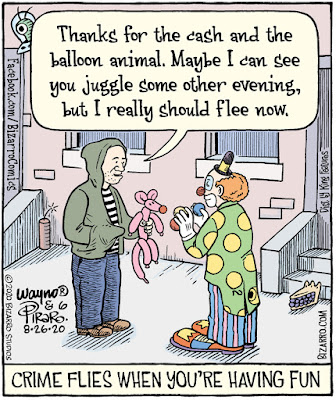 Wednesday's drawing and dialog were reverse-engineered to set up the weird caption. It's not a normal joke in any way, but we liked its surreal vibe, and ran with it. 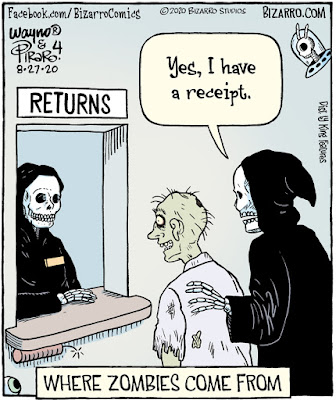 This one, on the other hand, is perfectly logical. 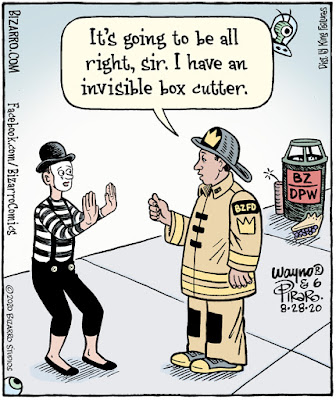 I thought this was simply a droll take on the cliched image of a mime trapped in an invisible box, but it prompted a wonderful analysis from a clever Bizarro reader:


My spin on today's joke by Wayno (8-28): America's evangelicals pretend to be trapped in some box of government oppression. Since the box is invisible, "fire" man T***p can promise an invisible solution!

Thanks to Bill in Massachusetts, for giving me a good laugh and a fresh take on my own work. Bravo! 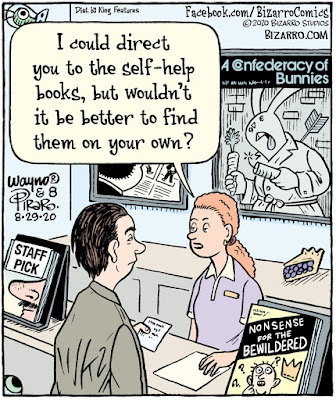 I generally try to keep my drawings simple and uncluttered, since they're often printed at a ridiculously small size, causing tinier details to disappear into solid blobs. For this one, I got carried away with extra bits of business secondary to the gag. MAD's Bill Elder referred to this sort of thing as "chicken fat." 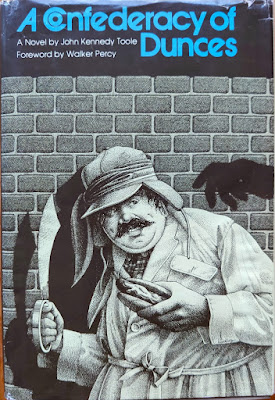 The "Bunnies" book poster is a parody of the first edition dust jacket of John Kennedy Toole's classic comedic novel, A Confederacy of Dunces. That cover was illustrated by Ed Lindlof in 1979 or 1980. 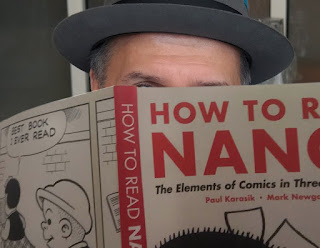 The second framed cover advertises Paul Karasik and Mark Newgarden's scholarly work, How to Read Nancy. The book earned an Eisner Award for Best Comics-Related Book, and is highly recommended. I'm still learning from it.

The strip version of Saturday's gag shows more of the Nancy cover, and also features a framed image of The World of Chas Addams. That's my kind of bookstore.

Come back next week for a fresh batch of funny pictures, and don't forget to visit Dan Piraro's weekly blog for his comments, plus a new Sunday Bizarro page.

Bonus Track
"Back to School Days" by Graham Parker & The Rumour

Wayno! I am so glad to know that you are a fan of A Confederacy of Dunces! I almost laughed myself to death when I read it!

I know it's a cartoon, not an encyclopedia or scientific article, so I'm posting this as a historical anecdote that I find interesting, not as some misguided attempt at "correcting" the cartoon.

During Benjamin Franklin's experiments with electricity, he thought he observed an "electrical fluid" flowing from the positive side of a circuit to the negative side. It wasn't until 150 years later that the electron was discovered, and everyone realized that the electrons are what flows around a circuit.

However at this point, everyone had been thinking about it the other way around so long that they kept the original conventions. To this day, when people are designing, drawing, or talking about circuits, they act like there's a flow of positive particles, when it's actually a flow of negative particles in the opposite direction.

In the end, there's no functional difference between a hypothetical positive particle leaving the positive terminal of a battery making it less positive (more negative) and traveling around the circuit to the negative terminal making it more positive (less negative) then the reverse of an electron going the other way and having the same affects on either end.

So the moral of the story is that even though batteries are depicted, by convention, as sources of positive energy, they are really sources negative energy. Not that this makes the cartoon any less funny; in fact maybe this added twist makes it funnier?

My source for this info is the highly recommended book "Make: Electronics" by Charles Platt. It's great for complete beginners of any age who want to learn about electricity, circuits, electrical components, etc in a hands on way.

Love ”Confederacy”, and I revisit it every few years.

Back I n 2006, I did a print of a page from an imaginary comic book version.

Thanks for the informative comments!

The discussion of Ben Franklin and the flow of electricity invites linking to this xkcd cartoon:

I guess I should have actually included the link: https://xkcd.com/567/