Production at Bizarro Studios North was interrupted this week, when a nor'easter blew through Hollywood Gardens, PA. Our part of the country was spared the worst of it, and we only had to deal with  nine or ten inches of snow. These arms were made for cartooning, but this week, they were a-shoveling. We hope everyone else who was affected by the weather is again warm and dry.

As we may have mentioned once or twice, we're going to celebrate the New Year with a new Secret Symbol. We're inviting readers to offer guesses and suggestions. We're inviting you to post and image on Twitter or Instagram with the hashtag #BizarroSymbol2021. You can also leave your ideas as a comment on this post. Eight readers will be randomly selected to receive a special Bizarro prize.

Next weekend, we'll reveal the new symbol, so everyone can watch for it on New Year's Day. We'll contact the prizewinners in January, and send out the prizes later in the month.

Now, let's endure a visit with the Ghosts of Comics Past. 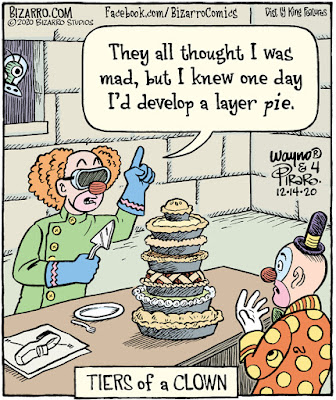 The drawing and dialog for Monday's panel were reverse-engineered to set up the punny caption. We're always up for another clown gag, so working it out was an enjoyable exercise. We offer our gratitude (and apologies) to songwriters Hank Crosby, Smokey Robinson, and Stevie Wonder. 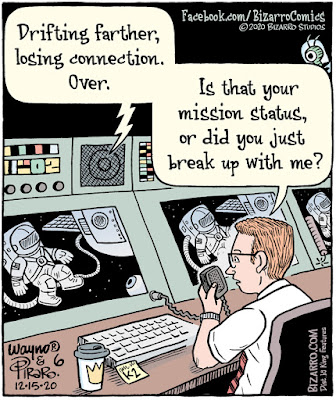 Honest communication is important in a relationship, but occasional misunderstandings are inevitable. 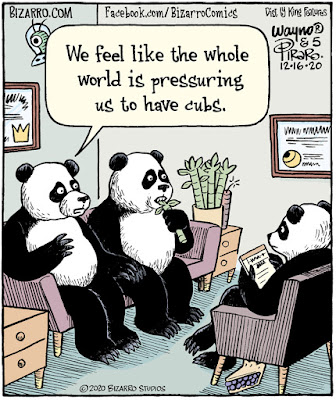 Many couples know this feeling, but it's worse for pandas. 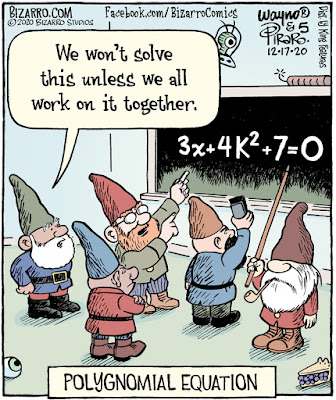 I believe that the single equation shown doesn't provide enough information to determine unique values for x and K, unless some sort of magic is involved. 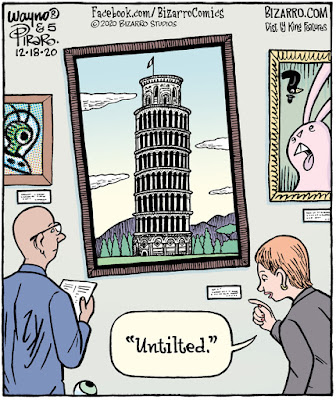 We strive to deliver a joke using as few words as possible, so we were rather pleased with ourselves for coming up with a gag using a single word.

Drawing this was a surprisingly disorienting experience. It never looked completely right to me, but I couldn’t figure out why... until Friday, after it was published, and a regular reader pointed out that the ground line should be parallel to the bottom of the frame. This bothered me all day, so I made a new version for my own files, and for readers of this blog. 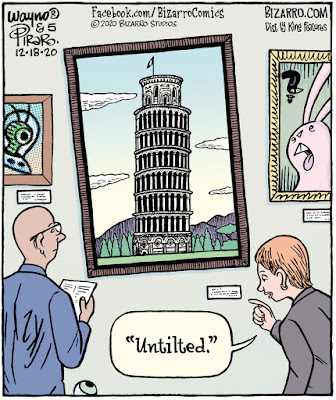 I felt a little better, and was able to sleep Friday night. 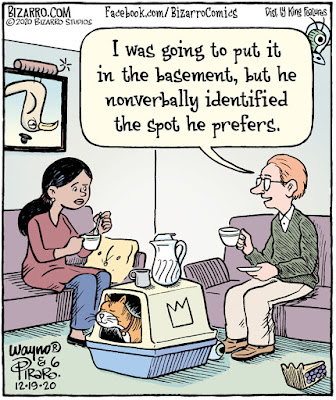 Throughout this year, how many of us have scrambled to relocate a litter box so it doesn't show up on a video chat?

Thanks for joining us again, and don't forget to send your guesses, suggestions, or crackpot theories for the new secret symbol. Be sure to visit Dan Piraro's blog for more color and commentary, and to check out his latest Sunday page.

See you next week. Right now, I'm off to begin preparations for Monday's low-key Winter Solstice celebration with my immediate household.

Here's a seasonal offering from my musical pals (Tom Roberts, piano & whistling; Dave Klug, drums & percussion) and me. We had to cancel our annual holiday show this year, but we're looking forward to keeping the tradition going in 2021.

Many of you are probably familiar with Leon Redbone's 1987 recording of this tune. Our piano man, Tom, was Leon's pianist and musical director for six years, beginning in the late 1980s.

When Leon passed in 2019, Tom shared some memories of his mentor and friend. We all think of Redbone every time we perform this song.

I think I the new secret symbol is a PIPE

Of course, the Bizarro guys might choose a pipe, just to prove him wrong.

Did you forget today's comic?

I think the new symbol might be a pickle as a nod to all of us jazz pickles?

My thought would be a string of pearls. I can see that sneaking in an awful lot of places.

Great idea! We do appreciate the Jazz Pickles.

@Dosbears, if you meant the Sunday comic, those are covered (along with the rest of the week) at Dan Piraro’s blog. Try https://www.bizarro.com/

No, it was Saturday, Dec 19 that was missing. That's the one with the cat's litterbox being used as a coffee table in the living room, because the cat indicated non-verbally that it should be placed there.

@Dosbears, apparently I did forget to include Saturday’s panel! I’ll update the post. Thanks for checking!

My apology to Dosbears for missing the correct point of their original comment!