Happy Saturday, dear readers. The madness that is 2020 continues to escalate, and we're in the weirdest December holiday season most of us have ever experienced. Even Santa Claus has outsourced toy distribution to an unproven startup group. 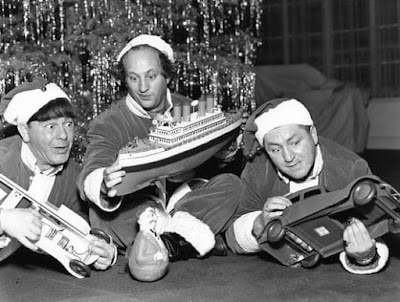 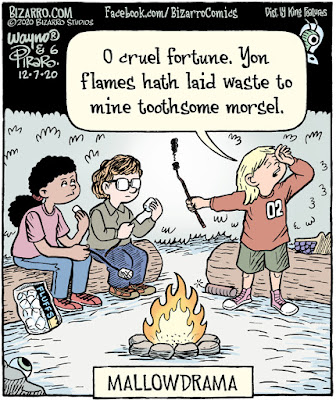 We kicked off on Monday with a gooey tragedy. 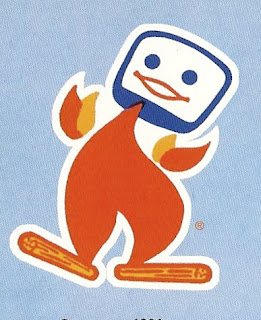 "Fluffs" is, as far as we know, a nonexistent brand of marshmallows. Campfire Marshmallows, a real company, was established around 1919. The image above is a 1980s version of their disturbing mascot, "Campy." Campy's feet are burning logs, and his body is made of fire. His body burns his head as he smilingly accepts his fate. 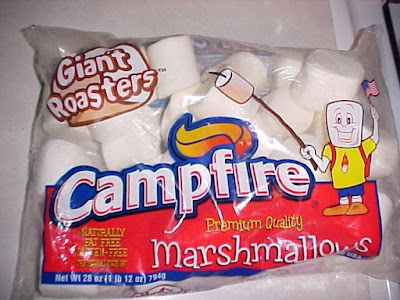 The current version of Campy is even worse. He's poorly designed, with an insipid, generic "cartoon" face. One suspects some Campfire executive's kid is responsible for this amateurish illustration. Worst of all, he's roasting the head of one of his own kind. 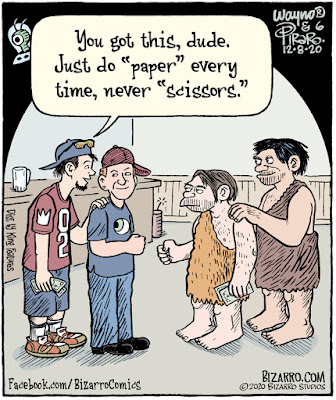 Oddly, they're all wagering with paper money. Neanderthals abide. 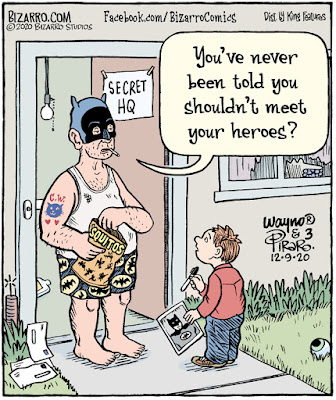 That creepy tattoo was the last straw for Catwoman.

The strip layout of this gag gave readers a peek at the rarely seen Batmower. 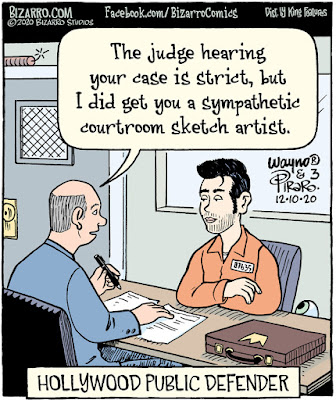 There's something about an orange jumpsuit on the red carpet. 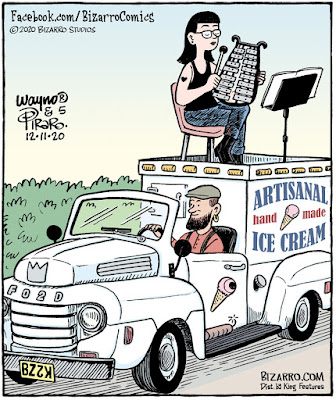 The panel art was too vertical to work well in the strip format, and required some creative rearrangement. Since the license plate was no longer visible in this configuration, we replaced it with the Lost Loafer, in order to maintain the Secret Symbol count.

Until this year, Good Humor trucks signaled their arrival with a music-box style recording of the ancient song "Turkey in the Straw." They wisely decided to drop that tune due to the many racist lyrics attached to it over the centuries.
Good Humor trucks now announce themselves with a new jingle composed and recorded by musical innovator The RZA, of Wu-Tang Clan. RZA donated his music, royalty-free, forever, to Good Humor, and to any ice cream vendor who wishes to use it. We tip our hats to Good Humor and The RZA. 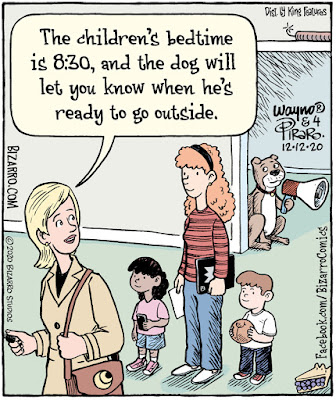 Saturday's panel salutes the adaptability of domestic animals. In my home, one of our cats has learned to step on the alarm clock and turn on the radio to remind us when it's breakfast time.

Remember, our new Secret Symbol makes its official debut on New Year's Day, and will be announced after Christmas.

While you're online, I recommend visiting Dan Piraro's blog to see what he has to say about this batch of gags, and to read his latest Sunday Bizarro page.

Comics writer Richard Gagnon recently interviewed me about Alphabet Soup Kitchen, a collaborative minicomic I did with fellow self-publisher Edward Bolman many years ago. It's featured on his informative blog, Who's Out There?

Note: Some YouTube videos are unavailable outside the US.

On some mobile devices, it may be necessary to select "View Web Version" in order to view the video.

1 : of, relating to, or characteristic of an artisan artisanal skills artisanal ingredients

2 : produced in limited quantities by an artisan through the use of traditional methods -- artisanal bread/cheese/wine

How about a missing sock puppet to go with the missing loafer?