Shortly after last week's blog went live, the winner of America's 2020 presidential election was announced. Across the country, people danced in the streets, except for those humoring a pouting toddler who's still screaming "No Fair!" in futile hopes of altering reality.

While we anxiously await the gracious concession speech, let's review our most recent comics. 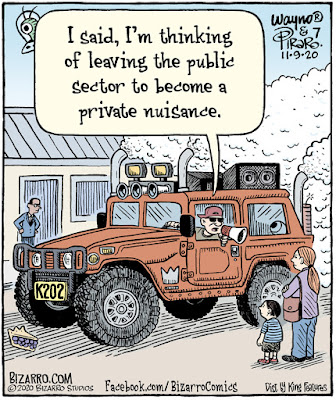 Monday's panel had quite a few readers drawing parallels to current events, but of course the timing was entirely coincidental (this comic was drawn in late July). Obnoxious behavior is apparently timeless. 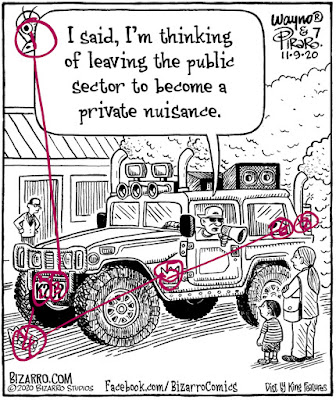 After I've finished drawing a comic panel, I add a Photoshop layer to make sure I've counted the Bizarro Secret Symbols correctly. I began doing this after a couple of comics were printed with incorrect numbers. Occasionally an error will get past me, but this review usually helps. My dear friend and musical bandmate Tom always reminds me to go back and do an "idiot check" when we pack up our gear after a gig. I now apply the idiot check to my comics work. 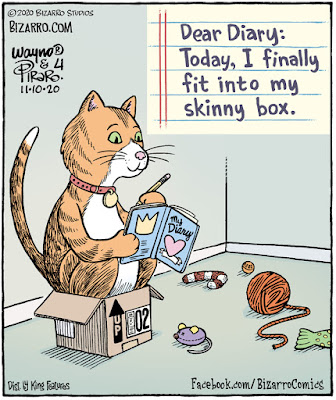 Since we've been avoiding unnecessary excursions, more and more cardboard boxes pass through our home. Anyone residing with feline family members will recognize this character's behavior. 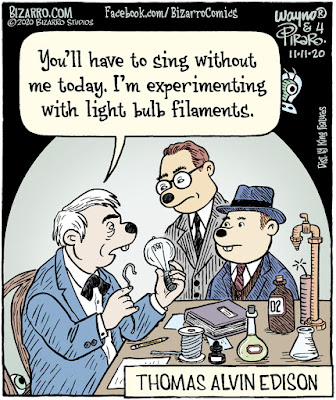 If he misses any more rehearsals, they'll have to postpone recording their new cylinder. 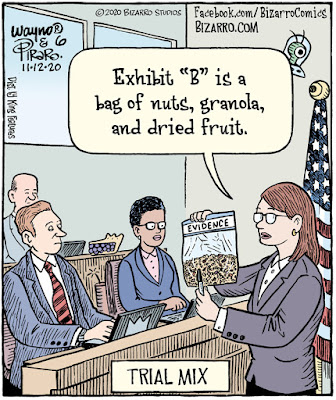 A scene from the Nature Valley Courthouse. 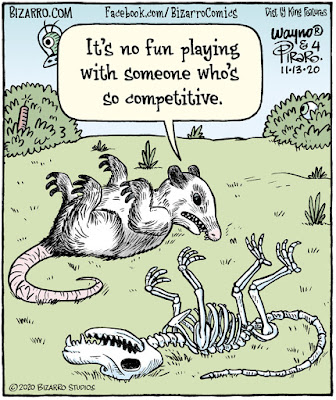 My drawing of the skeleton falls about midway between accuracy and fabrication. 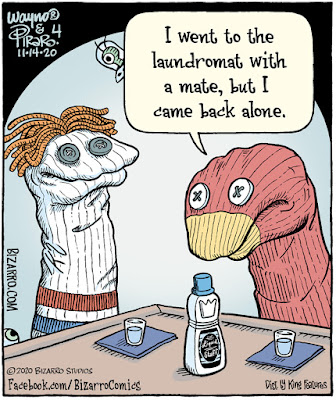 A sad but familiar story, with a linty aftertaste.

That's the roundup for this week. Thanks for following our shenanigans. Be sure to visit Dan Piraro's weekly blog, which updates on Sunday or Monday. If you haven't started reading his surreal western graphic novel, Peyote Cowboy, now is a good day to jump in for a brief escape from the whirlwind news cycle. 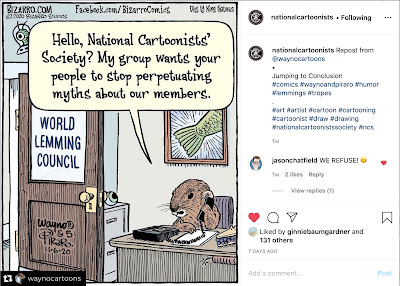 I was delighted to see last week's lemming cartoon reposted by the National Cartoonists' Society, with a forceful response from our president, Jason Chatfield: "We refuse!"

The Wizard of Menlo Park/Get the Phone
D. Beaver, from the 1973 LP Combinations
TMI Records, Memphis

Rather than subject you to the Chipmunks, here's a forgotten pop gem about Thomas Edison, with a coda for Alexander Graham Bell.

Last week I received an email from an old friend who years ago ran Pittsburgh's first all-used record store, where I spent many hours when I was supposed to be in classrooms. While writing this post, I remembered that he recommended this record to me, knowing of my fondness for quirky, smart performers like Sparks, Todd Rundgren, and Roxy Music, among others. Since we ran an Edison-themed comic it was the perfect week to share this tune.

1 As part of the artistic process, cartoonists and illustrators often refer to photos in order to make their drawings recognizable, if not wholly accurate. The image at the top of this post is a reference image I used this week while working on a batch of comics to be published next year. It was useful as a drawing tool, and makes for an intriguing preview thumbnail on social media links to the blog.

Thought this might interest you from today's LA Times
https://www.latimes.com/waxcylinderlosangeles

Thanks so much! That was a fascinating article and video. My friend Tom, whom I mentioned in the post, has a collection of 78s and cylinders, and I'm going to share this with him. He recently posted some photos of a cylinder that he's repairing.