The Girl Can't Help It

Sheltering in place has all of us spending a lot more time in front of our devices' screens. In the spirit of encouraging readers to get out and enjoy some fresh air (at a safe distance), I'll do my best to keep my comments brief this week.

With that in mind, here's a look at the week's cartoon offerings. 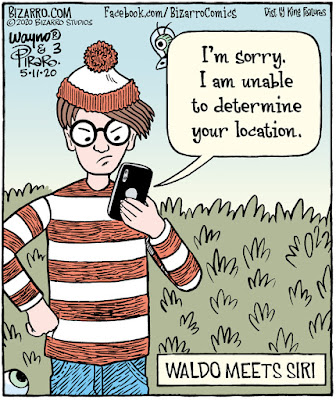 This character is impervious to spyware and tracking apps. The downside is he's unable to use navigation software.

The strip version of Monday's gag used a different setting and swapped out a Secret Symbol. 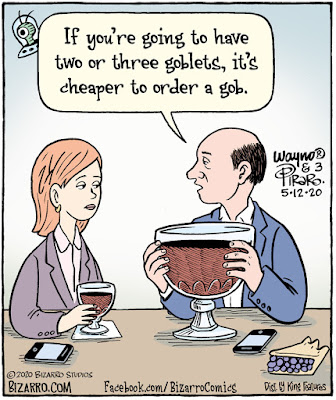 He also has advice on buying a toilet. 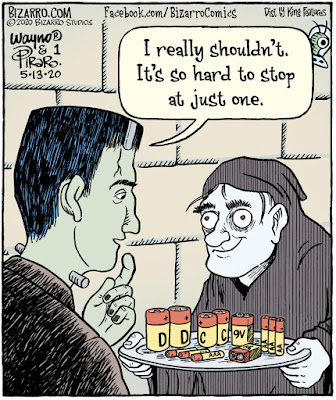 Many people commented on the hooded character being an homage to Marty Feldman's performance in the Mel Brooks film, Young Frankenstein. Although it's not really a caricature or likeness of the comedic actor, he definitely influenced the drawing. As Dr. Frankenstein's humpbacked assistant, I do think of Feldman rather than Dwight Frye, who appeared in Jame's Whale's 1931 Frankenstein film. I still picture Karloff as the monster, but certainly acknowledge Peter Boyle's greatness. 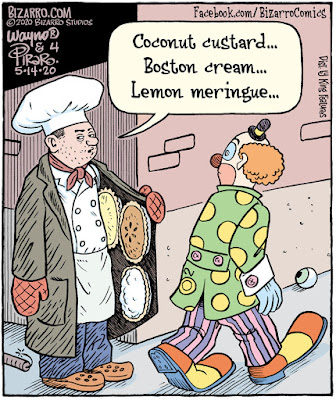 The unanswered question: Is this guy an arms dealer or a drug dealer? 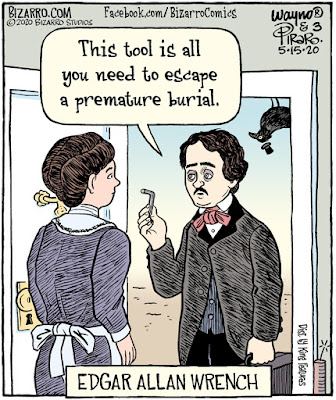 At one point, Poe was so strapped for cash that he is said to have burned his furniture to heat his home. Few biographers have noted that the furniture was from IKEA. 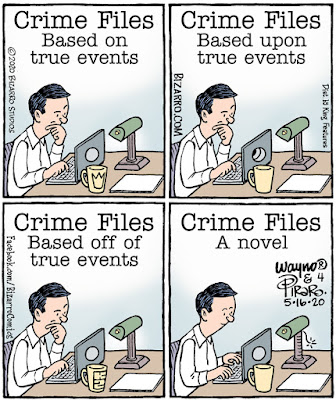 Writing is all about editing, and editing is about choices.

This past week, the world lost Little Richard, one of the founders or rock and roll, and certainly its most electrifying performer. When I hear his music, I wonder what it was like to have seen him when he burst onto the scene. He must have looked like a visitor from another universe. His music will live forever, which gives us some comfort.

I had to dig through the archives, but I located a partial portrait of Little Richard that I did in 1988. 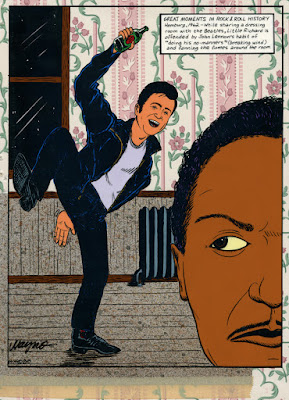 I believe I read about this in Charles White's excellent book, The Life and Times of Little Richard: The Quasar of Rock. Apparently, Richard was fond of Paul McCartney, who was a worshipful acolyte. Lennon loved Richard's music, but he was more irreverent.

If you're looking for additional comical reading material, you might enjoy visiting Dan Piraro's blog. In addition to insightful commentary, and well-crafted expressions of outrage and despair at the prospects for humankind, Dan also showcases his latest beautiful Bizarro Sunday page.

Love your cartoon and your blog. Thought you enjoy this: https://www.kcrw.com/music/shows/music-special/little-richard-interview-1984-beatles-piano-performance

Where was your Little Richard drawing published originally?

Thanks!
I’m looking forward to listening to that radio show.