Congratulations to us all for surviving another week of sheltering in place. Thanks to everyone who showed basic concern for fellow humans by limiting travel and wearing appropriate face coverings, especially where they're specifically required, in places like, oh, I don't know, perhaps the Mayo Clinic.

As we do every Saturday, here's a look back at this week's cartoon output. 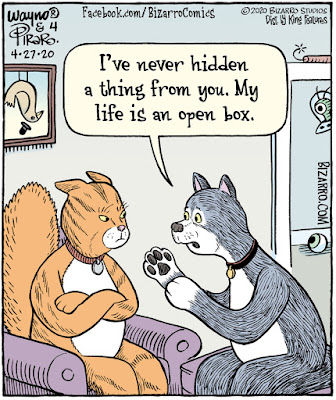 Monday's panel references the familiar phrase, "my life is an open book." I was thinking of a litter box with its contents uncovered, but some readers pointed out that cats are unable to resist an open cardboard box. 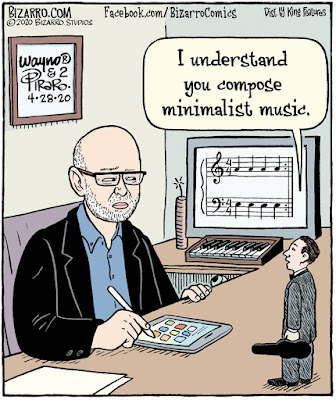 The drawing of the composer in this gag is based on Brian Eno, who is generally acknowledged to have coined the term "ambient music," and whose surname pops up frequently in the New York Times crossword puzzle. 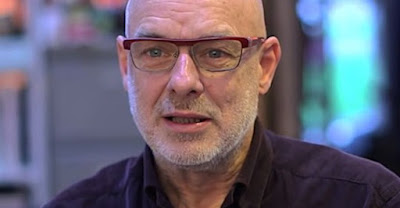 This gag wasn't the first time I've drawn Eno. The image below was done in 1978 for a music fanzine I published with a friend, and commemorates the release of Devo's first album, which was produced by Brian Eno. 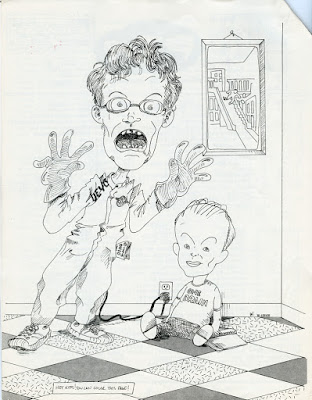 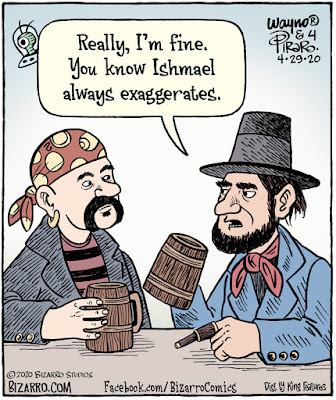 We all tend to embellish our stories over time, but that Ishmael really is full of krill. 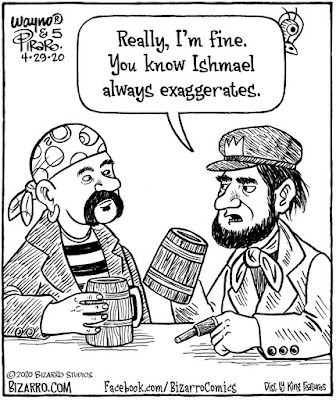 The first version of this panel showed Ahab wearing a sort of Greek fisherman's cap. I drew it this way because in the past when I drew the character in that weird tapered stovepipe hat, more than a few people mistakenly thought it was supposed to be Abe Lincoln. I ultimately decided to model the character after Gregory Peck's portrayal, with the tall hat. That cap just looked wrong. 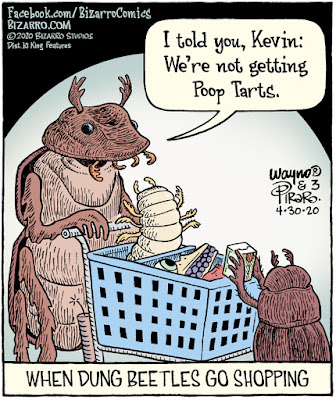 After a lofty literary reference, it was time for a scatological joke. We bounce from high to low humor here at Bizarro Studios. 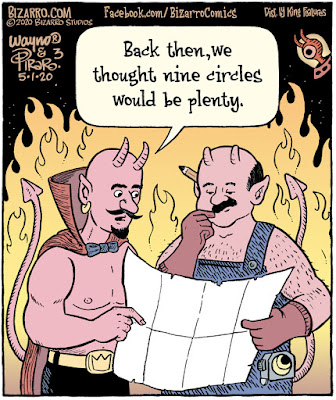 In recent decades, humanity has been working overtime in an effort to exceed historical standards of malefaction, and the Dark One decided to do an add-on. If Dante could only see us now. 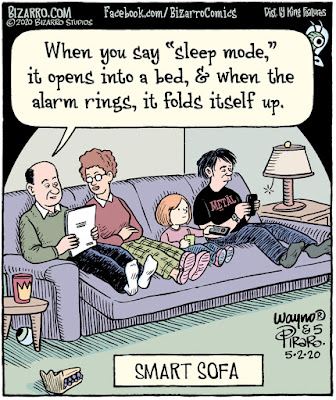 I suspect that this product may already exist.

Thanks for making Bizarro a part of your self-isolation. Be sure to visit Dan Piraro's blog, to see what he has to say about this batch of drollery, and to admire his latest glorious Sunday page.

Stay safe, Jazz Pickles. We'll get through the weird times.


An artifact from my record collection that fits in with the midweek cartoons. Cliff Ferré sounds to me like a poor man's Tom Lehrer, but I must admit to enjoying this shitty ditty.

Very funny song! I love the sound of the needle on the record! Thanks for your work - certainly brightens up my world.

Wow... from Melville to poop to Dante in just 3 panels. A person could get whiplash!

Thank you! I like that goofy song, too. With the needle drop, you’re hearing it exactly as I do here in my studio.

I wasn't aware that the minimalist panel featured Brian Eno. Not having ever seen a photo of him, I was unaware he looked so....normal. But can he really be considered minimalist? I've always thought his genre was described as ambient music. When I think of minimalist, my first thought is Philip Glass. Oh well. Potayto, potahto. PS, love the song selection this week.

Thanks for the comments, Kent. I've read interviews with Eno where he also describes having a minimalist approach to music, or doing "minimal versions," but he's more often associated with his term, ambient music. I think the distinctions overlap enough to get away with portraying him in this way, particularly since he wasn't explicitly identified by name. The way I'm think of the comic is that as cartoonist, part of my job is to be a casting director. So, I guess we have Eno playing a minimalist composer in my "production" here.

Yes, he's quite a normal looking gent. He could easily be a math professor or the guy who does your taxes. But when he was a member of Roxy Music, he was a full-on, glam-rocker, wearing lipstick, feather boas, and all sorts of outlandish fashion. Do a Google image search and see what you think!

I'm also a fan of his pre-ambient "song albums," the first four he made after leaving Roxy Music. They're all wonderfully weird, smart, mutated pop. I highly recommend the first two in particular, "Here Come the Warm Jets" and "Taking Tiger Mountain (by Strategy)."

Eno is endlessly fascinating and a brilliant thinker. He's a key figure in 20th century music.

Glad you enjoyed "The Pirate's Poop," too! That particular video was actually digitized from the LP in my own collection. I have a CD player/recorder, but making digital transfers and editing the files can become time-consuming, so I don't make many transfers. I feel I should spend my time working on the comics as much as possible.