The Pipes Are Calling

Happy New Year from Bizarro Studios. Congratulations for making it through what felt like the longest twelve months of the 21st Century. Let's hope things improve this year.

For your amusement, we present a review of our final gags of 2020. 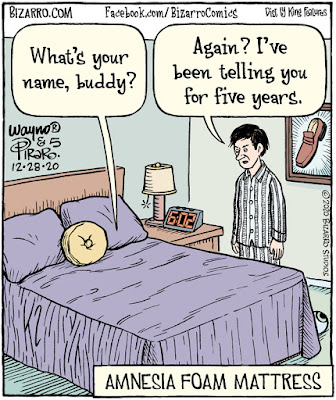 It's clearly time to replace that mattress. 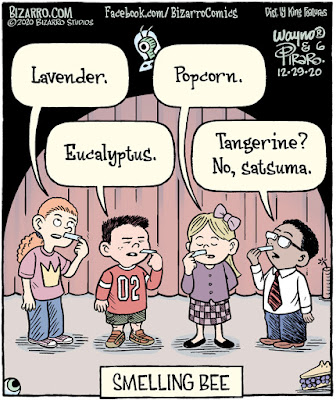 Although this gag was built on a simple pun, the layout, requiring four word balloons and a caption box, proved to be a little tricky. I also discovered that I have a lot of difficulty typing the word "eucalyptus." Fortunately, it doesn't come up often, only when I text my koala friends. 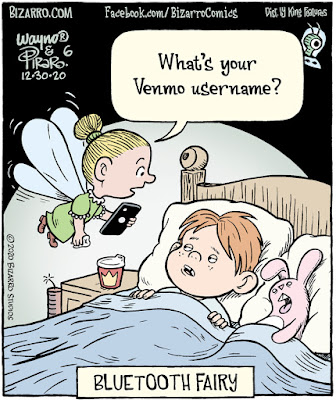 The latest example of the streptonym, a favorite form of worldplay at Bizarro Studios North. 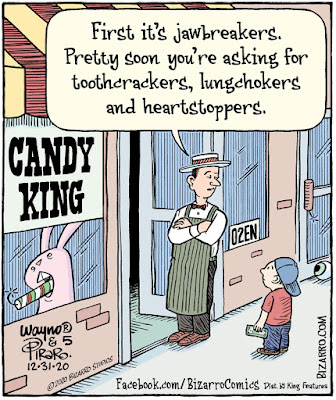 The final comic of December included two sticks of dynamite tucked into the art, including the rarely-seen peppermint twist variant. 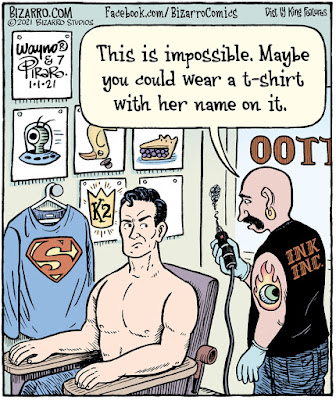 We kicked off 2021 with the official debut of Bizarro's new Secret Symbol: The Pipe of Ambiguity. I'm enjoying placing it into the art, but we probably won't add any more symbols in the foreseeable future. We have enough to keep track of as it is. 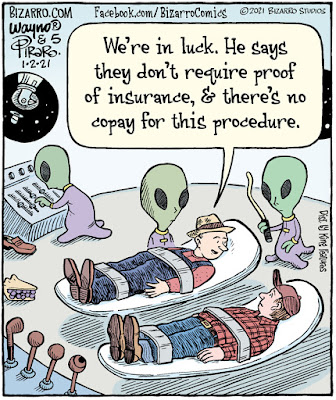 Perhaps the blowhard who spent the last four years promising a "phenomenal" replacement for the ACA was expecting extraterrestrials to miraculously deliver it. It wouldn't be the most outlandish idea he's floated.

Thanks for sticking with us as we send our words and pictures out into the world. We hope they provide a daily distraction and an occasional laugh. Please check out Dan Piraro's blog for his always-pithy commentary, and his newest Sunday Bizarro page.

Also, if you enjoy beautifully-drawn, surreal western adventures (and who doesn't?), you going to love Dan's graphic novel, Peyote Cowboy.

Photo Credit: A tip of the old porkpie to my good pal (and longtime comics hero) Bobby London, for the photo at the top of the post. 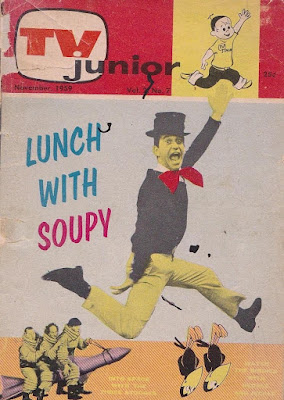 Bobby recently shared this scan of a TV Junior magazine from his childhood. It's his personal copy, ink stains and all, which he's held onto since 1959. When I saw it on Bobby's Facebook page, I immediately stole downloaded it.

The upside-down image of Heckle & Jeckle caught my eye, showing them to be ancestors of Bizarro's own Inverted Bird.

Bobby is currently hard at work on The Essential DIRTY DUCK, to be published by IDW. 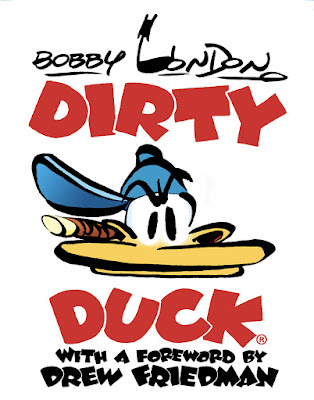 In addition to collecting his long-running strip from the pages of National Lampoon and Playboy, the book will include a biography of the artist and some other surprises. It's already on my wish list. Bobby is one of the giants, and it's gratifying to know Dirty Duck is getting a proper book collection.

Our closing tune has no connection to any of the week's comics. It's just a goofy record that I love.

This 1968 single is the only known release by the Family Frog. I've never located any information as to who's responsible for this oddball gem. It may simply have been a bunch of studio players having fun between takes, imitating Bob Dylan singing a Beatles song.

I first encountered this humorous version of "Help!" on a Bonzo Dog Band bootleg LP released in 1976. For years I thought it was a rare Bonzos outtake, but it was only a bit of mischief perpetrated by whoever issued the bootleg album.

If you're into weird versions of Beatles songs, might I suggest The Chipmunks Sing The Beatles.

It's only my take on this, but I suspect The Family Frog may have something to do with The Turtles. It's on their label and it was relased the same year The Turtles Present the Battle of the Bands. And frankly, they're daft enough.

Yes! I do have a copy in the collection, though I rarely listen to it.

That’s a pretty solid theory! It would fit right in with their Battle of the Bands approach, and they were definitely a group with a sense of humor.

Interesting that it's a bogus Dylan cover and the B side is a song actually written by Dylan, The Mighty Quinn. I couldn't find anywhere to listen to that though so I don't know if it might be made to sound like the Beatles covering Dylan...flip side literally...

Now that would’ve made a great single, but alas, the flip side is also performed in that fake Dylan voice.

I was almost certain you would own a copy. Our tastes in music are frighteningly similar.

Kent, as a fellow music nerd, you’ll appreciate this. I don’t have the full “Chipmunks Sing the Beatles” LP, but I do have the seven-inch EP, with hard cover, plus the jukebox title strips and tiny cover art repros. It’s a beautifully goofy artifact.