As the days of weirdness and distancing blur together, we're trying to maintain our sanity by sticking to a regular schedule. That includes faithfully composing a weekly blog post review of the latest Bizarro cartoons. Here's a look back at the week of July 6. 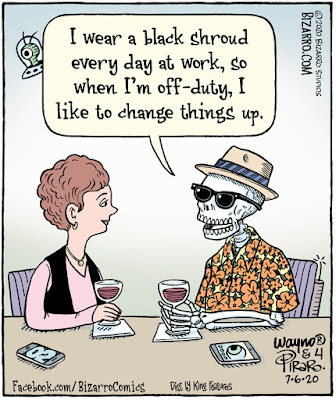 Outside the office, he's pleasant enough.


A few friends mentioned that the off-duty Reaper dressed like yours truly. I'll concede a resemblance from the neck up, but I haven't worn aloha shirts in many years. Still, that one looks comfy.

We can't see beneath the bar, but if he's wearing a pair of Chuck Taylors, maybe I was in fact drawing myself. 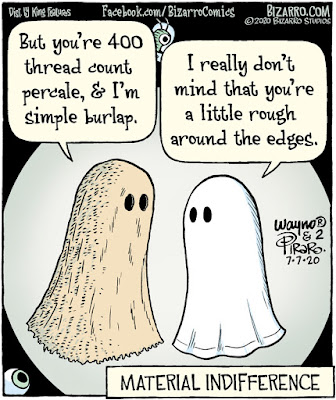 I thought it would be quick and easy to draw a gag featuring two ghosts, and while it didn't take as long as some more elaborate panels, I spent a fair amount of time on the burlap texture and shading. 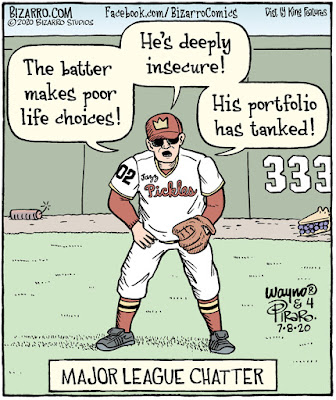 Readers, do you remember baseball?

When I was a youngster, I was forced to join Little League. One team (not mine) developed a chatter method that was eventually banned. In place of the usual cries of "Hey, batter batter," the entire team counted down from five, and then simultaneously yelled, "Swing!" It was surprisingly effective, and started many fights among players, parents, and coaches. That's some fine character building right there, my friends. 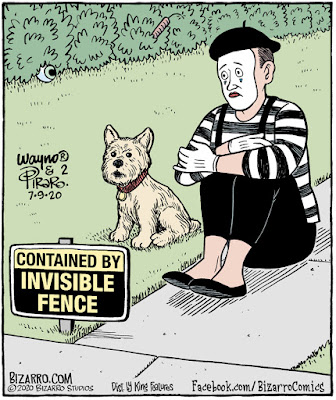 Only one of them is wearing the electronic collar. 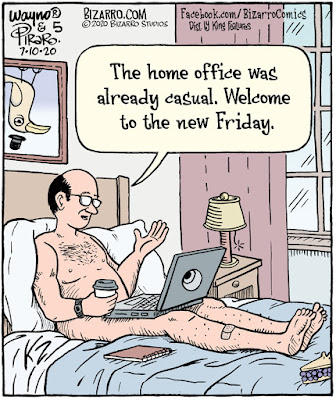 This is a pre-pandemic drawing of a typical corporate Help Desk. Overheated battery packs are a hazard of the profession.

If you found this image disturbing, just imagine drawing it. I had to take frequent breaks, but it's my duty to deliver the comics for you, dear Jazz Pickles. 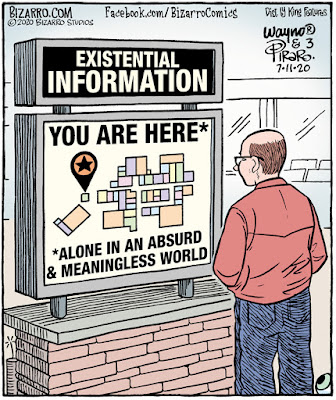 I've done quite a few gags involving mall information kiosks, and this one may be my favorite. In recent months, however, we all may feel like we're stranded in the Kierkegaard Galleria.

We at Bizarro Studios hope that our daily comic provides a momentary distraction from troubling realities, and occasionally lets us laugh at them together, even while isolated.

Don't forget to pop on over to Dan Piraro's blog, where he shares his latest Sunday Bizarro page, and offers commentary on these gags, along with other opinions and insights. His thoughts are always worth reading.

On Monday, July 6, Ennio Morricone died in Rome at age 91. Morricone was one of my all-time favorite composers, as I've mentioned in this blog a few times.

While working on comics this week, I've been revisiting the Morricone recordings in my music collection, and have been filled with joy while marveling at his many works of genius.

The title of today's post, Magic and Ecstasy, was taken from another great Morricone composition.

Thanks for stopping by. Keep yourselves and your families safe and healthy.

See you next week.

Always enjoy your weekly roundup of the cartoons with all the commentary.

Look at the bright side. With the laptop heater, he is reducing his odds of procreation.