Get Off My Back

Today is the beginning of the Year of the Rat. Whether you celebrate Lunar New Year, Gregorian New Year (January 1), or none at all, I hope 2020 treats you well.

Let's look back on this week's (rat-free) Bizarro comics. 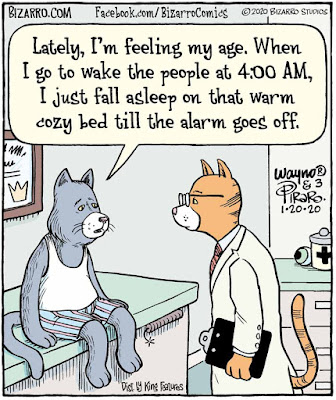 We started the week by combining two recurring topics: cats and a doctor's office. My spouse and I live with two feline family members, who regularly demand breakfast much earlier than we'd like. One of them has learned to turn on the clock radio. On particularly frigid mornings, they sometimes choose warmth over food, which inspired this cartoon. 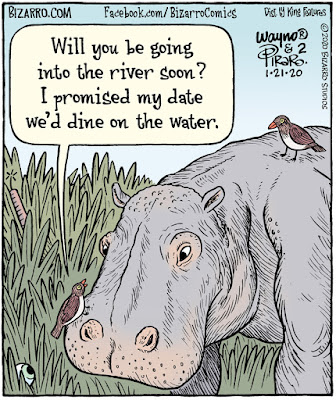 Working on Tuesday's gag proved to be a rich educational experience. My search for high-resolution reference photos taught me that hippopotamuses are repulsive up close. To be fair, they're probably put off by humans. I also learned that the birds who eat ticks from the hides of hippos and other creatures are called oxpeckers, and that their eating habits aren't mutually beneficial, as was once thought. They're now considered to be parasites, since they often pierce the skin when pecking at ticks, and cause injury or infection.

The strip layout of this gag  required some additional flora. 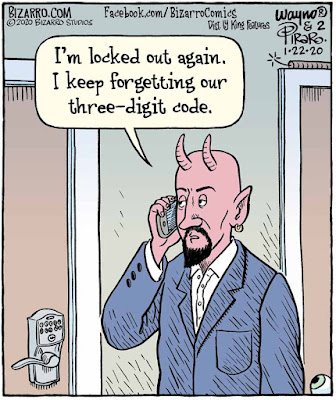 Multiple commenters on one of the social networking platforms mistakenly thought they were being asked to guess our dapper devil's entry code. Others assumed they should explain the joke to your cartoonist. 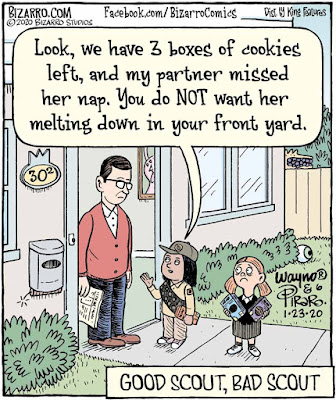 There's a thin (mint) line between marketing and racketeering. 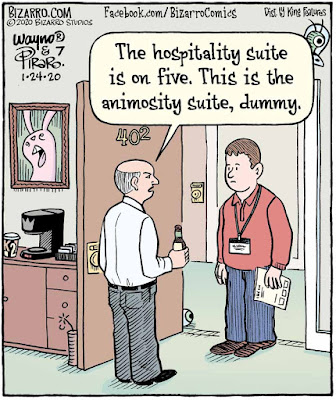 Friday's panel shows the influence of Sam Gross's 1970s work in National Lampoon, although if Mr. Gross had done this, the last word of dialogue might have been "asshole." 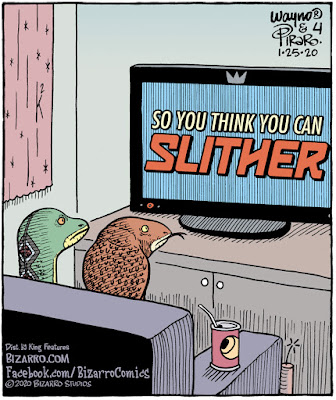 This program runs back-to-back with America's Got Scales.

Thanks for following for yet another week. Don't forget to visit Dan Piraro's blog, for additional commentary, and a shiny new Bizarro Sunday page.

Dan also reported on a comic being removed from his Instagram feed for a supposed violation of Instagram's "hate speech guidelines." The comic is still up on my feed, and apparently IG is okay with the many hateful comments posted in response.


Sparks, the musical project of brothers Ron and Russell Mael, have been active since 1972, and have released more than two dozen albums. Their music is consistently funny, smart, and unique. The brilliant filmmaker Edgar Wright is working on a Sparks documentary, which we at Bizarro Studios can't wait to see.

I once wrote a poem about the relationship between the rhinoceros and the oxpecker, but the research you did for Tuesday's cartoon has invalidated it, alas. Oh well, such is life. Here it is anyway:

The Rhino's Guard
The bond between the rhinoceros
and the oxpecker bird
may seem on the surface
kind of strange, even absurd.
But if you understand
the deeper logic,
you'll see their relationship
is symbiotic.
The oxpecker eats
parasites which
make the rhinoceros
itch and twitch.
The nearsighted rhino
has enemies it may be missing,
so the oxbird warns it
by screaming and hissing.
The oxpecker serves as an alarm
and a pesticide.
In return it gets free meals
as well as a free ride. - Jeff Barnes

I think the dapper devil's problem stems from the fact that every button is labelled "6".