We're approaching the end of 2019, which will mark the close of my second year as Bizarro's daily cartoonist. With the first 600-plus cartoons in the rear-view mirror, I'm ready to accelerate into 2020.

Actually, because of our deadline schedule, I've already completed and uploaded the first several weeks of 2020. So, we have fresh gags in the warehouse, ready to deliver to your screens, or, for those whose cities still have them, daily newspapers. 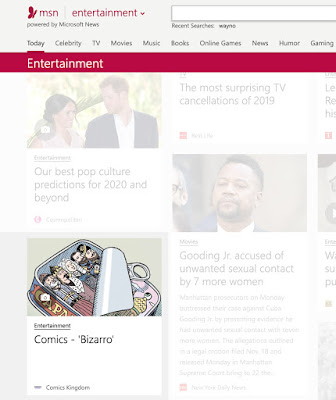 Speaking of papers, as the newsprint biz continues to oxidize and crumble, we were heartened to learn that Bizarro is now carried by The Microsoft Network, so we'll soon be popping up anywhere among MSN's many sites, portals, and apps.

Here's a look at our most recent offerings. 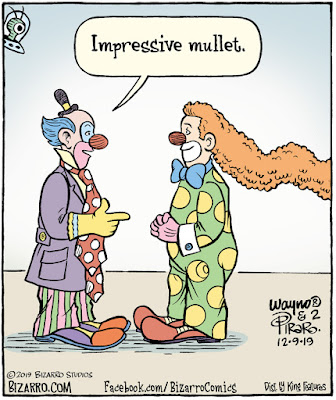 The week started with the latest in our long-running (or never-ending) series of clown-based gags.

The strip layout gave me more space to exaggerate the length of the protagonist's coiffure. 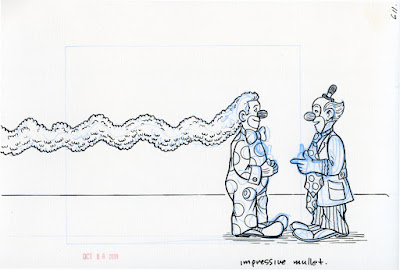 I normally draw the original art for the standard vertical panel layout, and figure out how to make it strip much later in the process. In this case, I planned ahead and turned my Bristol paper sideways to extend the drawing. I believe this is the first time I consciously planned the strip layout at this early stage. 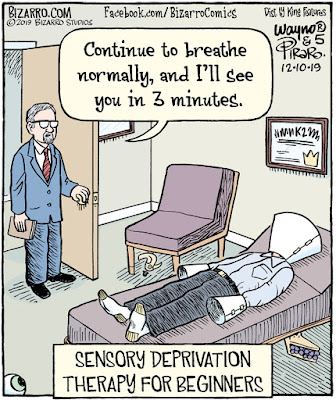 I'd like to try out a session in a sensory deprivation tank sometime. This office lets patients dip a toe into the salinated water before going into full-on darkness and silence. 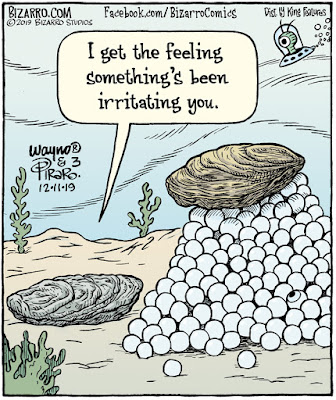 Bivalves are apparently adept at reading their partners' nonverbal messages. 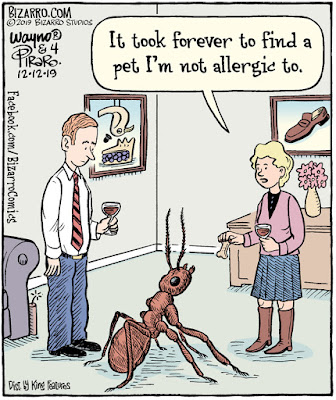 As with the oysters above, I enjoyed drawing the ant as realistically as my capabilities allow. When I look at this one, in my head I hear the pet making an excited clicking sound as it awaits its treat.

I know, cartoonists are weird. 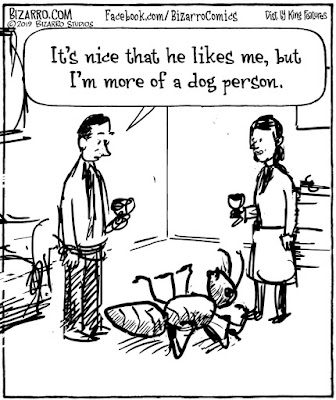 My initial sketch was slightly different. I liked the image of people nonchalantly accepting a giant insect as a domestic pet, but I felt it could be improved if I worked at it a little more. 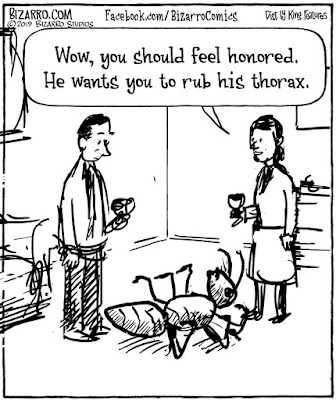 This revision added the funny-sounding word "thorax," but we weren't quite satisfied with it yet. Finally, we came up with the idea that an ant might be appealing as a pet because it's hairless, and ran with that. 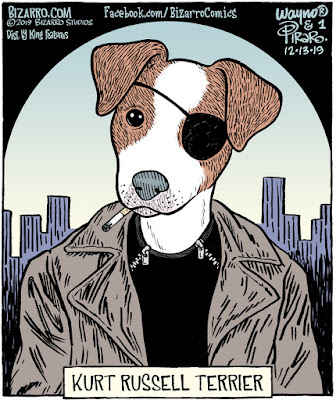 This pup is responsible for one of those new designer breeds after mating with a Goldie Retriever.

This isn't the first time Bizarro tweaked the popular Jack Russell Terrier. This panel ran six years ago, and referenced an actor from an earlier era. 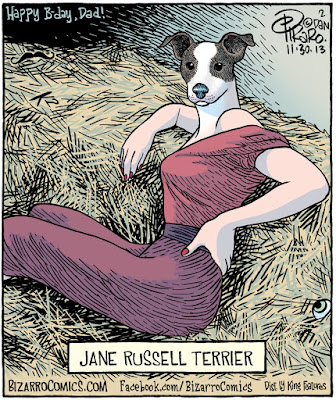 I could claim that my gag is a callback to the 2013 panel, but honestly, I'd forgotten about the earlier one until Dan Piraro recently reminded me. I suspect there are many other possible Russell Terrier breeds waiting to be identified. Feel free to add yours in the comments. 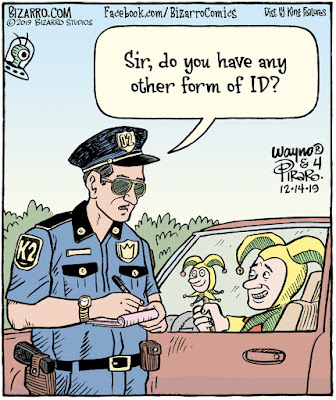 I'm not sure whether this qualifies as a second clown gag of the week, but certainly jesters are at least related to clowns.

Incidentally, that little scepter resembling its owner is called a marotte. It would be kind of cool to see these become a fad, with all sorts of people carrying around small effigies of themselves. Get on it, kids!

Be sure to take a look at Dan Piraro's blog, for even more behind-the-scenes discussion, and to see what he's come up with for his latest Bizarro Sunday page.


Monday, December 9, was the 75th birthday of one of my musical and comedic heroes, Neil Innes. This is the title song from his first solo album, released in 1973. 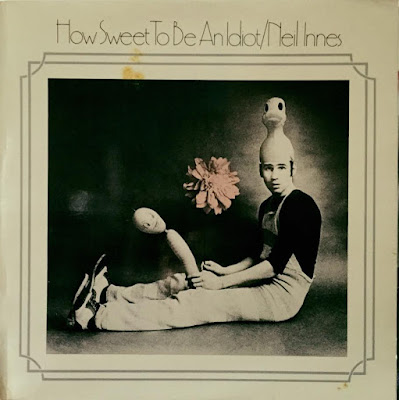 Neil was co-leader of the Bonzo Dog Doo-Dah Band, beginning in the 1960s. The Bonzos famously appeared in the Beatles' Magical Mystery Tour film, performing their song "Death Cab for Cutie."

If you're a Bizarro reader, there's a good chance you've heard some of Neil's music. He worked with the Monty Python troupe, and wrote the original songs for Monty Python and the Holy Grail. He also wrote the music for The Rutles, and appeared in the special All You Need is Cash, along with Eric Idle, as members of the "Pre-fab Four."

As a teenager, I was such a fan, that I made a duck hat like Neil's after I spotted a "Quacksie" plastic pull toy in a store and recognized that it was what he used to create his signature headpiece. 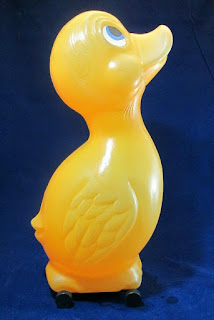 Sometime in the 1980s, I read in a fan club newsletter that during a Canadian Python tour, Neil's duck had disappeared, along with most of the group's wardrobe. I contacted Neil through the club, and sent him my duck, which I believe he still has to this day. Later, I received a very gracious note of thanks, along with an assortment of photos, posters, and other memorabilia, which are among my most treasured possessions.

Somewhere, perhaps at my parents' house, there's a photo of me wearing the duck. If I ever run across it, I'll certainly share it.

That Neil Innes story is so cool! Thank you for sharing! Also -- a Ken Russell Terrier might be rather bizarre, don't you think?

Incidentally, last night I had a dream in which I met Dan Piraro. He was driving a big touring bus with Bizarro art painted on the sides!

Wow! What an entertaining dream! The Bizarro tour bus is a hilarious idea.

A Ken Russell Terrier? That would be interesting, to say the least.

I enjoyed these but why does the ant have moth antennae?

I love the weekly zaneyness flowing from your (and Dan's) pen. I suspect many of your fans are old enough to remember Nipsey Russel, the post laureate of television.