Once again, I have the privilege of seeing one of my gags drawn by Dan Piraro for his Reuben-winning daily comic, Bizarro. It's a spin on the long-standing comic cliche of a guy slipping on a banana peel. 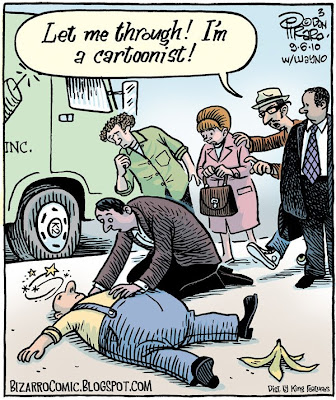 I've read various accounts tracing this to the early days of music-hall comedy at the turn of the 20th century. One site I came across claims it's rooted in an actual urban hazard, and that rotting banana peels were all over city sidewalks before anti-littering laws became commonplace. Whatever its origins, it's become visual shorthand for a simple joke.
In a neat little Hitchcockian stroke, Dan depicted himself in the cartoonist's role.
Here's the sketch I submitted to Mister P: 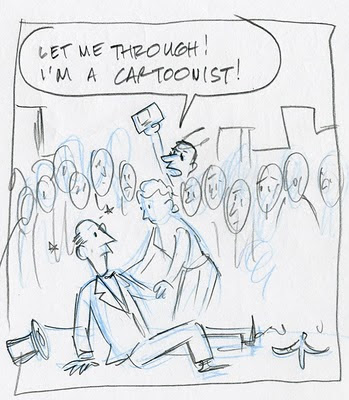 Dan chose a rather elegant way of using three people indicate a crowd, rather than drawing the dozen figures suggested by my sketch. Now that I look at it, I think I was drawing myself as the cartoonist in this version.
My original showed the victim as a high-hatted dandy, which I imagined as a cross between Ebenezer Scrooge, the Monopoly game's Rich Uncle Pennybags and The New Yorker's Eustace Tilley. This is the traditional motif, where a confident, pompous character gets his comeuppance by slipping on the peel, and is cut down to size in front of onlookers. Dan shows a working stiff in overalls (perhaps the driver of the nearby delivery van) as the unfortunate victim of the stray banana.

As usual, Dan's changes streamline and improve the cartoon. In my sketch, the stuffed-shirt in the top hat distracts the reader, taking attention away from the cartoonist muscling through the crowd. The crux of my gag is that the guy busting his way in isn't offering medical or legal help, but instead wants to document the other fellow's misfortune as a drawing. The cartoonist is the real butt of the joke.
Thank as always to the gracious Mister Piraro, for exposing his audience to another of my gags. All of our previous collaborations are viewable by searching this blog for the Bizarro label. There will be a few more in the coming weeks. Watch this space!


If you're a Facebook user, please consider joining my Artist's Page. Also, please check out my prints of musical performers, which are available from Portland's RockPop Gallery.
September 15 Update:

At the risk of creating an infinite loop, here's a link to Dan's blog, with his comments on this comic.

This one is difficult to compare because of the bare bones rough that you did. Your collaborator did do a really nice job and it's a very funny bit. I like the fact that he used a working class guy as the victim.

But I miss the cartoonist's sketchbook in the finished art! To me that made it funnier!