Here's an email interview from March 2006. A blogger submitted the questions to me, but he abandoned the blog and it was never published. I don't think I'm responsible for his disappearance, but you never know.

1. What is the last record/CD that you listened to?
Ghost Dog: The Way of the Samurai (Japanese version) by The RZA.
This CD is different from the version released here in the US, which included a lot of vocal numbers. This Japanese release is the (mostly) instrumental score, consisting of RZA's sonic collages. It's absolutely hypnotic. 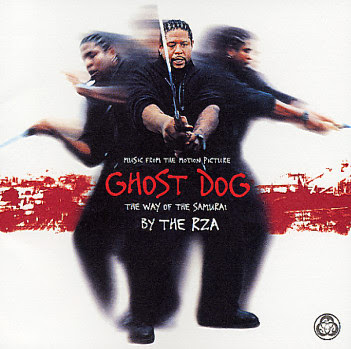 2. What is your earliest music memory?
I was on a local kids' TV show here in Pittsburgh at the age of about eight. I wasn't a regular cast member or anything; local kids could sign up to be guests around their birthday, so it was just a one-shot thing. There were around 6 or 8 kids on the show each day, and the host would interview each child, and ask them to tell a joke and sing a song. I sang the Yogi Bear theme.

A year or two later, my younger brother appeared on the same show. He completely clammed up and just stared at the camera, like one of those kids from "Village of the Damned."


3. What is the first record you bought?
Redirecting my lunch money, I bought a 45, "Gizmo," by Jimmy Heap, from a fifth grade classmate. Years later, I was thrilled when the song turned up on a bootleg CD compilation.

1: A country/blues version of The Cramps. In the early 1990s I played harmonica and sang in a cartoonist band called the Sin Alley Katz. The band also included JR Williams on vocals and electric ukulele, Mary Fleener on bass and vocals, Mary's husband Paul Therrio on lead guitar, mandolin and sax, and various drummers. We'd regroup every year for the San Diego Comics Convention. 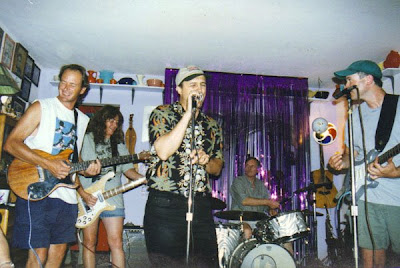 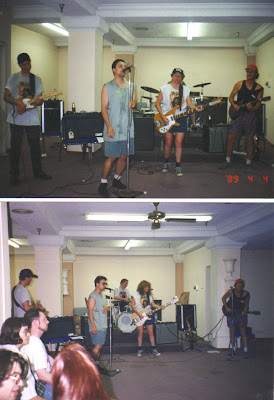 b) A bunch of spastic Sun Records rejects: In the early 80s, I played guitar (badly) in a rockabilly-inspired trio called The Rumble Strips, with my friends Jim Spitznagel (bass) and Kathleen "Crash" McCollum (vocals). We couldn't find a drummer, so I also programmed and triggered a dirt-cheap rhythm machine when we played live, and on our only recording, a 6-song vinyl EP.

5. What would one find most surprising about your music collection?
That would depend on who you asked, I suppose. People who know me from my involvement in the world of oddball music might be surprised at the amount of straight-ahead jazz I listen to. It accounts for about a quarter of my collection. I'm a big Frank Sinatra fan too.

6. What is something you like to play at maximum volume?
The Pixies' album Surfer Rosa. It's one of my absolute favorite records of that era, and I'm sure that listening to it in the car will accelerate my eventual hearing loss.

7. The first concert you attended was?
It was either Emerson, Lake & Palmer or Frank Zappa. I can't recall which one was first, but I think I saw to both of these shows when I was in tenth grade.

8. What is your favorite music moment that involved yourself?
Two answers, again:

a) A couple years ago, during the (alcohol-free) intermission of the annual University of Pittsburgh jazz concert, where I volunteer as stage manager, Joe Lovano and I crashed a nearby wedding reception to score some drinks.

b) Learning all of the lyrics to Chuck Berry's "Too Much Monkey Business."

9. What is a song or album from an artist or band that you generally don't like but for some reason like this by them? 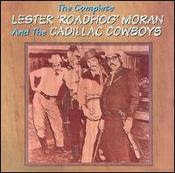 I absolutely hate the Statler Brothers, and their bland country harmonizing (despite endorsements from Johnny Cash). They sound like a bunch of weenies to me. However, they released a great comedy album called Alive at the Johnny Mack Brown High School under the pseudonym Lester "Roadhog" Moran and the Cadillac Cowboys, which I like a lot. Ostensibly a send-up of inept musicians, this CD (which collects two rare LPs) is infinitely more enjoyable than any of their "legitimate" releases. As comedic country music goes, they're still not in Homer & Jethro's league.

10. What is one record/CD that you think everyone should have in their collection? 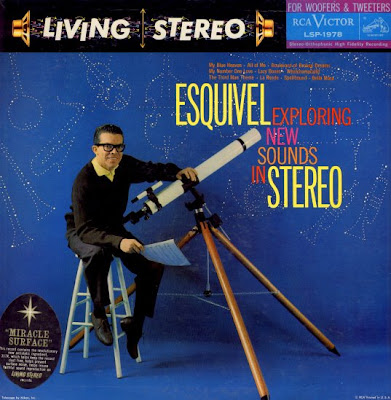 Esquivel's Exploring New Sounds in Stereo. This was the album where Juan Garcia Esquivel really nailed his signature arranging style, and it's a joy to experience his playful genius.

His reinventions of familiar tunes ("Third Man Theme," "All of Me," "My Blue Heaven") were as radical as anything happening in any musical genre. It also includes "Whatchamacallit," an Esquivel original that I never get tired of hearing. I'm a big fan of Hoagy Carmichael, so Esquivel's unique take on Hoagy's "Lazy Bones" is yet another reason to find this album, in any format. The mono version of the LP was titled Exploring New Sounds in Hi-Fi. I find the "Hi-Fi" version of the cover art to be more visually pleasing.

I once heard an Esquivel tune on a radio show featuring John Zorn playing music that influenced him, and he described Esquivel's music as "a beautiful pop mutation," that's about the best description I've ever come across.

It's all so true! Statler Brothers SUCK! Lester Moran RULES! People who know you from your involvement in the world of oddball music ARE surprised at the amount of straight-ahead jazz you listen to!

Surfer Rosa, huh? How strange. I'm a huge fan of everything AFTER Surfer Rosa. That TV show was right! It takes different strokes for different folks!

Oh yeah! "Monkey Gone To Heaven" was post-Rosa, and it's great.